No Guts, No Glory

How one popular show has let viewers down this season, while an underrated show has one of the best writing teams for a show today, and what these shows have taught me about writing.


It is true that each genre has its own requirements. The cops can't solve the central crime on page 50 of a novel. If the presumed couple in a romance got together in the first chapter what would the rest of the book be about?

And there's no denying that suspense requires, well, suspense. Things have to keep building up to the climax, often without relief as the story progresses.

However, I've started to develop an annoyance with stories that continue to delay events and push them further and further back, teasing the audience with minimal progress, for the purpose of creating cliffhangers. It's one thing if a cliffhanger flows organically from the events, but when a whole lot of not much happens on the way to a major revelation cliffhanger it gets frustrating.

As I draft this, I'm anticipating the season finale of The Walking Dead, and I'm ready to question if the show has lost its balls this season.

Remember the days when no core character was truly safe? From season one through season five, even regular cast members met their end with regularity. Season one we lost Ed, Amy, Jim, Vi and Jacqui. Season two deaths included Sophia, Dale and Shane. Season three T-Dog, Lori, Merle and Andrea all bid adieu. In season four we lost Karen and David, Herschel, The Governor, Mika and Lizzie. The major death (Herschel) was mid-season and the loss of Mika and Lizzie in episode 14 was more than enough to carry the shock through to the next season.

In season five we lost Bob, Beth and then Tyreese. And, although his time on the show was short, the shocking death of Noah was a loss that was keenly felt. In fact, it made one of our teenagers swear off the show because they were upset. They did get over it, and did watch again.

But that teenager quit the show this season because they found it boring.

The thing is, I get it. The dilemma of putting the group in a presumed safe environment can limit the opportunities for the type of action and perpetual discovery/encounter of others that works when a group is in motion. The second half of season four saw the group split up and all in motion, and the result was that they all encountered different groups and threats and the tension was a natural byproduct of their vulnerability.

Since the group has been at Alexandria, Noah is the only non-original-Alexandrian who has died and we haven't lost a starring cast member since Tyreese died over a year ago.

Is it realistic because the walls do offer them a safety they didn't enjoy when on the road? Or is it that the show is unwilling to sacrifice core characters and has substituted secondary deaths to try to maintain a sense of loss?

This season we've lived through the uncertainty of Glenn's demise. Three full, long episodes - with the actor's name removed from the credits - passed before Glenn's fate was revealed.

And a lot of people were pissed.

Now, as I draft this, I'm facing the speculation. I might have to amend my thinking slightly if the speculation isn't correct, but read after read suggests we'll endure 80 minutes of the extended finale before Negan makes his debut, only to be left waiting until the fall to find out who Negan kills. And I admit if that happens, I'll be pissed.

It's felt like a season of waiting. The quarry walker thing felt contrived. Why they didn't toss balloons filled with gas into the pit and then drop a molotov cocktail in there? They had balloons. They had gas and were willing to spend it driving vehicles for miles and miles. And they've established that walkers are attracted to fire. Why leave the walkers "alive" and just lure them away? To create a false scenario and threat that would temporarily separate a few groups from the community to fill the time before we met the Hilltop and the Saviors.

I'm all for character development. I listed the deaths of Karen and David because the significance was elevated by the impact those events had on Carol and Tyreese, and it pays off with one of the most poignant scenes of the entire series.

And I'm fine with slower episodes that build towards events organically. What gets annoying is when it feels like the writer(s) are holding back events for shock value or for the sake extending a story or series unnecessarily.

The Walking Dead has so much source material to work from that it has no need to stall, but this season has felt that way at times. I'm one who's willing to view the success as a whole and overlook some missteps if the overall season delivers, but whether this season succeeds or fails hinges on whether or not the finale delivers, and with an extended episode length there's no reason for the show to pull punches and make viewers wait to find out who Negan kills.

And dear God, if it's Glenn, after the events with the dumpster...

I'm convinced the show will lose viewers if they withhold the death until the fall, and the fact that ratings have dropped this season supports my belief that the audience - whether we're discussing viewers or readers - doesn't want to feel like it's being manipulated or played with. 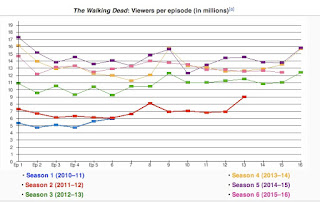 By comparison, The 100 has swung for the fences since season one. What can be more ballsy than a show where at the start, even the most minor crimes are punished by death? A teenager caught for any offense would be held until they turned 18 and then floated - released into space. 97 years after the earth was destroyed in a nuclear war, with the demise of the station as resources such as air were in short supply, a group of delinquent teenagers waiting for execution were the first sent to Earth to see if they could survive. And by the end of the first episode some of those kids are dead while another is speared through the chest as they face the horrible reality that they are not alone on the planet.

The group's leader has an impressive kill count. Number 303 shows Clarke killing her lover, Finn, out of necessity. And shocking as it was for Clarke to kill the residents of Mount Weather, these were the people who were capturing Grounders, draining their blood and killing them.


And the show never left people hanging until the next season for that payoff. They delivered in the season finale and still left you wondering for 6+ months whether Clarke would return to Arkadia and how Skaikru would get along with the the Grounders after their alliance had crumbled.

In the last two episodes of The 100 three long-term characters have died. Fans have revolted over the death of Fear The Walking Dead's Alycia Debnam-Carey's popular Lexa. However, Lexa is Clarke's second lover to die within 2.5 seasons and it's been a long time coming. As much as I liked her I knew that her loyalty to Clarke was a reason that her death was inevitable this season in order to change the dynamics between Skaikru and the Grounders. The truth is, with Pike's rise to power, Skaikru is on the verge of a civil war.

Two weeks ago we were left hanging as Kane was sentenced to death and the 100 returned with not one, but two significant deaths in one episode. And there weren't any punches pulled as a character fro season one who has been a fan favorite died to save his own people.

Death isn't always necessary but when a show has developed a history of death and character loss from season one shying away from significant losses later undermines the tone of the show. Suspense and uncertainty aren't the only ways to engage and retain an audience. I've discovered that I like a work to move at a steady pace instead of dragging out events. It's possible to have the end product be even more effective by landing the punch instead of pulling it for delayed effect.

Consider the criticism of movie series that have split their finales into two movies and how that's resulted in declining box office revenues and negative reviews. I finally watched Mockingjay part 2 and  I believe it weakened the series overall.


What it's taught me as a writer is to push the plot to deliver more instead of padding out a weak plot. A shorter, stronger series is always better than a prolonged series that thinned out the plot so much that the story dragged.

I'm still a Walking Dead fan, but I really hope they don't test the patience of fans to the point that the term walkers starts referring to people who've quit watching the show because it's treading water instead of delivering the kind of solid, intense story lines it's capable of.
Posted by Sandra Ruttan at 3:00 AM