Back in 1999, you couldn’t turn your radio on or read a music publication without encountering the Latin explosion. Between Ricky Martin’s hips and Jennifer Lopez’s derrière, it seemed like Latino culture was about to take over the nation with its sexy rhythms, pretty people, and danceable hits. Then the explosion fizzled and disappeared. Why? Well, for starters, because the music was a fabricated mess, nothing more than crappy pop with a few Latin touches sprinkled on top. Also, between the albums in English everyone started releasing, the yellowing of every singer’s hair, and the videos full of easy-to-swallow cultural references, the Latino part of the Latin explosion was nothing more than an homogenized product with no real voice and as devoid of authenticity as a Milli Vanilli record (Google that one, youngsters).
Now, something akin to that is happening in literature, except it looks, feels, and reads like the real deal. I’m talking about a Latin explosion in crime fiction that is finally giving folks from south of the border, the Caribbean, and those born in the US in multicultural homes the chance to let their true voices be heard, their language to be used in the construction of their discourse, and their realities to be exposed in new and very interesting ways. From famous authors like Don Winslow becoming experts in frontera drug mayhem and Latin crime fiction giants like Leonardo Padura and Paco Ignacio Taibo II being translated into English to top indie presses accepting more Latino/bilingual authors and a wave of new writers sticking up their middle fingers and writing about their experiences the way they want to, it looks like this Latin explosion is real, and that’s a good thing.
Ask anyone about the DNA of American crime/noir and you’ll quickly get a list that reads something like this: Raymond Chandler, Dashiell Hammett, Jim Thompson, Mickey Spillane, and James M. Cain. Those are authors you have to read in order to educate yourself. However, the country they wrote about has changed, and the voices telling the narratives of that nation are finally as diverse as the country itself. In the words of Claire Wells, who contributed a superb piece titled “Writing Black: Crime Fiction’s Other” to Diversity and Detective Fiction, edited by Kathleen Gregory Klein: “Crime fiction is a notoriously conservative genre and an examination of how the boundaries are breaking down in terms of racial positioning in this genre is perhaps representative of the wider postmodern slippage which is generally occurring in the field of literary production.” 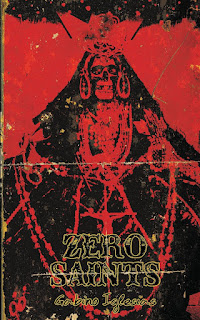 This postmodern slippage is gaining momentum, and that is only part of what’s making crime fiction crucial right now, perhaps more so than any other popular genre. You see, the way crime fiction works is like this: something bad happens and that something exposes a plethora of social and political problems. When I sat down to write Zero Saints, besides the experiences and memories I wanted to put into the book, I knew that there was something important that I had to keep in mind at all times: crime seldom happens in a vacuum. For the characters in this new Latin explosion, the gun, the kilo, the trick, and the murder are means to an end, a way to put food on the table, or a way to cope with the rejection that comes from being the Other/not being able to find a real job/not knowing the language. The narratives about guns and crimes are now being injected with looks at diversity, identity, positionality, (multi)cultural touches, and the experiences of those forced to live on the margins of society. Latinos are here to stay. Spanglish is here to stay. The Latin crime fiction explosion is only starting, and as a bunch of second generation Whatever Americans start looking for and writing themselves into the genre, it’s bound to grow.
I grew up surrounded by death. I grew up knowing that the wrong look got you a bullet. I grew up getting my teeth broken in street fights. Then I moved away from that and got a different version of hardship. I’ve been asked for my green card at job interviews. A great university hesitated about giving me a job because they didn’t know if I could give a 3-hour course and run a lab entirely in English. I’ve been on the verge of homelessness. These past six years have shown me that women will accelerate as soon as I step off the bus behind them. I wrote a piece about my relationship with guns while growing up in a hyperviolent country (you can read My Gun Education here) and realized that some states of mind just stick around forever. In short, my life in this country, especially when mixed with the one that preceded it, is not normative, except for someone who inhabits Otherness. That’s why barrio noir happened. That’s why I think of Zero Saints as the start of something special. That’s why I need to talk about the things I need to talk about. That’s why I escribo en Espanglish even knowing that some folks will criticize me for it. That’s why I’m really happy women, African American, and Latino authors are making so much noise now. This is one Latin explosion that won’t fade away, and you should keep your eyes on it.
Posted by Renee Asher Pickup at 3:00 AM