I haven't worried about writing from the other gender's perspective the same way some writer friends have. My main view is that people are people, whether male or female, black or white, and within each gender and ethnic group and any other categorization that can be applied to people there are individuals with a wide range of interests, attitudes and experiences that combine to make them who they are.

I don't think we're identified solely by our gender.

And I've never considered myself a staunch feminist. What concerns me about how the term is sometimes used is that people mean women are superior to men. I'd prefer to think of myself as a humanist. Everyone should be treated equally.

The real dilemma for writers is that people aren't all treated equally. I found myself thinking about this recently when I happened across an old CSI episode.

She couldn't do this anymore.

And I wondered why it was that it was okay to write a female character out that way. Does it diminish her as a woman if she didn't stand up to an attacker and a bad experience and defy it, and refuse to let what happened cause her to quit?

Apparently Finn (after my time of regularly watching the show) quit like Sara did - after events she couldn't overcome caused her to leave.

I found myself wondering about way female characters had been written out. Did quitting make them seem weak?

And if men don't have women to protect do they lose their sense of purpose? How much of a man's gender identity is connected to protecting his family?

I've been wondering about this a lot lately. Part of the reason is because of the number of conversations about The Walking Dead that I've had recently. As I've blogged about here already, the character of Carol has been going through quite an ordeal, and some fans feel it undermines the strength of her character.

Carol is a woman who endured abuse from her husband. She's survived losing him and losing her daughter and emerged as a force to be reckoned with, capable of doing whatever she needed to do to survive and help the group.

Even if that meant murder.

Now, Carol doesn't want to kill. She's consumed by guilt and doubt. Living in a state of relative safety in Alexandria can make people soft, and it also allows time for fear to subside. When fear has driven you do the unthinkable for a long time the absence of fear can lead to self reflection and guilt. When the fear is passed you'll ask yourself if you really had to kill someone who'd threatened you along the way.

I mean, the Terminus folks were about to turn Glenn, Daryl, Rick and others into burgers. Lizzie was about to kill L'il Ass-kicker, Baby Judith.

Can Carol really feel guilty about killing them to save her friends?


Yet it would be the ultimate human response, wouldn't it? I mean, if someone broke in here and attacked my family I'd like to think I'd do whatever I had to do to save them. I'd like to think I'd rip a man's throat wide open if it meant saving my husband or kids. Think of every cop drama you've ever watched during a post mortem. There's admiration when the evidence proves the victim put up a fight.

And yet I can also imagine that I would be consumed with doubt and guilt afterwards. I'd search my mind for some other way I could have achieved the intended outcome. I would question if I'd really had to do what I did.

Carol's suffering PTSD. It doesn't make her weak or feminine. It makes her human. 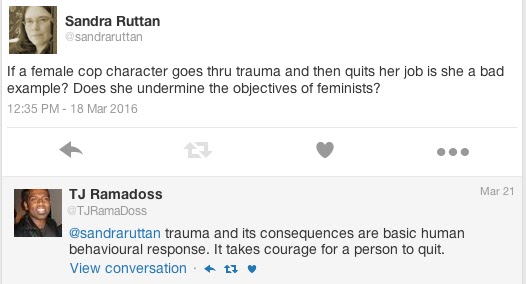 TJ is right. As I've been thinking about the way that the genders are portrayed in fiction I've realized that it's women who tend to be the ones who know when to walk away. They can see the damage that they're enduring from a situation that isn't healthy for them and choose to make a change. It's quitting to some and it's self preservation to others. Sometimes you need to be able to recognize a situation that's destructive and choose to altar the landscape, and sometimes the reason you're doing that is because you recognize that you deserve better than what you're currently experiencing.

That doesn't mean that men can't. There are stereotypes that still exist in our world and in our fiction. Men are determined and won't let go of a vendetta until they have resolution. Women are more likely to walk away.

If the stereotypes are to be believed.

In order to write past gender stereotypes you need to assess the motivations of your characters to ensure that their actions are based in character consistency and logic. In the end, everyone's an individual. And some stereotypes will be true about some people some of the time. The way to ensure that the character doesn't read like a cardboard cut-out of a stereotypical male or female is to understand the characters so that you know why they have their beliefs and act the way they do. Conveying that understanding to the reader will take them from a superficial character who simply acts like a lot of other men or women and make them a complex, compelling individual.

Looking for portrayals of great characters in fiction? Consider Happy Valley (Netflix) as the recommendation of the day and feel free to share your recommendations in the comments.
Posted by Sandra Ruttan at 3:00 AM

Very thoughtful piece even for someone who doesn't watch the shows mentioned because I can think of other examples. Love HAPPY VALLEY and I think the Kim Wexler character on BETTER CALL SAUL and Jessica Jones and even Kimmy Schmidt makes us see the strength of women under stress.

I'm really curious to see what happens with Kim and Jimmy and I think Happy Valley has one of the strongest female leads of any work of fiction. And that strength enables her to recognize her own complicated feelings towards her grandson and show compassion to people who'd committed horrible acts.