In Norway, the tradition of reading crime fiction over their longer-than-usual Easter break is so entrenched in the culture that if you search "Easter Crime" you get a page full of results discussing the phenomena. This is particularly interesting because when you search "Easter" and a specific crime, like say, murder or robbery, the page fills with local and international tales of complex heists, family disputes gone bad, and people knocking over ATMS.

What is it about Easter, our goriest of holidays, that leads us straight into the open arms of sin, rather than, you know... Jesus?

I'm not a psychologist or a sociologist, so rather than trying to answer that, I'm going to share a few of my favorite Easter true crime stories. Some of these are ripe for adaptation.

This year, in Chicago, clergy ask their city for an Easter without violence, as the city is plagued by violence and murder every day of the year. Do they know, I wonder, how Easter Sunday has been plagued by violence for what seems like eons? The first occurrence of "Easter Massacre" I found was in 1916. Also called "Easter Rising" and "Easter Rebellion", Easter week of 1916 marked a bloody insurrection in Ireland against English rule.

A bronze angel with a bullet in her chest still stands at the site of the insurrection, who's history seems to change significantly depending on who is doing the talking.

The other result for "Easter Massacre" has no such nuance. It's a tragedy that, in our current climate is all too imaginable, but still gut churning.

An early Easter, much like this year's, prompted the Ruppert family to come together for an Easter egg hunt at Grandma's. Jimmy Ruppert shared the home with his mother, and though the house full of children and happy laughter should have been a welcome celebration, instead, his brother said something that clicked with his mounting paranoia. "Uncle Jimmy" went back upstairs to his gun collection, then came down and calmly shot each member of his family multiple times.

So you're sitting in the car with your baby while your husband gets some cash out after a long, and hopefully happy, Easter Sunday - now a bunch of men with guns are coming at you, and they want the cash your spouse is getting from the ATM.

Not the best way to cap off the Easter holiday, but at least the four jack-offs were almost immediately apprehended, and no one was harmed.

Easter Sunday and armed robbery seem to go together like Peeps and hollow bunnies - gas station attendants left alone to sell candy and cigarettes to people who've had too much candy and not enough cigarettes seem to be the people most at risk for a gun in the face on Easter. It's not always a lone desperate man or a group of teenagers testing the limits of their newfound criminal mindset - no, there are love stories, too. 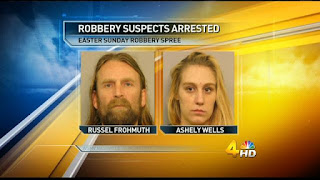 Russel Frohmuth and Ashley Wells are hardly Bonnie and Clyde. They didn't have the glamour, the guts, or the vision. What they did have was a box cutter and the lack of forethought to hold people up in public parking lots. In a crime spree not even fit for a Dateline episode, they held up three different people around town before being caught and having all their ill-gotten gains recovered from their mini-van.

You may be familiar with Hatton Garden if you're really into jewelry and have been to London a few times. It's the center of the UK jewel trade and home to a bank of safety deposit boxes rumored to hold billions of dollars worth of jewelry. With plans for the local stores and traders to be closed for Easter, just about everything in the district was locked up tight in the boxes, and the people of London set about their holiday.

There was just one problem - a gang of retirees, ripe for a crime movie, were ready to pull off "one last job." A fire was set just before the weekend, and authorities thought that was the end of their bad luck, but when everyone was gone, enjoying their time off, these men cut a hole in the wall and lowered themselves into the vault. Over a period of two days they cracked the safety deposit boxes and filtered the jewels out, until one of them accidentally tripped an alarm, cutting their heyday short.

The seven men, all senior citizens, made off with about 300 million dollars worth of diamonds and other jewelry, that was thought to be out of the country and on it's way to buyers before the heist was even discovered. 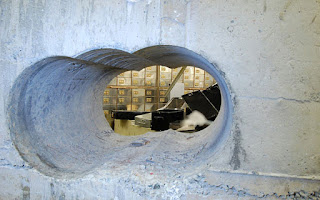 The men were eventually caught, but that was hardly the end of the story. The leader of the gang, known as "Guv'nor", facing jail time and the end of his nearly forty-year career as a professional thief, has a bone to pick about how the investigation of a previous robbery was handled. No, he isn't trying to get off on a technicality - he's horrified that the photos he and his gang left on the floor of the vault - photos that allegedly showed a high profile British politician sexually abusing children - were ignored. He claims the gang found them in one of the boxes and purposely left them for authorities to find, but nothing seems to have come of their attempts to reveal the horror.

It seems there is honor among thieves, and his speaking out has lead to an investigation, though the politician's name has not been released.

One thing all of these Easter crimes have in common, though, is that the perps all got caught. So this Easter, maybe focus on eating ham, not going HAM.