This is the little book I've been working on recently, LETTERS FROM A SERIAL KILLER: 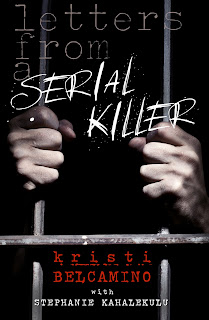 It's a novella-length book that is a combination true crime/memoir. It's up for pre-order now here. If you do happen to pre-order it, be sure to email me (kristibelcamino@gmail.com) a screen shot and I'll send you off some copies of the letters. Here's a bit about it:

"After termination ... there is a let down. Anytime you get an adrenaline rush like that, there's a let down. Hard enough where it puts you to sleep."

This is the story behind my Anthony and Macavity-award nominated book, Blessed are the Dead. Letters from a Serial Killer is a novella-length true crime/memoir about my life as a newspaper reporter in the San Francisco Bay Area covering the crime beat and my dealings with a serial killer and one little girl he kidnapped off the streets of Vallejo--Xiana Fairchild.

Warning: it contains some explicit excerpts from Curtis Dean Anderson's jailhouse letters to me and Stephanie Kahalekulu, the woman who raised Xiana.

More than a decade ago, I lugged a big box across the country that has become a dark memorial to a man I feared and despised. I've kept it in a far dark corner of my basement. It contains sick mementos of a monster--dozens of reporter's notebooks filled with interviews with this man, newspapers filled with articles I wrote about him, and documents, such as his birth certificate and jailhouse interview requests stamped "denied" or "approved."

Letters from a Serial Killer is my story about a seven-year-old girl snatched off the street on the way to school and never seen again. It is about how this story came into my world and still affects me to this day. But readers will also hear from Kahalekulu--the woman whose life was changed forever on Dec. 9, 1999. In this book, we share details of our jailhouse conversations with this man and the letters he sent us from behind bars and how we are forever bonded by our dealings with a monster, but more than that--by our quest for justice for Xiana.