A big thanks to Scott Adlerberg for offering the space here this week. Since Scott’s a true New Yorker, I can think of no better place for a tribute to the late, great author Tom Philbin. 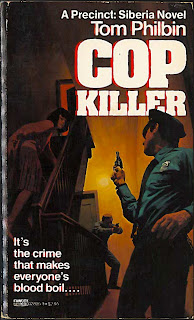 While browsing a dust ridden used book store many years ago, I picked up a paperback solely because of its cover; a NYC cop climbing the staircase of a  brownstone, a desperate woman in the shadows looking back, and a mysterious killer about to blow the cop away. This was the 1986 Fawcett Gold Medal/Ballantine mass market paperback Cop Killer, the third in Tom Philbin’s Precinct: Siberia series, and a true discovery. I relished the pulpy prose and dark humor. I was hooked and would go on to read and collect the entire nine book series. 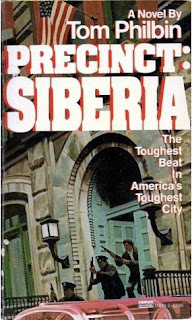 In the first chapter of Precinct: Siberia Tom sets the scene:
It was places, precincts like the Five Three, that cops dreaded being sent to. Actually, you weren’t sent; you were sentenced, and at any given time there was always a Fort Siberia. In the fifties and sixties there was Fort Apache. Before that there was Staten Island; there was a precinct in Harlem, one in Bed Stuy. It was punishment duty, except for cops who had the misfortune to be assigned there after the Academy. It was for misfits.
Alcoholics who couldn’t be helped, homos, psychotics, grass-eaters, drug users. Malcontents, thieves who couldn’t be nailed, wheeler-dealers, cops who messed with the wrong people, and old cops who should retire but who wouldn’t and, like old Indians, were put out on the plain to die.
Having lived in NYC for a half a decade, Tom’s fiction felt so real to me, his characters and locations so vividly portrayed. I had worked part time for the New York City Department of Transportation making training films while a student at Columbia University. The NYC DOT had its own dumping ground, a drab building way out on Queens Plaza in Long Island City. I’d learn because of the labor unions it was nearly impossible to fire a city employee as long as they showed up for work. The solution was to send the square pegs to the Department of Transportation’s own “Siberia.”
There was always a strong sense of justice in Tom’s narratives, with underdogs finding a way, and that made them satisfying. In Leroy Lad Panel’s exceptional reference book, The American Police Novel: A History, he describes Philbin’s characters as:
“The point Philbin makes, however, does not concentrate on the corruption in the precinct, but on the way in which leadership and an awakening sense of duty transform losers into cops. He created a cast of misfits and losers: Grady is a burned-out drunk, Getz is a pea-brained muscleman, Piccolo is a violent hothead, and Edmunton “had been assigned there for grass-easting – petty thievery that couldn’t be proved" (Undercover).  Not a loser or a misfit, but the victim of departmental injustice, there is also detective Barbara Babalino. All of them profit, grow, and mature because of the leadership of Detective First Grade Joe Lawless. About Lawless Philbin does not mince works: “Of all the human beings who had crossed his path in forty-two years of living, Joe Lawless was probably the best. The stuff, really, on which heroes are made” (Cop Killer).
I felt Tom’s series would make great television (even though I didn’t necessarily have the means to get a TV series off the ground), so I found Tom through the Author’s Guild. Unfortunately Precinct: Siberia was already optioned, but over the years we remained in contact and grew to become friends. On a trip to New York, Tom drove me around the battered Bronx neighborhoods that inspired his novels, where he’d grown up. We even dropped in on the Edgar Allan Poe Cottage in the Bronx where Poe spent the last years of his life and penned The Cask of Amontillado.
Tom was the son and grandson of police officers. He’d served the U.S. as a  paratrooper, and worked as a painter and contractor, then started writing about what he knew with books such as How to Hire a Home Contractor Without Getting Chiseled. In 1981 Tom made his fiction debut with the thriller Yearbook Killer, a Fawcett mass market paperback. A few years later Precinct: Siberia would be published. Eight more would follow.
A Matter of Degree sticks out from the pack. It’s the one novel that does not parallel three cases but rather concentrates on the singular hunt for a serial killer by hypochondriac Detective George Benton, or as other cops call him, “The Bent One. 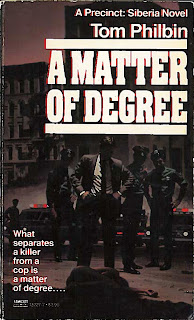 By the 90s the series ended when Fawcett’s mass market pulp paperbacks all but faded away. The producers that had optioned Precinct: Siberia had a pilot script written. Fox was looking for a police series. Precinct: Siberia was one of the projects considered, but the studio instead chose Stephen J. Cannell’s The Commish starring Michael Chiklis.
Tom would go on to write Copspeak: The Lingo of Law Enforcement and Crime, serial killer nonfiction, horse racing books such as Barbaro and the stunning Churchill Downs commissioned Two Minutes to Glory: The Official History of the Kentucky Derby plus a variety of others. He published over 40 books.
Tom encouraged me to write fiction and served as a mentor. I’d fax pages and we’d swap notes. I found early success when my short stories were published, and in the acknowledgements of my novella The Shill I give tribute to the “late, great pulp paperback author extraordinaire Tom Philbin.”
If you’re a fan of gritty cop novels, sample one in the Precinct: Siberia series, available on Ebay, Amazon, or quite possibly in the mystery section of your favorite used book store. Everyone I’ve ever referred the series to says the same thing; “Hey, these things are really good.”
(John Shepphird is a Shamus Award winning author and writer/director of TV movies. Look for The Shill and Kill the Shill from Down & Out Books). 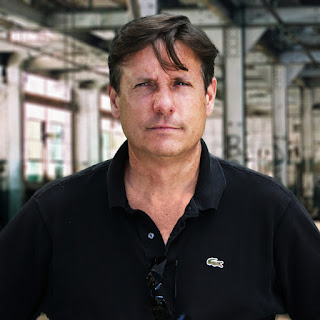 Actually the books should be available as ebooks shortly