Holly's note: As soon as I read this piece I couldn't wait to read CROSSWISE, S.W. Lauden's new novella, especially since I read his debut, BAD CITIZEN CORPORATION, and loved it. Really, the mention of any kind of pie is enough for me.

But I'll let Steve tell you why he's so drawn to Florida...


“We accept the reality of the world with which we're presented.
It's as simple as that.” —The Truman Show

I was a guest on Tom Pitts’ excellent “Skid Row Chatter” podcast recently when he asked me why I followed up my Los Angeles-based debut mystery novel, BAD CITIZEN CORPORATION, with a standalone novella set in Florida. 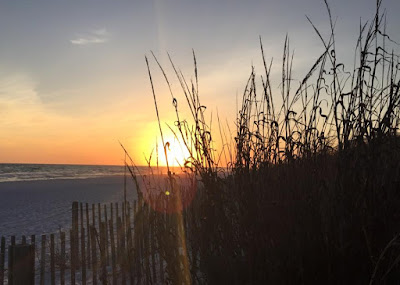 It was a fair question, but one I was dreading—mostly because I hadn’t worked out an acceptable answer yet. I skirted the question that night, but I’ll try to address it right here.

The simple answer is that I have fallen for the Florida Panhandle, specifically the stunning stretch of coast along the Gulf of Mexico known alternately as “The Emerald Coast,” “Lower Alabama” and “The Redneck Riviera.” There are lots of colorful nicknames for the place, some more flattering than others, but none quite do justice to the white sand beaches and blue-green water.

I discovered the area when a friend invited my brood to stay at his family’s beach house in the planned community/resort town of Seaside. We’ve been back every year since, as much for the chicken biscuits and key lime pie as the beautiful sunsets and laid back vibe.

It didn’t take me long to figure out that it’s the perfect place to set a murder. So I sat down to write a short story while we were there. That piece, CROSSWISE, eventually evolved into the novella that will be published by Down & Out Books on Feb. 29.

The idea for CROSSWISE was based as much on the tranquil setting as it was on all of the clichés about Florida—new and old, stunning and boring—that you encounter in the media these days. It felt like I had been promised a lot of Sunshine State weirdness, but was a little disappointed when all I experienced were friendly people, brightly colored beach houses, and perfect weather.

So I did what crime writers do, I created the darkness myself. Or, to be more specific, I amplified the oppressive charm of the place and populated it with a cast of shady characters including a disgraced NYPD cop, his drug-addict girlfriend, bumbling local law enforcement, and several surly retired New Yorkers. It was a bit like taking a beautiful postcard and defacing it with a Sharpie before mailing it to your best friend. Wish you were here!

There is just something about Florida that makes it the perfect setting for Noir. As if the constant sunshine should leave the cockroaches no alternative but to do their dirty work in the light of day.

Many others have realized this before me, of course, including literary luminaries like John D. MacDonald, Carl Hiaasen and Elmore Leonard—to name just a few. And Hollywood has gotten in on the action for decades with films like Key Largo, Cool Hand Luke, Body Heat and Scarface.

Seaside itself was the location for the 1998 Jim Carey sci-fi comedy film, The Truman Show. I remember being overcome with an eerie feeling of familiarity as I roamed those winding streets for the first time. That spooky sensation lasted for a couple of days before my friend informed me that I was basically walking around a movie set.

That’s a unique surprise for somebody who grew up in LA where we’re used to seeing our hometown on TV and in the movies. But that strange feeling was only enhanced when I realized that the idyllic beachfront community where we were staying truly was an anomaly on the Panhandle.

You only have to get a few miles out of town (and your manicured vacation bubble) to see the stark contrast the region presents, one that is—at least to a crime writer’s eye—closer to the exaggerated Florida of film and literature. On the outskirts of town where the ferocious flora and fauna conceals all the scary possibilities that makes writing fiction so much fun.

So why did I set CROSSWISE in Florida? It has to do with all of the delicious juxtapositions and contradictions that the place presents. The movie set vs. the reality. The media clichés vs. the actual culture. The locals vs. the tourists. And did I mention the key lime pie?

It’s Florida, man. And I can’t wait to go back for some readings and signings in late March. I hope you’ll come along.

S.W. Lauden’s debut novel, BAD CITIZEN CORPORATION, is available now from Rare Bird Books. The second Greg Salem novel, GRIZZLY SEASON, will be published in September 2016. His standalone novella, CROSSWISE, is available now for pre-order from Down & Out Books.

I spent some time in and around Pensacola and Fort Walton Beach for a previous employer. Always enjoyed my trips trips there. It's a perfect setting for crime fiction, given the juxtaposition of elements, mostly the range of people who live and pass through.

Looking forward to it.

Thanks for having me back again, Holly!

Enjoyed Crosswise, Steve. And it definitely had a very strong sense of place. That came through really well.