New Year's Eve is approaching, and that reminds me of how I used to go out for the occasion.  I'd go to a party if a friend was having one, or more often, back in the regular bar hanging days, I'd head to my local watering hole to carouse with fellow regulars.  Nowadays, as December 31st moves along and midnight approaches, I spend the night home with my wife and kid. Champagne is on hand, but the festivities involve nothing more than relaxing in my pajamas watching movies.  I like something light to watch as the year ends, something that won't tax my brain or weigh on me heavily, and the ideal is a film with lots of alcohol in it, but with the drinking pictured as fun, not destructive.  Barfly might pass muster.  Mickey Rourke as Henry Chinaski drinks without guilt and frequently has a good time in his scruffy element ("Drinks for all my friends!"), but in the context of New Year's Eve, the film will probably just remind you of all the lonely alcoholics out there ringing in the New Year over shots and cheap beer in dive bars.  The Lost Weekend, Leaving Las Vegas, even the great Withnail and I - no, these films don't work on this night either.  Anyway, none of them has to do with New Year's Eve.

There are so many films set around Christmas and Thanksgiving, but what about films set on the last night of the year?  Well, there are a bunch actually, from disaster films like The Poseidon Adventure  to risible romantic comedies like New Year's Eve  to so-so comedy-dramas like 200 Cigarettes.

Kathryn Bigelow's Strange Days, made in 1995, takes place over the course of the last two days of 1999, and it is a gripping, sci-fi thriller, perfect for the night if you like your New Year's Eve viewing dark.  Not much alcohol figures in this one, but there are drugs aplenty and futuristic mind-altering devices.  Like all
Bigelow's films, it is ferocious and kinetic. It stands up well to multiple viewings.  And its ending, such tension and violence among a few people in the midst of a crowd celebrating a new millenium, is one I've always really liked. Ralph Fiennes, Angela Bassett, Juliette Lewis, Tom Sizemore - great job by them and everybody else concerned.

Not bad is the 2005 remake of Assault on Precinct 13.  It's not the John Carpenter version, but French director Jean-Francois Richet makes a solid film about an understaffed police precinct under attack from a band of criminals on New Year's Eve. 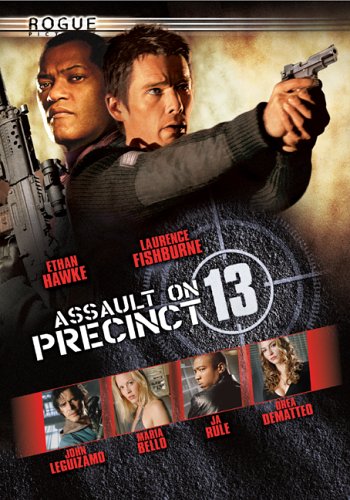 It's surprising how good the cast assembled for this one is: Lawrence Fishburne, Gabriel Byrne, Ethan Hawke, Maria Bello, Drea De Matteo, to name a few.  Partying doesn't figure here, just drinking done by tired cops, but you could do worse than this movie if you want some action film fun.

Another possibility: Ocean's Eleven, the original starring Frank Sinatra and Dean Martin, from 1960.  In this Rat Pack version of the story, the team's heist is done on five Las Vegas casinos at once, on New Year's Eve.  It's a lark of a caper film, with Sammy Davis Jr, Joey Bishop, Peter Lawford and Angie Dickinson engaging in endless banter.  It's obvious that the actors are enjoying themselves; in fact, I think it was Martin Scorsese who said that the film was shot as much as anything as an excuse for Sinatra and his pals to hang out together and make a film in their favorite place in the world.  The parts of the movie that occur at the Sands, Flamingo, Riviera, Desert Inn, and Sahara Hotels were all shot on location.  Is there drinking in the movie?  People enjoying themselves drinking? Do these questions, with this cast of characters, even need to be asked? Ocean's Eleven is no cinematic masterpiece (the 2001 version is better), but for me it does the job as late night New Year's Eve entertainment.

And finally, it goes without saying, After the Thin Man (1936), the sequel to 1934's The Thin Man, adapted from Dashiell Hammett's novel.  Hammett wrote the follow up film's story using his characters of Nick and Nora Charles, and like the first film, After the Thin Man crackles with rapid-fire repartee.  We're in fogbound San Francisco on New Year's Eve when a murder takes place, and Nick and Nora investigate over the course of the night. There are twists and turns galore, and the killer turns out to be the least likely suspect. It's a convoluted, light as air mystery, and William Powell and Myrna Loy play the most witty, loving, carefree, sophisticated, fun-loving, martini-swilling married couple in movie history.  Did I mention martinis?  I believe I did.  Let me say it again.  Martinis.  The amount Nick and Nora Charles drink in the film could fill a bath tub, but, hey, it all adds to the fun and the alcohol never impairs their sleuthing sensibilities.  We're talking pleasure with no downside, indulgence without consequence, wit and mental sharpness that never go dull. I'm not going to argue with any of that.  After the Thin Man is my favorite New Year's Eve movie for sheer enjoyment, and almost certainly the one I'll be watching again after midnight this year.

Posted by scott adlerberg at 3:00 AM 4 comments: