Get through the haze

For the second time in two months I am sick-as-a-dog sick. Scrolling through my Facebook today, I was reminded that just one month ago I was so sick I lost my voice, and here we are again. Between upper respiratory Hell, I had one of the longest and most unforgiving bouts of insomnia I've ever dealt with. My desire is to hire someone to keep passing hot toddies under my fuzziest blanket while I sleep for a couple months, but it turns out I can't afford it.

Money aside, what do writers do? We write. If we keep making excuses not to, we turn into those annoying people who post silly memes about "what it is like" to be a writer even though they never publish anything, anywhere.

The problem with writing versus filing papers or marathoning Netflix is that it requires some semblance of concentration. If you can't think straight, you can't write. So what do we do when there's a genuine issue keeping our brains mushy? 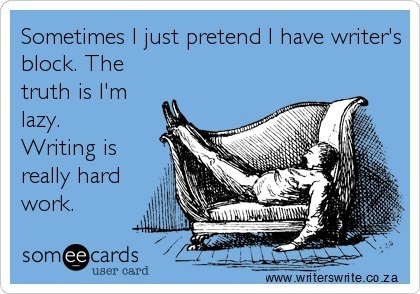 If you want to write, or you need to because you have made some kind of commitment, writer's block isn't an option. So what do you do?

1. Get some fucking sleep.

I know it sounds obvious but I always have a big crash after a large project and I almost always get sick. Stressing the body out for days or weeks at a time and not expecting to end up hacking something up is a fatal error. Once you deprive your body of sleep for an extended period of time, you'll get trapped in a vicious insomnia cycle, and you'll only compound the problem.

Do whatever you need to do to get some sleep. Long soak in a hot bath, a nightcap, a sleeping pill, reading transcripts from C-SPAN - just do it. If your work schedule or other responsibilities keeps you from sleeping in, do yourself a favor and go to bed at your first yawn for a few nights in a row. Just get some fucking sleep. You aren't going to write a masterpiece while dozing off on your computer and drooling on the spacebar.

No really. Get your ass outside into the sunshine, or at least the cool night air. Breathe in some air that hasn't been recirculated. Even if you feel like death itself, a change of scenery and some good old fashioned fresh air can work miracles. If the thing keeping you from focusing isn't physical, get some exercise. Even if it's just a quick walk around the block, you'll get the creak in your knees to loosen up and feel a refreshed. Exercising the body works wonders for waking the brain up. Plus, if you're outside it's harder to post stupid writer memes.

3. Find a nonjudgemental person and complain

Whatever it is fogging your brain - personal issues, hacking up a lung, a kid that won't sleep through the night - find someone who is willing to listen to you whine about it, and whine. People may tell you that complaining doesn't change anything, but once you've word vomited it out to a trusted friend, it becomes easier to focus on other things. Being mentally, physically, or emotionally exhausted is a heavy burden to carry, and most of us take a certain amount of pride in carrying it alone - but if you're ill or you have to put the family pet down, those issues take up space in your brain and keep you from setting your laser focus on the task at hand.

4. Sit the fuck down

My number one piece of advice for hitting a deadline or getting a jump start on a personal project? Sit the fuck down and just do it. Maybe the first five times you write the first paragraph it's the worst thing you've ever written - fine. Who cares? Because once you sit down and tell yourself not writing is not an option, you'll start lighting up the areas of the brain that make the writing happen, and telling the parts of the brain that would rather you watch Parks & Rec on Netflix for the fourth time to shut up.

You know how I know this works?

I didn't have an idea what I would write for this week's blog two hours ago. I went a little off course of my own advice and did my complaining here at the start, rather than complaining to a live human - but I've done both in the past and one works as well as the other if you can work in the other three.
Posted by Renee Asher Pickup at 3:00 AM