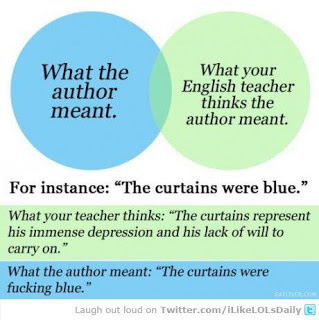 Essentially, I argued that if you ever found yourself in that situation, you should read better books. If you're reading books in which the author only meant to tell you the color of a thing, well, that's on you. The world is full of books by brilliant authors who can layer meaning and, I argued, you should read those instead of bitch about the shitty books you're reading now. Or, I guess, you could do both. Or neither. I'm not your real mom.

And yet that dumb thing has come back around, probably because Facebook is doing the "Hey, remember last year when you posted this picture? Wasn't that fun?"

So let's consider it this time, not from the reader's point of view, but from the writer's.

Sure, you could mean that the curtains were blue. That's fine. But let's work through how an intelligent writer might handle those curtains.

You could get particular about color, if you wanted. I grew up with the box of eight crayons, but I'm told some kids had boxes with more. Orange-red and red-orange. Something called "taupe." You could say the curtains were "light blue" or "sky blue." That's the sort of thing a writer might do when someone marks "needs more detail" in the margins. See, it seems like more detail, but it's not. It's dumb. Who gives a shit? Light blue. Dark blue. So what? Please stop writing stories.

If you're a writer with any skill. you'll want the curtains -- and much of the, ahem, fabric of the story -- to do more than just sit there. Lousy writers put detail where it isn't needed, where it merely slows the flow of the story and confuses the reader. Don't do that. What, you want an example? Fine. How's this?


He sat down on the couch, which was about six-feet long and had been bought at an outlet mall near Cleveland.

Again, who cares? Does the length of the couch, the mall, or Cleveland have anything to do with the rest of the story? Is Cleveland some sort of clue? No? Then shut up about friggin' Cleveland.

An origin story for a couch? No. Well, unless, OK. Let's try it again, this time with those damn curtains, again.


He slid open the curtains, their bright blue contrasting harshly against the deep blue of the walls, a color choice he'd argued against, but, what hadn't he and Margaret argued about in the snow-deep months last year.

Here, the origin matters. Margaret and the dude here got kinda fighty. Neat. Now we have more of the story coming out, thanks to the curtains. Of course, having an adverb in there -- "harshly" -- kinda kills it for me, but whatevs. You can work on that.

If you're giving details, you have to keep in mind that the details have to tell you something about the character or the setting. Or they have to move along the story. I mean, they have to do something. Gracious, any damn thing is a start.

Are they mis-matched curtains? Fine. Is that because she doesn't care about how things look or because she doesn't have the money to buy an $80 set at Curtains-R-Us? Or is it because she had a matching set, but she and Blaine had to split everything in the divorce, even the curtain? Come on, you're a writer. You can do better than having blue curtains, right?

Back in 2011, I said that if you read a book with the line "The curtains were blue," then you have lousy taste in books.

Four years later, I'd just like to say that, have all the blue curtains in your story you want. If you think a funny meme will make you a better writer, then you're probably setting the bar too low. You can do better than making internet memes proud of you.

You want to write about curtains? Rock on. Keep the curtains closed if your character is scared. Have her panic at the crease of light along the edges. Or tell me why a successful corporate vice president has Snoopy curtains in her office. Or why the guy hosting the party in your neighborhood has blinds on some windows and curtains on others. Is he a sociopath who hosts parties? Weird. Tell me more.

Have all the blue curtains, brown couches, and white towels you want. But, for Salter's sake, have them do something.
Posted by Steve Weddle at 8:16 AM

Having secured my degree in English, I still to this day find it hilarious when folks tell me I read too much into something that is a novel. There is a reason some books are classics and there is a reason those classic books mean different things to different people.

Some books are meant to be read - say on the beach with a beer - while others are meant to be experienced. One is not necessary better than the other, but only one of them will have the power to change you as a person. Those are the books that *I* want to read.

Thanks for this. Every time I see that meme I wonder, "Well, if it doesn't matter why the curtains are blue, why'd you bring it up? Why did you choose to mention the curtains but not the carpet?"

Why would it ever be okay for the writer not to be in control of what gets written? It's like getting into a car with someone and asking what the pedals are for and them saying, "They're just pedals, it doesn't matter."

Kristopher,
Yeah, the author and reader each bringing something seems to me to be the mark of a good book, where both sides are invested and contribute.

John,
Good to think of it in terms of control, yeah, and an author knowing what he/she is doing.

Oddly enough, there are curtains mentioned twice in my latest book. Now I have to go back and make sure I layered them with enough meaning.