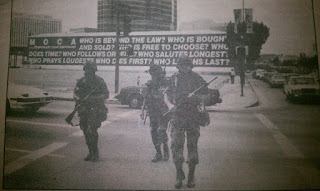 
This is a VERY long story about why I didn't flinch when I was told by my newspaper to  cover the Black Lives Matter protests in Minneapolis despite Molotov cocktails being found near my car and five people getting shot.

I've seen all this before on a scale that is nearly unfathomable to me now. If you have a few minutes to spare, here is the story. The above photo was taken by a man named Gary Leonard in my neighborhood in 1992.


It was April 29, 1992. That day I threw on my Alice-in-Wonderland print dress and laced up my Doc Marten boots. I stepped into the hallway of The American Hotel — where very few people had televisions and Internet access was many years in the future — and was told this:

"You're lucky you're moving to Seattle next month because as soon as this verdict comes down, all hell is going to break loose in this city."

I  lived in a residential hotel in downtown Los Angeles that was above an infamous punk rock bar, Al's Bar, where Jane's Addiction had played in the day and where Charles Bukowski's widow held his wake.

I was on the fourth floor and at night, sleeping on my black futon spread on the floor, I could tell whether the band was any good or not based on the vibrations coming up through my floor.

For some reason, I don't remember which one of my neighbors  at the residential hotel told me this that fateful day, but his words are seared into my memory. I paused outside my door and then, almost without thinking, as a primal, self-preservation instinct, I walked back in and changed into jeans and a T-shirt, grabbing my jacket that had a huge picture of Robert Smith from The Cure on the back. The future was uncertain and I felt too vulnerable to step onto city streets wearing a dress that day.

We were awaiting the Rodney King verdict. Little did I know that I would be wearing those same clothes for the next three days.

About a half hour later, I was on the 710 freeway that snakes from Los Angeles to Long Beach — where my boyfriend was waiting for me. The 710 freeway travels right over South Central L.A. In fact, it swoops very near Florence and Normandie.

As I drove to Long Beach I listened to the radio news announcing the Rodney King verdict and it's aftermath. First, reports of what was happening at Florence and Normandie near where I was driving: a man later identified as Reginald Denny was yanked out of his truck and beaten. A helicopter hovering above captured the beating on camera for the world to see as it ignited rioters across Southern California. The news reports said rioters were attacking drivers, reporters, anyone who wandered into their path.

In Long Beach, the entire town was in an uproar talking about the violence and chaos just north of us. Everyone was in a state of shock and disbelief. It suddenly felt like we had been thrust into a third-world country.I don't remember much about those first hours.

Everything was overshadowed by the riots. People were gathered in front of radios and TVs everywhere. We stood around and watched what was happening. On street corners. In restaurants. In coffee shops. At the bars. The beaches were deserted. Nothing else existed except the riots. Oddly, I remember that there wasn't a lot of conversation about it at the time. People were too stunned. Most of us stood there, stricken into silence, watching the news reports.

Later, tired, and ready to go home, I was on the freeway again, this time toward my home in downtown L.A. I was about to exit onto the 101 freeway, but what I heard on the radio made me change my plans: Rioters had swarmed onto the 101 freeway and were setting fire to cars and palm trees.

I somehow managed to get back on the freeway and, unsure where to go, since I couldn't go home, headed back to Long Beach.

Meanwhile, as I later learned, back at The American Hotel, my neighbors had taken to the rooftops with their guns, vowing to protect our building, as piss-filled and worn-down as it was.The guns were a bit of a surprise to me.

One neighbor, a former cover girl model now down and out, who like me worked as a waitress at the Mexican cantina a few blocks away on the border of East L.A., stood on the roof with an Uzi.

Two days later, when I returned to L.A. my neighborhood had been turned into a war zone. Parking lots that usually were full with commuter's cars had been turned into armed camps, with camouflage nets strung across the tops. An empty dirt lot near The American Hotel now had trenches dug in it and was patrolled by National Guard members in full body armor. Old hangouts were burned to the ground. Tank-like vehicles rumbled down my street.

We stayed up until dawn, until we could no longer keep our eyes open anymore. We stayed up watching footage of L.A. burning, of rioters looting and carting shopping carts full of merchandise, of bricks hitting people's heads. My neighbor was right. All hell had broken loose in my city.

The next day, blurry-eyed, I hung out in coffee shops all day long. I remember calling in to the Mexican cantina and being scolded by my boss for not coming to work that day. I told him that there was no way in hell I was going to go to work at the Mexican cantina that was a notorious hangout for both East L.A. gangbangers AND off-duty LAPD. Screw that. It would be fire-bombed, I was sure.

I was sitting at one coffee shop, the last in a long series I had visited that day, when the Long Beach cops came in and shut the place down. They said they were closing all businesses on that street because "The rioters" (they had taken on a life and entity of their own) were a mile up the road burning the mall.

"The Rioters" — an unidentifiable group of people — had become a solid mass that struck fear in people. What I hated, what I loathed with every fiber of my being, was this sudden acute awareness of race and skin color that faced me at every turn. I hated thinking that the color of my skin was defining me in that moment and defining others, as well.

It was shameful to realize that the world had suddenly turned into "us" and "them" overnight. It scared me to think that the L.A. population was being viewed in terms of black and white.

Literally. To me, that was more frightening than rioters burning palm trees and cars. I knew I wasn't the only one who felt this way. I knew that people black and white, felt exactly the same way as I did.

With nowhere to go, my wandering eventually led me to a bench on some cliffs overlooking the Pacific Ocean. I sat there with my head in my hands for what seemed like hours, but was probably only minutes.

Then, I noticed somebody had sat down beside me. I looked up. It was a black guy about my age. He sat in a similar position, holding his head.

When I saw his similar pose, I chortled a sort of delirious, sleep-deprived laugh. He looked up at me and laughed, too. We both were in hell and we knew it.

We spent the rest of the afternoon together. We tried to figure out what had gone wrong in the world, how we had grown up in the middle of it all, and what we could do to stop something like this from ever happening in the future. (Remember we were idealistic college kids!)

We especially talked about "them" — the rioters. Because they were not us.

The ones who were trying to seek justice by destroying a city and killing people were not us. We didn't know how to solve such a deep societal problem, but we knew violence wasn't the answer.

And so, no, I didn't flinch for a second covering the peaceful Black Lives Matter protest in Minneapolis. They were angry and there was shouting, but the only violence the first two weeks of protests saw came from an outside group - a radical white supremacist group that decided Molotov cocktails and shooting people was an answer to whatever frustration they were having - or whatever hatred they needed to spew.

The protesters remained angry, but peaceful.

People out that Friday night included families with children, ministers from different denominations across the Twin Cities, and people who had grown up on the North side and seen and had an experience with police I've never had.

So, no I didn't flinch when I was told to go to the protests and see what was going on.

When I arrived, I headed straight to the fire pit with the toughest, baddest looking guys gathered around it.

And you know what happened? They offered me a slice of pizza and scooted over so I could warm myself at their fire.

When it was time to go back to the newsroom, I found a man with a flashlight checking under cars in a dark parking lot. When I showed up, he was ducking down peering under my minivan. He told me they'd received numerous threats from white supremacist group's promising to disrupt the protests that night. In fact, they found several Molotov cocktails near my car. He was checking to make sure there weren't any more.

"It's really freaking us out," he said.

His name was Michael and he was one of the organizers from Black Lives Matter. I gave him a hug and thanked him for being out on this cold night taking the time to look under my vehicle and others for something that could hurt us. By the time I got back to the newsroom, the Minneapolis police had posted this photo: 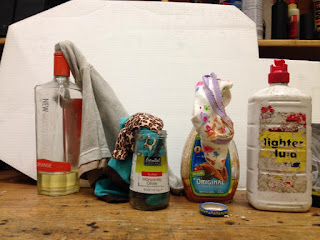 And a few days later, several white guys in masks showed up at the protest and opened fire. Five people were shot with non-life threatening injuries. Four men have been arrested in connection with the shooting.

Yes! I have it burned into my memory, blanked out there. Will fix when I'm not at work. thanks! kristi