To the Friend Who Asked Me a Question

Some writers are born with the innate sense to get started writing. Others have to be kick started. I'm in the latter group. This week, I lost the friend that helped me write my first book.

A decade ago this past summer, a co-worker of mine, a fellow technical writer, Doug Warren, asked a simple question of me. "Would you read chapters of the novel I'm working on?" I replied without hesitation: "Sure." Then, without thinking, added, "If you read mine."

Doug had chapters written. I had nothing written.

We writers who are born with that innate sense that makes us want to tell stories all want to write novels. But the task can seem so daunting. How do you do it? What's the process? How will I ever finish something that will be the longest thing I've written?

Big questions, indeed. Ten years ago, the proliferation of how-to-write resources wasn't the big business it is now. Doug and I didn't quite know what to do. He had a basic outline and wrote to it. I fell back on the training I had received writing my Masters' thesis: write an outline, arrange the scenes, and go.

Doug and I quickly established a pattern. Each Wednesday, we'd eat lunch together, usually at the campus of the client for whom we worked. After the first week, we'd each come with two different documents. One was the fresh chapter of our own books. The other was the marked up print-out for the other guy's previous week's chapter. We'd take turns going over the chapter, asking questions, and clarifying any comments.

The experience was invaluable. And it was damn fun. It quickly became a thing that you didn't want to be the guy who arrived at lunch without new content. That sense of responsibility really spurred each of us.

Doug was an awesome writing companion. He'd give helpful comments and, more importantly, ask pointed questions. I specifically remember a question he asked when I was well past the halfway point of my book: "Hey, what are your bad guys doing?" Aha! Good question, my friend. I proceeded to tell him all that they were doing to explain their actions in the chapters I had already given him. After I finished, he said, "Yeah, all that. Put that in your book."

So I put those scenes in the book.

Doug finished his book first, but we kept our lunch dates each week. He still spent the time to read and edit my chapters until I, too, finished.

Writing is a solitary journey, but it sure is easier when you have a companion who can travel with you. Most importantly, I think it's important to have a companion to travel with you on that first journey. I've completed other novels since 2005-2006, but none were as special as that first time. I am so glad that it was Doug with me on that initial journey that proved to each of us that we had what it took to write and complete a novel.

A week ago today, Doug passed away. He was only a year older that I am. When you're in your forties and that happens, it'll get under your skin. It has for me. His funeral service and eulogy was warm with the love of family and friends. I got up and told this story to the folks there who maybe didn't know the special place in my life that Doug held. They do now. And now all y'all do, too.

Before I conclude here today, let me state the obvious: always tell those you love that you love them. Do it today. Do it everyday. Do it in words and deeds.

As a corollary to that, let me encourage you writers (and all artists) to contact the person who may have sparked your flame of creativity and thank them for being there at the beginning. Doug and I both knew we were special to each other when it came to writing that first novel.

Finally, there's the thing that slammed into my head in the moments after I heard the tragic news last Saturday: when I publish that first book, the dedication will be for my friend and fellow writer, Doug Warren. I can think of no better tribute to the guy who was there to kick start my writing career. 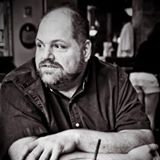 Thank you for sharing your experience with Doug. Awesome reminder to always be grateful to those that helped us to get started!!
Tim! O'Boyle

That's as good a tribute to Doug as I can imagine. He'll be in everything you write in some way.

I was in a workshop once that functioned much as you and Doug worked, though there were 14 members. Two brought samples each week, and we all provided comments a week later. It could have been hell, but we had a good group, and John McNally was a perfect leader. I've learned a lot since then--often based on things I learned there--but would not have written anything others would want to read had it not been for that experience.