Diving off the Deep End

Wowza. There's lots going on here at Do Some Damage at the moment. Jay's skipping out on us for awhile because he'll be writing full time soon and we've added a couple of kick ass contributors on Tuesday and Friday. Here's my big hearty welcome to Scott Adlerberg and Renee Pickup. I look forward to reading your posts.

But this is Wednesday and that means it's ALL ABOUT ME. And it just so happens that as of today, I've finished a new manuscript. This is where I'd post the picture of the stack of printed pages, but since I'll be sending this draft directly to my editor without printing, you'll have to settle for this screen shot: 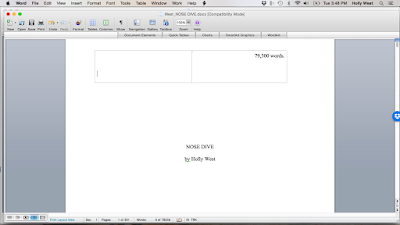 It's difficult to see here (for some reason I can't get Photoshop to open so I can crop it) but the working title is NOSE DIVE and in its current state, clocks in at about 79,000 words.

It's been nearly two years since I finished a full-length novel and nearly three since I started this particular book. It was a NaNoWriMo project in 2012, but half-way through the month I got the phone call from Carina Press saying they wanted to publish the book that eventually became MISTRESS OF FORTUNE. This one got dropped by the wayside.

NOSE DIVE is a welcome departure for me. I love my two historical mysteries, but I'm ready to make the jump into contemporary crime novels. It's set in August 2015 in Venice Beach, California, a neighborhood I lived in for four years and miss terribly. I won't call this book an homage to Venice, but I did try to bring the location to life the same way I did with 17th century London in the Mistress books.

It features a disillusioned bartender named Mia Bartlett who works at Luca's Lounge, a historic but failing Los Angeles bar previously owned by a gangster who ran a speakeasy in its basement during Prohibition. When the arrogant new manager hired to revitalize Luca's is murdered and a homeless man is accused of the crime, Mia must find the real killer to exonerate her friend. As she proceeds with her investigation, the past and present collide when she discovers that the key to solving the crime is tied directly to the bar's notorious history.

Obviously, I haven't managed to escape my love of history altogether. What's that they say? You can take the girl out of the history but... well, something like that.

I don't know what the future holds for this book. On Thursday, I'm sending it off to a freelance editor and eventually, it'll go to my agent. From there, it's anyone's guess what will happen, but I have high hopes.
Posted by Holly West at 3:00 AM

CONGRATS on finishing the manuscript. It's an awesome feeling, yeah? I hear you on historical vs. contemporary. I'm doing a period piece in Nov. for NNWM, but I'll be jumping back to the present in early 2016...and will be happy not to have to question everything.

Good luck with it, it sounds great. History can only help ;).