(Note: Two weeks ago I posted a flash fiction challenge with a due date of today. I've extended that by one week because I didn't want the Longmire review to run later.)

Here's my Longmire bonafides, just so you all know where I'm coming from. I've watched Longmire from the start but have had problems with it. This was a show that I really liked that, at times, frustrated the hell of me. Another show that elicited a similar reaction was The Killing. Scott offered some thoughts on the show on Saturday. Note to Scot: it isn't really binge watching if you watch 10 episodes in 10 days but its a step in the right direction :) 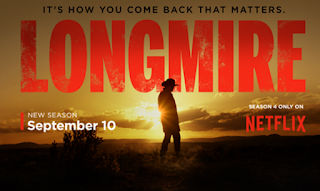 Longmire, A&E's highest rated show, was canceled then picked up by Netflix. The newest season, its fourth, recently dropped on Netflix. Before jumping into the new season we decided to rewatch the final episode of season three. There were some storylines left up in the air with the biggest being the showdown between father and son Branch and Barlow Connally. After a tense exchange there was the sound of a gunshot, both men were armed, we don't really know who was shot or what happened since it happened off screen. This was the big cliffhanger for the end of season three. For the purposes of this review I'm going to simply tell you that at least one of the Connally's was shot and I'll refer to it as the Connally shooting. This way I can talk about it some without spoiling anything.

The investigation of the Connally shooting, given the principles involved, is enough story for an entire season. And it appeared that the show was going in that direction, but the investigation story arc only lasts three episodes. This story line was uneven, a little choppy at times, rushed at other times, had scenes that made no internal sense, had scenes that were there to blatantly progress the plot, had a climax that should have been more powerful, and characters doing things that wouldn't, arguably, do. To say that particular story arc in the first three episodes bugged the shit out of me would be an understatement.

After these three episodes I was glad that the writers hadn't let the story unfold all season because I had my doubts as to their ability to successfully sustain longer arcs. Longmire has always been a show that couldn't decide if it wanted to be episodic or long form, which are the two primary modes these days. It always made moves in the long form direction but then hedged its bets by falling back a more episodic framework. Even when Longmire was episodic it still had strengths that other shows did not, but will get to that in a bit. After we had finished the season Sandra rightly made the observation that these episodes were housecleaning episodes that cleaned up the old story lines and cleared the way for the new ones.

One of the strongest things to come out of these first couple of episodes is Ferg. Ferg is a character that previously has been relegated to the office bitch. Ferg is competent and capable, otherwise he never would have got the job. They're finally letting him be a cop. And his taking on of more field duties and his office work will become part of a larger story arc as the season progresses.

Episode 4 is largely a transition episode that pivots away from the Connally shooting arc and towards other arcs. This is the show clearing its throat before moving on. What becomes apparent later in the season is just how many seeds of future story arcs were planted in this, seemingly, disposable episode.

Longmire's strengths, from the beginning, are when it deals with issues specific to its part of the country, that other parts of the country don't have to deal with: Reservation politics, strict jurisdictional issues, arcane rules and laws, institutional racism, and America's history with Indians.  There was an episode in the second season that featured W Earl Brown as a detective from the livestock bureau, this isn't the type of story you would find in a New York based cop show.  One of the issues currently affecting the middle part of the country revolves around the oil industry: pipelines, boomtowns, out of town labor with money to spend and energy to burn, large corporations with financial interests in local politics, whole counties being company towns. All of these issues, and others will be explored and come into play as the larger story arcs of season 4 play out. Longmire tells a story that others shows cannot.

As the middle episodes continued my above stated fears that the writers of Longmire weren't able to handle more long form writing abated. What becomes evident is that they are brick building, a necessary component to long form story arcs. Longmire has finally learned the art of planting seeds that pay off later, sometimes the same episode, sometimes many episodes later. So the final run of episodes result in multiple, successive payoffs of things that you didn't even know you were expecting. Very satisfying. This is just, pound for pound, a great run of episodes.

I don't want to explore all of the arcs present and how they payoff, because I want you to watch it and experience it for your self. I will talk about two additional things though. Graham Greene has been under utilized by this show. It's one of the shows weaknesses in earlier seasons, to introduce an actor of Greene's caliber then shunt his character off to the side. This season rectifies that. He's more of a force to be dealt with in this season and is finally being used in an effective way.

The second thing to talk briefly about is the introduction of Callum Keith Rennie this season. Some of the best seasons of TV in recent years have what can be called a "big bad". One antagonist, for the duration of the season, that becomes a focal point or a revolving point for the main characters to oppose. Justified used this technique to great effect, specifically in its second season with the Mags Bennett story arc. Callum Keith Rennie is this season's big bad. From a viewing perspective it's entertaining as hell. Rennie is a great, often under used actor who is used really well here. From a story telling perspective it gives focus to some of the longer story arcs.

One other thing worth mentioning, on a practical level, about the move to Netflix is the lack of commercials. Since the episodes don't have commercials they are longer. This extra running time gives the writers almost a full third of a season extra. This allows the writers to grow the characters and expand their story arcs. On Netflix Longmire is finally the show it was always meant to be.


Have you watched the new season of Longmire? What did you think of it?

Posted by Brian Lindenmuth at 4:00 AM

Glad you mentioned Mathias. Happy he's teamed up with Longmire, but, yeah, I would love to see much more. And I like how Jacob Nighthorse is morphing into... a good guy? The only character I was slightly disappointed with (until the last episode) was Vic. Katee Sackhoff is a superb actress but I felt her storyline was all over the board.

Just finished the third episode, which was hugely disappointing and felt like it lasted for two hours instead of one. I am hoping this show gets back to doing more than plot, plot, plot. My favorite parts of it are when they step back from the story and let everyone breathe. I also feel the actors don't know where their character is going so the acting often seems strained and as if they are hedging their bets. I will stick it out a bit longer but I want more local color, more character development, more setting and less plot.

Just finished episode 4. Yes, there is roughness, but I still find the characters fascinating. I am glad it is moving away from the Walt & Vic show and more on the other characters, and there struggles.

I agree that the Lucian character should be a regular. He would add conflict and support to whatever is going on in the county, and Walt's life.