I’m going to piggy back on Steve’s column from Thursday regarding word counts because I believe, as he does, that it can be a powerful motivating factor to keep us writers going.

I have used a spreadsheet since 2013 to document my word counts on all the things I’ve written. The annual cumulative word count is remarkable. It’s showed me what I produced and gave me a goal the following year to match or exceed.

When I work on a novel, you get the same thing in a microcosm. I’m going to share my August spreadsheet as it was yesterday morning for an example. 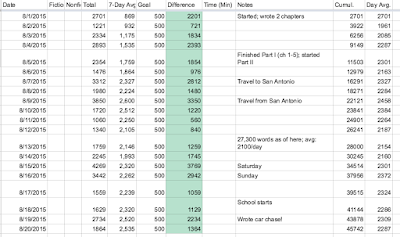 NOTE: at this point, I’ll state that my goal every day is to write. I haven’t missed a day this year. Some days were barely 100. Others have been well above that.

I use a modified version of a word count spreadsheet* developed by the SF writer Jamie Todd Rubin. I don’t track everything he tracks (I don’t do time, but I should) and I add a few columns (far right.) Based on Rubin’s desire for automation, this tracker calculates words in a Google subfolder (for the details on how it works, see Rubin’s site). So, every night, when I’m asleep, Google wakes up, adds everything up, and spits out the new number in the spreadsheet. The first thing I get to see every morning at 5am when I write is the word count achieved the previous day (the column with “Title” in the header). It’s a nice kind of parade every morning.

“7-Day Avg” is exactly that. Goal is “500” words/day. When I’m writing short stories, that’s a modest goal. Now that I’m blasting through a fantastic novel, I’m hitting that mark daily. “Difference” is how much below/above my Goal I reached on that day. I have it conditionally formatted to show green if I go 501 or above and red if I only get 499 or below.

The “Notes” column is where I can document various things, like how much I wrote in my car while traveling to and from San Antonio. The “Cumul.” column is for this novel specifically. “Day Avg.” is the daily average for this novel.

So, I’m with Steve on posting good word counts. 15 August was my personal best day not only of this book but of this year. I made a post on that. When I crest 50,000 words (an unofficial NaNoWriMo), I’ll tweet. And, when I’m done with this book, you know I’ll be tweeting the heck outta that accomplishment. After that, the next best thing I’ll be tweeting and posting about is when the book—have no clue as to title—will be available.

If you’ve toyed with the idea of a spreadsheet, I highly recommend you do it. You can use Rubin’s tracker or make your own. you will be amazed at how the word count can add up over time. Think about this: if you write 100 words a day for a year, that’s 356,000 words, or 3 novels! Anything faster than that is gravy. A spreadsheet can help you achieve your goal of writing *and finishing* a book.

Discussion of how it works

I'm a huge believer in daily word counts! Thanks for sharing!