When the Lightning Strikes

Holly's note: I've invited a few guests to write posts in the coming weeks and first up is author S.W. Lauden. I met Steve at a literary event in North Hollywood about a year ago and since then, I've had the pleasure of getting to know him and his writing. He's done a series of interviews on his own blog, which you can check out here. When I learned he had a novel coming out (and a novella, too) I knew I wanted to host him on this blog.

I'm writing this blog post on a late night flight from New York to Los Angeles. Everybody around me is either fast asleep or focused on the digital screen flickering in front of them. I’ve been looking out the window, watching the clouds light up as we pass through a Midwest thunderstorm. 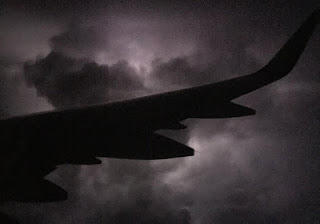 It’s got me wondering what would happen if lightning struck the plane.

At least that was the original thought. From there I imagined terrorists jumping out of their seats, only to be thwarted by a Federal Air Marshal. She’s snapping the cuffs on the bad guys a few minutes later when the thankful passengers give her a round of applause.

That’s when the lightning strikes and sends the plane into a tailspin. Lucky for us, our hero knows how to pull a commercial airliner out of a death spiral. Her name is Myrna. She’s a badass character that I’ll probably try to write a thriller about.

Call it daydreaming, an overactive imagination or insanity. Ever since I was a little kid I’ve told myself stories when I was lonely or bored. I didn’t start writing some of them down until about four years ago. Since then I’ve become a bit of an inspiration junkie, and I’m trying to kick the habit.   Let me come clean.

I've snuck out of holiday parties to email myself short story ideas. Written whole flash fiction stories on my phone while at the beach with friends and family. I've even stepped out of restaurants to leave opening lines on my own voicemail.

The last time I was on a cross-country flight like this, I bashed out a story called "Airplane Mode". That one was recently published by The Flash Fiction Offensive and features a marriage proposal that goes terribly wrong at 30,000 feet.

A drunken passenger who was aggressively flirting with a flight attendant inspired it. There was nothing I could do once the idea took flight in my mind. So I just opened my laptop and started typing—much to the chagrin of my traveling companions.

Earlier this year I had another short story called "Everything On Black" published in Crimespree Magazine. That one opens at a roulette table in the early morning hours, when everything feels electric and the casino looks like a neon hallucination.

Guess where I was when inspiration struck that time? I cashed out and headed straight to my hotel room to get the concept down before it disappeared like my pile of chips. Come to think of it, that one probably saved me a lot of lost cash. And people say that short stories don't pay these days!

It’s great when it works out like that, but what about all those other days when your mind is blank and so is the page? That’s when you’re reminded that writing is a hard job—one that takes determination, intense focus and dedication to craft.

And in case you were wondering, nothing much happens when lightning strikes a plane these days. Just like nothing much will happen with all that inspiration unless you’re willing to write your ass off. The next time I get on a cross-country flight will be for Bouchercon in early October. Right around the time my debut novel comes out. You can find out more about what inspired that right here.

My favorite spot for inspiration was on a chair lift in Mammoth, sipping peppermint schnaaps from a flask, surveying my surroundings and thinking, "this would be a great place to hide a body."

I get that itchy feeling when I find myself among people where I don't feel I quite belong. So I've developed these bulging notebooks... I like your reasoning on how Everything on Black paid off for you, Steve.