The Gospel of Creativity by Kevin Smith

I went to "church" on Wednesday night and the preacher was Kevin Smith.

Some of you will probably stop reading right now. Kevin Smith? The independent director of films like "Clerks," "Chasing Amy," and "Jersey Girl"? The guy who has a few dozen podcasts and fills them with talk of film and comics and humor all laced with profanities? Yup, that's the one.

I'm unique in the world of Kevin Smith fandom. I've never seen any of his films. I know him as a podcast personality. Three years ago, while listening to the podcast from SF Signal, there was mention of "...a Batman podcast by filmmaker Kevin Smith where he talks to Mark Hamill." All I heard was "Batman" and "Mark Hamill." The definitive voice of the Joker as far as I was concerned. I listened and fell in love with Fatman on Batman podcast. I've written about it more than once. (here, here, here, and here). Add in Hollywood Babble-On and I have some great content for the week.

Cut to a few weeks ago and word came down that Kevin Smith was going to be live in Houston. I knew I had to get tickets. A couple of friends and I met at the Improv Wednesday night. We got there at 7pm for the 8pm show. It started at 8:30...and didn't stop until 12:10am! No breaks. What followed in between was one part comedy show, one part great stories, and a huge, heaping helping of a motivational speaker who preached the gospel of creativity so well that if I hadn't already started my own company and published two books would've had me going home to write a business plan.

The format was Q&A and Smith joked that he might be able to get through five, maybe six questions. I thought he was joking. He wasn't. What is great about podcast--not just Smith's--is that there is no ticking clock or commercials butting up against the host to curtail discussion. There have been many times when an interview goes multiple parts. I love it because you can really dig deep and ask questions we listeners want to know. I assumed that in a live setting, some of that would actually be trimmed.

I assumed wrong. For each question asked, Smith gave the audience member his full attention. The answers were in depth and, dare I say it, reminiscent of Garrison Keillor in that whatever rabbit trail Smith traveled, he always came back around to the question asked. And the rabbit trails were so fun. A year older than me, Smith basically loved the same things i loved as a kid: Batman, comics, and Star Wars. He has made a name for himself just being himself. He just has twenty something years in the film industry to bolster his heritage.

What really struck me was his passion for independent creativity. One of the questions involved a podcast. Smith paused to give an impassioned tangent about the power one individual can have in this world through podcasting. He used podcasting as a real-world example but basically said that any art can save lives. He talked so well and deeply that I wasn't the only one who picked up on his motivational style. Heck, there were so many good nuggets that I flipped over the comment cards and started taking notes. Yeah, I know: I’m odd, but when you hear words of wisdom from a guy who’s been in the fray, you take notice. Among the things I took away, in case you can’t read my scribble, are these: 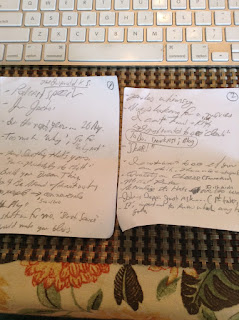 There were others, but those are the highlights. Oh, and he talked extensively about “Tusk,” the movie he made last year. He told about its genesis (via a podcast), how his daughter had a part (as a convenience store clerk), and how Johnny Depp got involved merely by Smith taking a chance and asking a question.

I absolutely loved the show and the message of independent creativity. I’m already doing the independent publishing thing (new western short story and new Benjamin Wade novel coming next month). Now, I just have to go watch some Kevin Smith films.
Posted by Scott D. Parker at 1:00 AM

I like Smith's movies (generally; Clerks is a guerrilla film classic), and became a huge fan of him personally when I read his book, TOUGH SHIT. Too many people stop at the potty mouth. He's smart, funny, and insightful, the perfect example of his own advice: find what you love, and figure out a way to make money at it. Good for him.