I write westerns. Some of them feature a railroad detective named Calvin Carter. Naturally, with the fact Carter works for a railroad, one might assume that I, your trusty author, know a little about railroads. You would be correct in that assumption. I have done some research on what it was like to work on and ride railroads in the 1880s.

But, as I don’t have a time machine, it’s all been book research. [shrug] How else does one learn about railroad in 2015? Well, living in Houston, I have a mere hour’s drive down to Galveston. Sure, it’s got fresh seafood and a decent beach, but it’s also got the Galveston Railroad Museum. Located on the north end of the historic Strand district in an awesome Art Deco building built in the 1930s, the Galveston Railroad Museum recaptures all the magic (and heat) of the glory days of rail travel. The inner lobby is a wide and tall spacious area that is, thankfully, beautifully air conditioned. It’s designed to resemble an actual train station, complete with ticket booths and benches used back in the day. The exhibits are chock full of maps and tools from the days when riding in a rail car was the epitome of travel.

The coup de grace, however, is outside in the museum’s backyard. There, on multiple rails, are actual train engines, cars, and cabooses, most of which are open to walk inside. The sheer magnitude of these train engines, both the steam ones and the diesel ones, is breathtaking for a person who drives a Toyota Matrix, my Mickey Mouse car as my wife dubs it. Some of the cars have been converted to displays with even more artifacts. Most of the cars, however, are free to walk inside. Here is where you get a glimpse of just what it was like to travel and work in the rail industry.

Those bathrooms really were small but very efficient. The sleeper cars had benches for sitting and the beds were actually pull-down kind, right above you. The slender hallways really were only built for one person. It was best to just wait your turn. The postal workers literally had a post office on wheels. 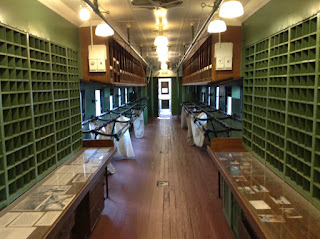 The dining cars, while spacious for the travelers, consisted of a very small kitchen and little else. 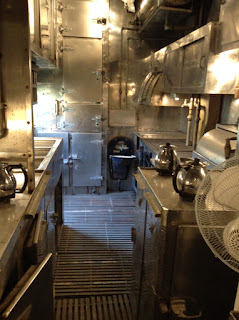 And none of it was air conditioned. Boy, do we have it made.


I’ll be honest: I went there looking for research and inspiration for some western stories. I got that. I also got inspired for my 1940s-era stories featuring Benjamin Wade and Gordon Gardner. I can pretty much bet that those guys will be taking a train in a future book.
Posted by Scott D. Parker at 1:00 AM