Thoughts on the western pt. 1 - What is the canon of western novels?

...or mapping a cannon and creating a reading map in three steps.

I realized a while ago that I've seen more westerns then I have read. So, I've got 40 yeas of western movies and TV shows under my belt but not as many books. I wanted to correct that so I've been trying to read more westerns. This will be the first in an irregular series on my thoughts and observations of the genre.

My initial wave of western genre purchases was scattershot, I started picking up cheap used western paperbacks at thrift stores, flea markets, yard sales, etc. about a year or so ago. Here's most of my small, but growing, collection of westerns (and some non-fiction western stuff). 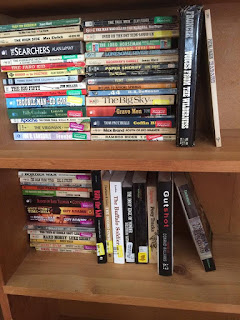 The next step is more focused. I wanted to know what the canon was. Regardless of one's opinion of a canon, they can be a useful tool. A way to see what books are considered the best, the most influential, the most popular.

After doing some research it seems that the following books would work as a small canon for the western genre (they are presented in order of release).

Turns out I've read some of these, have some others on my TBR, and I'll have to get copies of some of the others. I look forward to exploring these books to see what they have to offer.

The western genre arguably has what amounts to a codified canon. A couple of time over the years the organization The Western Writers of America has polled its members to determine the best works and authors in the 20th century. The results can be found here.

One of the things that strikes me about my cobbled together list and The Western Writers of America list is a couple of possible omissions. Two authors and two books. The authors are Luke Short and H.A. DeRosso. Short is a writer that a lot of people love and DeRosso is lesser known. The books are Deadwood by Pete Dexter and Warlock by Oakley Hall. I'm still doing a lot of reading so I can't yet say for sure if they are actual omissions or not.

The third step is relying on personal recommendations. Those books that people love. That blew their hair back. That may not appear on lists like the ones above.


What is the canon of western fiction? Do you agree with my cobbled together list? How about the broader list compiled by The Western Writers of America? What are your favorites that maybe aren't listed here? What books should I add to my tbr?

-The canon's exclusion of more daring and experimental books.

-The possible effect of the popularity of cinema on the western book. Which results in people seeing more westerns then reading.

-Variants like acid westerns, surreal westerns, weird westerns. If/how they fit into the genre. Did they come about as a result of the ubiquity of western movies?
Posted by Brian Lindenmuth at 4:00 AM

I didn't care much at all for THE SISTERS BROTHERS. That's just me, though, since the reviewers seemed to love it. Naturally I like Lee Goldberg's list.

A good list. I do think WARLOCK should be on it.

I guess the books don't fit with the geography of the western, but if we think of the west as the western edge of European-America, would James Fenimore Cooper qualify for inclusion?

I'm in a situation not unlike yours, where I am seriously pondering writing a Western, and have read not enough of them (HOMBRE, TRUE GRIT, LONESOME DOVE, DEADWOOD), so I'm curious to see where you take this. Thanks for the lists, though I agree, DEADWOOD should should be included.

I'll add - there is a little known classic called "Me and Gallagher" by Jack Farris that should not be overlooked.

The only one I can think to add to the list is THE SON by Philipp Meyer. It's not just a great western, it's a great novel. It only came out in 2013 so it may not have garnered as much fame as it deserves. I've noticed that most Chapters stores in Toronto seem to have several remaindered copies on hand. My review:
http://www.jettisoncocoon.com/2014/03/book-review-son-2013-by-phillipp-meyer.html

Here's another one who didn't care for THE SISTERS BROTHERS. It seemed like a western written by a guy who's never read a western (I think DeWitt even said that in an interview) and who thinks he's the first one to challenge some of the clichés of the genre.

Some of the more untypical westerns that should be included in the canon:

Also something by Thomas McGuane and Edward Hoagland.

Some of these take place in the 20th century, so someone might say they don't apply.

I have been reading books on the "Old West" for some 40 years... history & fiction. Even wrote a history book a few years ago. Of course I haven't read everything (my "books I have to read list" is too long for this one life)... but I'm working on it! Having said that, here is a list of books that have stood out for me (some of which may not be so well known). They are listed in no particular order:
1.The Big Sky by A B Guthrie (mountain man novel)
2.Little Big Man by Thomas Berger (white boy grows up Cheyenne and survives LBH)
3.Brules by Harry Combs (white man with vendetta against the Comanches)
4.Buffalo Nickel by C W Smith (Kiowa Indian finds wealth and trouble in early 1900s)
5.Fools Crow by James Welch (novel about the Blackfeet Indians)
6.The Last Hunt by Milton Lott (buffalo hunters in the 1880s)
7.Woman of the People by Benjamin Capps (white girl captured by the Comanches)
8.The Searchers by Alan Le May (two men search for a white girl captured by Comanches)
9.The Great Adventure by Janice Holt Giles (mountain man novel)
10.Cheyenne Autumn by Mari Sandoz (novel about the Cheyenne exodus of 1878-1879)
11.Lonesome Dove by Larry McMurtry (cattle drive from Texas to Montana)
12.Fig Tree John by Edwin Corle (Apache man living in California desert, so much better than it sounds)
13.Carry the Wind by Terry C. Johnston (mountain man novel with Titus Bass)
14. Martin's Land by Jess Shelton (white man with an Indian and white family, a little known gem)

Again, I have a lot of books still to read, so this list will no doubt be updated in the coming years.