The last couple of weeks I mentioned that I recently attended the 2015 California Crime Writers Conference in Culver City, CA. Unfortunately, I didn't attend any panels because of my duties at the registration table (my choice--there were plenty of people who volunteered to help at the desk so I could take a break), but I've enjoyed reading about other people's experience of the conference.

Here's are a few wrap-ups of note:


For my part, I was given the honor of introducing one of our speakers, Anne Perry, for her Sunday keynote speech. Travis Richardson kindly took a photo: 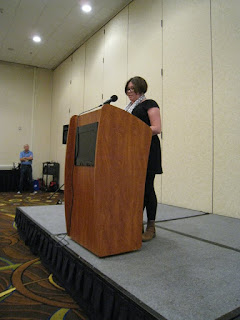 I was also on a social media panel with moderator Terry Ambrose, Diane Vallere, and Lee Nelson. Going into it, I was a little apprehensive because even though I'm very active on social media, I wasn't certain I had anything new to say about it. It was really an opportunity to re-iterate my cardinal rules of social media:
So, with all that said, I'm looking forward to the 2017 California Crime Writers Conference. Co-Chair Sue Ann Jaffarian has already roped me into being the registrar and manuscript consultation coordinator for that conference. And so, I leave you with this:

Holly, thanks for posting this. You know I love CCWC, and this one was the best yet!

I don't remember the last time I had so much fun at a conference. Really, it was just great. I'm so glad you and Susan make the trip down for it.