In praise of Newton Thornburg and Cutter and Bone 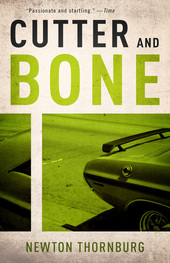 At the time of Newton Thornburg's death in May of 2011 all of his books were out of print. He was so far off the radar screen that his death wasn't even noticed by the media until weeks later. Newton Thornburg is too damn good and interesting of a novelist to remain out of of print. I love Newton Thornburg and it is a damn shame that he is largely forgotten these days. So, lets talk Thornburg.

A couple of things to know about Thornburg: He doesn't fully fit in to the crime fiction category but crime fiction fans have been the community to adopt him; He probably thought of himself more as a literary writer than a genre writer; he wasn't prolific; and, rather then write to a genre, all of his work is reworkings of a handful of themes.

Newton Thornburg was a cynical and pessimistic man through and through (more on that in a bit), and it shows in a lot of his work. It also works the best in his crime novels.

He wrote from the 60's to the early to mid 80's and it shows in his work. What I mean is that it is writing from and influenced by another era. No slam bang pyrotechnics and things build at their own pace (then, sometimes, he tacks on and resorts to an almost thrillerish ending that hurriedly ties everything off).

"For human beings finally were each as alone as dead stars and no amount of toil or love or litany could alter by a centimeter the terrible precision of their journeys."


That line is from Cutter and Bone. To me it is one of the darkest, scariest, truest, prettiest lines I've come across in a long time. For me it is the most noir line ever written.

Cutter and Bone is his masterpiece and the must read from his body of work. It was perhaps the best distillation and working of his themes. The books that came before were leading to it and the ones that came after at times channel the cranky old man side of personality a little too much. I think that the pace and necessary forward momentum of his more genre novels prevent him from dwelling too much.

Sometimes it's good to read a true noir book, one that is noir at a DNA level. A book that resets your noir compass to true North. Cutter and Bone is that book for me.

A couple of years ago Charles Ardai, editor of Hard Case Crime, wrote "Noir is crime fiction written by pessimists", in a piece at the Mulholland Books site.

I remember making a comment about that line to my wife to the effect of 'it's not pessimism if you are telling how it really is'. She quipped that that was the mark of a true cynic. Newton Thornburg was a cynic "I suppose I was pretty cynical early on,").  Even if we didn't hear it directly from him we would have the body of evidence that is Cutter and Bone to support the claim. Plus, we recognize our own.

Cynicism thy name is Alex Cutter. The character Cutter is one of the finest characters ever put to paper. One of my notions of what noir is, is embodied in the Cutter character, that noir has to do with systems defeating the individual. Cutter doesn't have an unearned chip on his shoulder and a petty grudge against the world. He was ground up and spat out by the gears of war and as such holds a mortal contempt for the larger forces and big institutions that crushed his body. David Simon wrote of the "essential triumph of institutions over individuals". This is another theme that Thornburg explores in Cutter and Bone. These larger forces (war, socio-economic, class) crush Cutter, leaving only his desire to fight back at them no matter the cost. This pursuit is a noble one. At first.  Yes, this rich man killed this girl and dammit he simply cannot get away with it. This pursuit then becomes obsession that colors everything and starts leaving a fatal wake. The institutions that had a face, that seemed surmountable, show their true size and begin to crush the foolish mortals that dared to rise up.

Thornburg gazed in to the abyss and Alex Cutter was staring back with one eye.

These characters outlook of the world and Thorton's cynicism are therefore linked because that level of cynicism cannot be faked and it informs the very DNA of Cutter and Bone. Thornburg was also great at tapping into the fears of his characters, and probably himself. At one point Mo, another great character and the original bruised angel, says,


Diversion Books recently, and without much fanfare, reissued 9 of Thornburg's 11 books as e-books (everything but Gentleman Born and Knockover). This isn't the revival that Thornburg deserves but this is the one we get.

Ross Macdonald's brand of Cali noir has been getting some attention lately due to the second season of True Detective. And deservedly so. There is a rich history of California noir to delve into if you are watching True Detective and Thornburg too has a thematic trilogy of Cali noirs: Cutter and Bone, Dreamland, and To Die in California.

All of the e-books are $2.99 each so consider giving Thornburg and his work a try.

Cutter and Bone
Dreamland
To Die in California
Valhalla
Beautiful Kate
A Man's Game
Eve's Men
The Lion at the Door
Black Angus
Posted by Brian Lindenmuth at 8:32 AM

Like a lot of people I discovered Cutter and Bone because of the movie, Cutter's Way. I thought Ivan Passer was going to be a bigtime filmmaker but that didn't really happen.

The triumph of the institutions is a good line. Usually when use institutions it's for government but Cutter and Bone did a good job of showing it as the corporation (is that the early days of Wal-Mart in the book?).

When I looked at the list, I realized that I have six or seven of the books somewhere in my collection, but have only read three. Will have to dig one out. Wasn't Thornburg in print in the UK in recent years? Seems to me that I picked up one of his books in a thrift store during a trip to England.