Today, I get to announce that THE PHANTOM AUTOMOBILES, the second book from Quadrant Fiction Studio, is now available as an ebook. You can get it via Amazon, Kobo, or Barnes and Noble, depending on your preference. The new cover image over there on the right takes you to the main book page over at Quadrant’s website. The trade paperback will arrive in June.

It’s an exciting day. A much better book announcement than WADING INTO WAR back in February when my son’s successful appendectomy sidetracked my carefully laid out plan and gave me tons of perspective.

THE PHANTOM AUTOMOBILES features Gordon Gardner, reporter for the Houston Post-Dispatch. It’s 1940 in Houston, a few weeks after the events of WADING INTO WAR. When I wrote that first book, I wanted the hero, Benjamin Wade, to have a co-star, a partner, to talk with and aid in the completion of his case. Gordon was thus created.

And I liked him. Even as I was creating the first draft, I knew that Gordon was going to star in his own book. Early readers concurred. They thought he could carry his own tale.

Now, that tale is here. 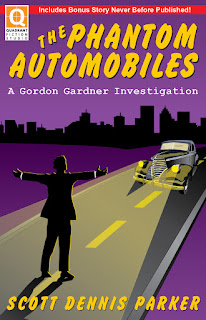 There’s not a story he can’t crack. He’s got his finger on the pulse of his town. His dogged tenacity means no politician is safe. Even the U. S. Army keeps tabs on him to ensure he safely harbors national secrets. And he looks smashing in a tux.

His latest assignment is a basic police blotter piece: a pedestrian struck dead by a car. As a reporter who is second to none, Gardner’s disappointed. How could a simple accident be worthy of his considerable talents when there are so many other more interesting stories to cover? Even his pairing with a beautiful photographer doesn’t lighten his mood.

His editor wants the piece yesterday. The police already closed the case. But then Gardner asks a simple question: why would a seemingly normal person willingly dive in front of a speeding car? Witnesses said the man went crazy just moments before he leapt to his death. What he alleged made no sense: he said the cars on the street didn’t exist and there was only one way to prove it.

He was wrong. Dead wrong.

Now, Gordon Gardner, in defiance of his editor and the police, resolves to investigate the mysterious circumstances behind the dead man’s life and uncover the real truth behind the phantom automobiles.

Exclusive! Included in this volume, a heretofore unpublished action mystery from the golden age of pulp fiction!

So, there you go. This volume also has a preview of the next book coming out this fall.

There is also a deal: offer up a review on any of those sites above and you'll get the next book published for free and before wide release. Two books for the price of one.