Recently, I was asked to contribute to an funk-themed anthology. Actually, the theme is somewhat broader than that but regardless, it's a setting I'm not all that familiar with. I was a child in the 1970s and my parents did not participate in any of the various movements happening at the time. Or if they did, I didn't know about it, which might be a good thing, depending upon the movement.

So today begins my immersion into the 1970s. The worlds of Shaft, Superfly, Serpico, Travis Bickle, Donald Goines, Kent State, Timothy Leary, the Women's Movement, the continuing Civil Rights Movement... so many topics to choose from. But it all starts with getting the zeitgeist of the time right. And for that, I'm gonna need to watch some movies, read some books, and troll the Internet for awhile.

Funny enough, I find this whole thing to be a supreme challenge--much more so than writing about 17th century London. That was easy compared to this. The reason? I think it's because everyone who experienced 17th century London first hand is dead. There's no one around except pedantic historians to call me out on my mistakes. But 1970s urban culture? Who do I think I am?

A couple of years ago, a friend of mine gave us this painting and for this project, she is my muse: 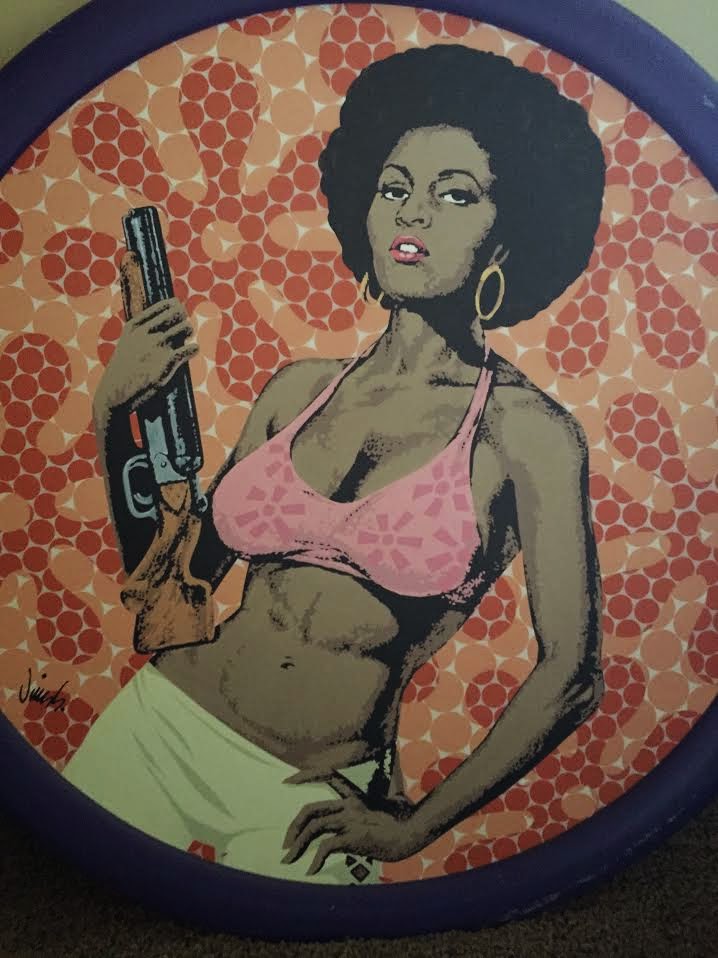 Oh, wow. You are right up my alley. 70s culture--especially the music--is something I adore. I, too, am a child of the 70s and I constantly return to those times either in movies, books written then, history books (to learn what I didn't know back then), and, especially, music. If you need some funk music on constant cycle, I bought a 3-disc box set of funk music from that era and it always gets me in the moood: http://www.amazon.com/Essential-Blaxploitation/dp/B007YIHFXG

Looking forward to your story.

These three words should get you in the mood and ease the journey.

Get yourself a soul vaccination and you'll be good to go.

Oh, absolutely I'm with Dana on Tower of Power. Another fun album--although not all funk--is Horn Rock Bands. From there, (I was already a die-hard Chicago fan) I learned about Lighthouse and The Ides of March and Chase.

Well, you're in my wheelhouse now ;).

There are a lot of good books about the 70s (but reading books is sooo boring ;)). One that I found really interesting is called "1973 Nervous Breakdown."
http://www.goodreads.com/book/show/847607.1973_Nervous_Breakdown

I also found, on retrospect, how much of the "disco sucks" movement was driven by racism and homophobia. The chapter on disco in the book "33 Revolutions per Minute" covers it very well.
http://www.goodreads.com/book/show/6905969-33-revolutions-per-minute?from_search=true

Have fun, a great era.

Thanks for the suggestions, guys! I've got a couple of ideas--one is more funkified than the other. I might write both just to see where they take me.

With that image as your muse you'll be watching Pam Grier flicks right?