Quertermous, Laukkanen and Joy at Houston’s Murder by the Book 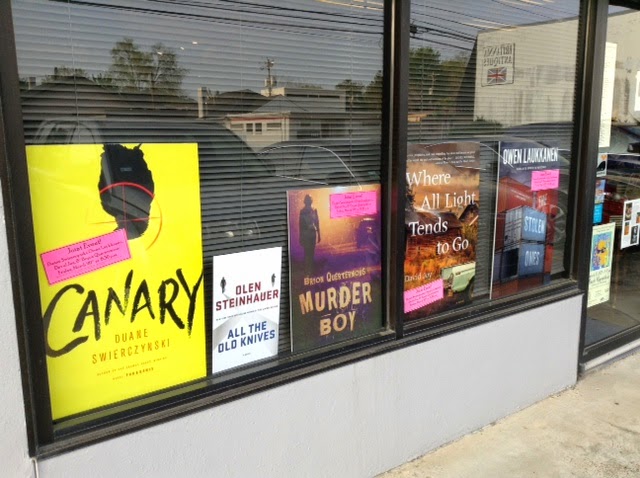 Slowly but surely, I am meeting each one of my fellow DSDers in person. I’ve met Joelle and Russell and now Bryon. He arrived at Murder by the Book last night with two other authors: David Joy and Owen Laukkanen. The fourth author, Duane Swierczynski, couldn’t make the trip from Philadelphia on account of the weather.

It’s always a funny thing to see a person in the flesh with whom you have corresponded over the internet. But he looks just like his photo over at his website. In Arizona, he wore a Flash T-shirt. I was wondering what hero garb he’d wear in Texas. Turns out to be Deadpool. (Pondering a hidden meaning…)

The Murder by the Book folks, led by owner McKenna Jordon, run these author events like a well-oiled machine. As they prepared for the talk, I chatted with author Bill Crider. It’s been awhile since I’d seen him and it was good to catch up. 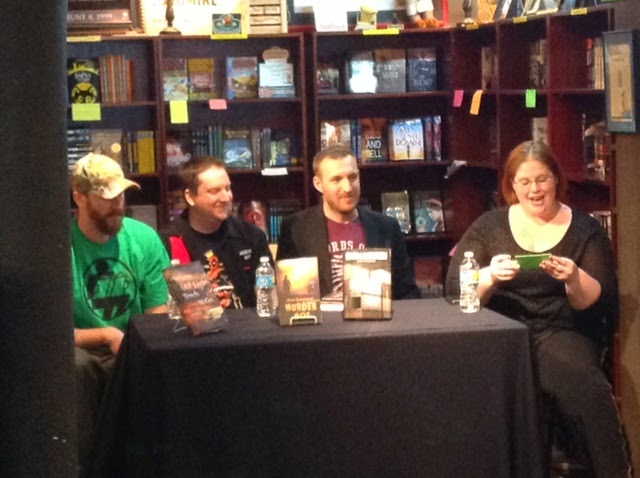 McKenna moderated the panel with five questions that each author answered. She started with each man’s writerly routine. Bryon likes to get away and write in a McDonald’s up in Michigan where he lives. It’s the only place in town without WiFi so he can work uninterrupted and work on his words. Speaking of words, Owen strives for 5,000 words per day. And I’m officially very impressed. David’s words come when they come. He wrote his debut book while holding down two jobs. So to all those folks who say they don’t have time to write, I’ll give you David as Exhibit A.

When asked about the genesis of their books, Bryon said that he struggled a lot but that these characters (in Murder Boy) kept talking to him. Then a thought occurred to him and it acted like a revelation: “The Great American Novel can’t be a murder mystery.” David got the group laughing when he mentioned that he literally burned early drafts of his book. Owen, while lobster fishing, had a lot of time to think and he started wondering about telling the story of sex slaves from the POV of the slaves themselves.

In regards to writing approaches and how they might be different for different kinds of books, David confessed that he’s not good at anything else but writing. Owen touted his YA novel where he allowed himself to be as over-the-top as possible and it resonated not only with his agent and editor but one of the folks last night. Bryon tried to tell the story of Murder Boy as a short story, short play, full-length play, and then finally novel. Through it all, he managed to wrangle the text into the novel that’s out soon. (Psst! If you were at the event, they already had the novel available so it pays to go to author events!)

Writing heroes was another topic discussed. Owen studied the Da Vinci Code to help his own dad write a thriller. He also name dropped Thomas King, of Cherokee descent, who helped Owen understand the important of looking at your own work with a critical eye. David named a lot of authors he enjoys including Larry Brown, William Gay, Ron Rash, and Jeneatte Winterson. Bryon centered on two books as the actual sparks he needed to get Murder Boy written: Duane Swierczynski’s The Wheelman and Victor Gischler’s The Pistol Poets. He also extolled a love of late 50s/early 60s pulp fiction and specifically mentioned Hard Case Crime, something with which I can wholeheartedly concur.

Lastly, McKenna asked the superpower question: which one would you like to have. Bryon started off with ‘wealth’ partially because he gravitates to the non-powered heroes in comics but also because he could then buy the gadgets to help people. David didn’t read comics too much, but he has a fascination with fish so he went went the breathing underwater power (to which Bryon commented on the New 52 version of Aquaman, another thing I can vouch for). Owen, dreading the 5am flight he took this morning, craved teleportation. He also wanted the drug from the movie Limitless so he could write more books.

It was a swell time and I look forward to meeting more of my fellow DSDers someday. But the best thing about an event like this with multiple authors is the very thing you can only get from a bookstore like Murder by the Book: you get exposed to books and authors outside your normal range.

So get to a bookstore and browse and discover something new.
Posted by Scott D. Parker at 1:00 AM

Good to see you, too, Scott.

What an awesome wrap up! Loved reading it.
Thanks for the write up.
Also, I'm with Dave, I don't think I'm good for anything else.

So wish I had been there!