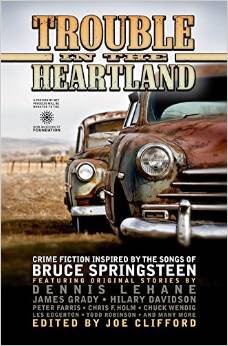 I should hope so, because some of our very own DSD'ers were involved in the collection and, well, you pay attention, right?

I'm teaming up with the guys over at  Gutter Books to put another anthology together, and really fucking pleased to announce we're doing it based around the best band in the universe for all time ever; The Replacements.

It's going to be the same basic idea. Each writer picks a song title and runs with it. There are a few details we're still to work out. We've not got a release date yet, or a finished title. The list of contributors is still be be ironed out (Is there a hint there? Maybe.)

What's really exciting about this, for me, is the difference between Bruce Springsteen and The Replacements. Springsteen's songs perhaps more instantly evoke crime fiction. Some of them are out-and-out crime stories. There's always a slight edge of romance beneath his words, whether it be the overt playful chemistry of two people, the hope that keeps the working-classes going until the weekend, or the doomed promises of a guy about to drive across the river for the one killer meeting. Bruce Springsteen, both with and without The E Street Band, has spent forty years touring the world sharing tales of hope, loss, darkness and redemption. There's plenty to play with there, and the anthology shows writers at the top of their games, running with the promise of the material.

But what about The Replacements? What about a dyslexic janitor, a shy painter, a depressive alcoholic and a thirteen year old boy who, somehow, combined to create brilliant primal rock and roll? They almost had no right to make music that good, and yet they did. And that is the point of bands like this. The pulse and energy of Raised In The City. The unrequited love of the lonely kid in Skyway. The progressive 'let 'em do what they want' plea of Androgynous. The out-of-nowhere Jazz in the middle of We're Comin' Out. The kid in If Only You Were Lonely, who thinks the only way he would stand a chance with the object of his affection is if she feels exactly as lonely as he does. The simple alchemy behind the guitar sound of Answering Machine, and the question, "how do you say 'I Miss You' to an answering machine?"

The attitude that said, yes, a bunch of kids from Minneapolis can call an album Let It Be and it can be brilliant. They were a band who were briefly handed the keys to the kingdom at a major label, a company who wanted to turn them into an MTV sensation. What did the band do with this backing? They recorded two black & white music videos; one where they all sat on a sofa and did nothing, and one where we watch the song play through the speaker of a record player, with someone's foot tapping away in the foreground.

The same year that The Replacements split, a trio from the Pacific Northwest conquered the world with a song for the disaffected, with Bobby Stinson's guitar tone, and an album title lifted off the 'Mats. What do we say to that? Never mind.

But that's what the band means to me. The fun of this anthology is going to be finding out what the music means to a whole bunch of people, and what stories the songs will inspire. So, watch this space. An anthology of crime fiction tales inspired by The Replacements? it's going to be great.

Sounds like it's going to be fantastic. Break a leg.

Your enthusiasm is contagious!