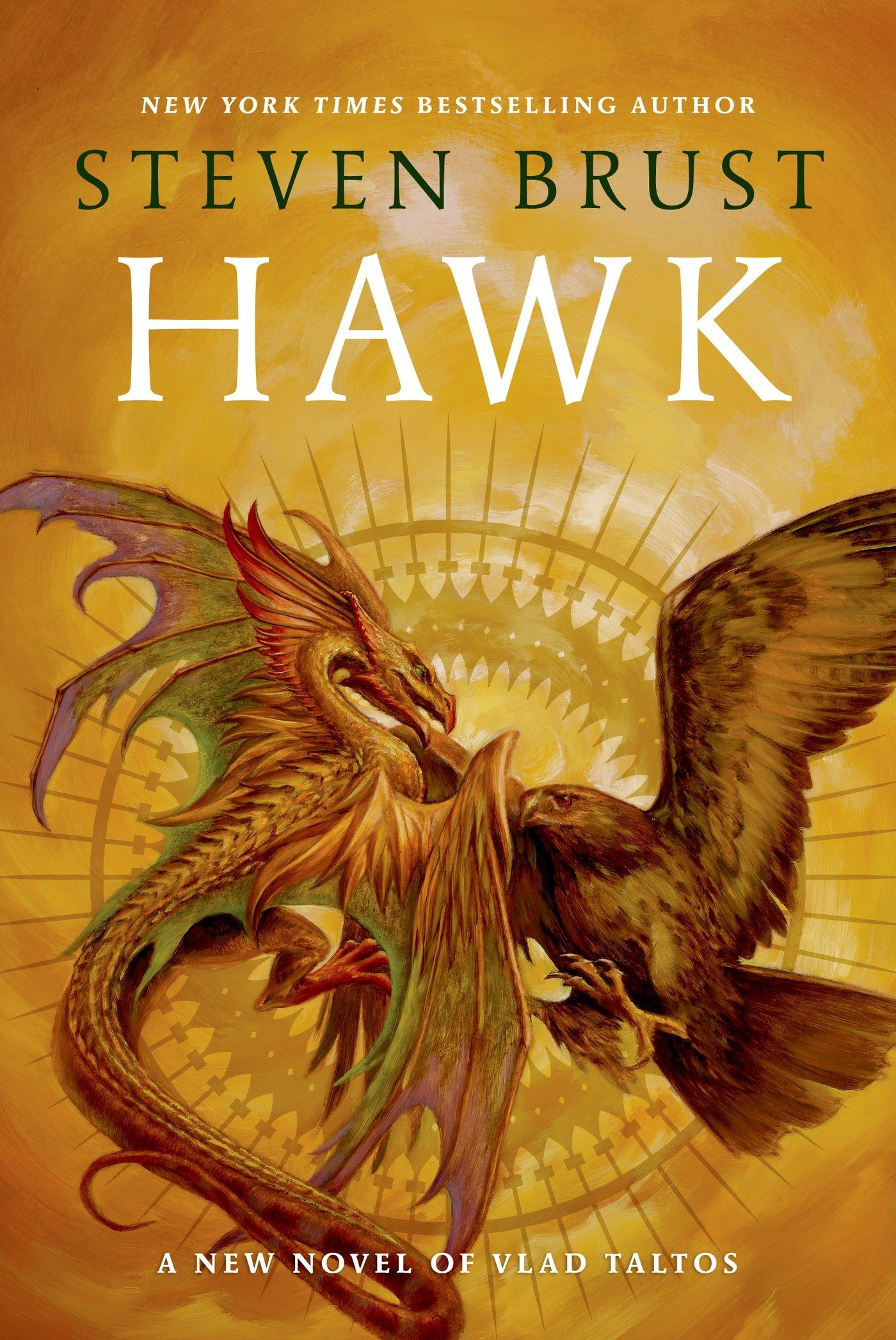 John Hornor Jacobs and I have two things in common. One is that we're both fans of the work of Steven Brust, whose new Vlad Talos novel just came out.

HAWK is, roughly, the eight billionth Vlad novel. If you don't know the series, we're talking about an assassin living among people not-his. This is swords and sorcery. Also, witchcraft, which is kind of a dirty cousin to sorcery and kinda completely different. It's crime fiction, clearly, as we've got killings and gambling and minor wars. But we've also got wars with gods and pouches of gold. And klava, which is kinda like coffee but not.

The first Vlad novel came out in the early 1980s. I found it in the back corner of Waldenbooks in the mall in Shreveport (or maybe Bossier), tucked away in the Sci-Fi/Fantasy section of the store, which has always seemed a weird combination, though the Sword and Laser people seem to have embraced it just fine.

1) Heisty Plans. There's that cleverness in here that comes with some of the best Parker books. You see pieces of the plan and want to know how everything comes together. You're intrigued. You keep reading.

2) Stabby Time. Yes, you get some good action in here. Some of the plans made lead to killings, to assassinations. This moves the story along, but it usually also moves to up the stakes. The violence in the books is pretty tame in its telling, by the way. You get the stabbing without having the author showing off in a way that he thinks is being descriptive.

3) Humor. You get some self-deprecating wisecracks without having it go on too long or get to be too annoying. Think about the best parts of Nelson Demille's John Corey. Gallows humor, too. A snarky familiar. Anyway, as a smartass, I can appreciate this and acknowledge that this was a huge draw for the 1980s version of me.

4) A Character You Care About. I've been with Vlad Taltos since 1983, but wouldn't keep coming back if I didn't like the guy. The thing that brings me to the next book -- to the next page, even -- is my craving to find out what is happening to the guy. You're in his head for thousands of pages, after all.

Anyway, if you're looking for what makes good crime fiction, you could do well following a checklist with those four things on it. Brust does, and it's what has drawn me and John Hornor Jacobs and many other folks to the Vlad Taltos books. Like I said, it's one of the two things JHJ and I have in common. (The other thing isn't very interesting.)

PS - You can help get my book banned in Texas.
Posted by Steve Weddle at 7:06 AM

Ditto for Glen Cook's Garrett series - dark, broody and stabby, with enough wise-ass to be sympathetic and enough intelligence to keep it groovy.

I love both heaps!

If it helps anyone decide, Vlad is (attitude-wise) Spenser in a fantasy setting.