Talk Dirty to Me

When I sat down to write my weekly Do Some Damage post today, I had a completely different topic in mind. Then I happened upon the post Jay wrote yesterday about writing sex and decided to write about that instead. 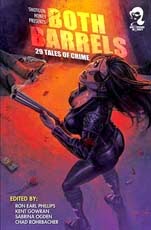 The thing is, I was just this morning thinking about this very topic--writing sex and my discomfort with it--and particularly, about a story I contributed to Shotgun Honey's first anthology, BOTH BARRELS Vol. I, called Regrets Only. It features a troubled female protagonist named Tammy Valero whose been diagnosed with incurable cancer. The realization that she's only got a few weeks to live compels her to take care of the one regret she has in life, with (of course) disastrous consequences.

Tammy isn't quite a prostitute, but she's become accustomed to using her body and sex to eke out a living and to get what she needs, both emotionally and materially. After a lifetime of addiction, abuse, and bad choices, she's managed to convince herself that whatever worth she has is wrapped up in her sexuality. She barely notices that what little satisfaction she gets from it is a poor substitute for the love, respect and security she's hungry for.

The resulting story contains many crude sexual references and a somewhat explicit sex scene that, even now, makes me uncomfortable. The scene isn't gratuitous, nor is it particularly titillating, though even if it was, that wouldn't invalidate it's appearance in the story. Mostly, it's used to illustrate Tammy's habit of compromising herself in spite of consistently dubious outcomes.

My own experiences have been very different from Tammy's, but the truth is that I know few--if any--women, including myself, who haven't compromised themselves sexually in some way because it seemed easier to capitulate than to refuse. That compromise could be as seemingly innocent as hugging a man you don't particularly want to hug. As I wrote the story, I knew I was tapping into something very personal that made me feel vulnerable and exposed--I was acknowledging that in some ways, I knew exactly what it felt like to be Tammy. That is where my discomfort lies, and where it remains.

What I've since realized is that when you tap into that vulnerable place and dig around a little bit, that's when the best writing can happen. I don't mean to limit that to sex, of course--any time you're writing about something true and real you're exposing a nerve of sorts, and sometimes that can be uncomfortable.

But that's only part of it. As Jay points out, crime writers routinely tackle some of life's toughest subjects--death, violence, drugs, war, the "misery of the human experience," so why do we shy away from writing sex scenes? I've written violence, perhaps not explicit, but violence, nonetheless. I never agonize over it as much as I do writing about sex. Hell, I don't agonize about the violence as much as I grapple with using foul language. Why is that?

The truth is that I don't even like to talk about sex, even with my close friends. Writing about it feels awkward, perhaps because it's an admission that I've done it. That it's something I like and something that interests me. That doesn't stop me from writing it--Mistress of Fortune has more explicit sex in it than most crime fiction novels I read and I put it there because I wanted it to reveal something about my protagonist. That's what the best sex scenes do--they reveal something about your characters.

Well, I have to say, this post ended up being much more interesting than the one I was going to write. Lucky you.

What are your thoughts on writing/reading sex?
Posted by Holly West at 12:33 AM

Frankly, most sex in books falls into the Elmore Leonard black hole of 'parts I tend to skip," or at least let my eyes slide over so I don't miss the rare occasion where the scene actually moves the story along or teaches me something about the character. Too often, writers justify sex scenes by saying, "They're important for opening up the character," but, too often, all we learn is, the character likes to screw. Or doesn't like to screw. Or likes/doesn't like this particular activity associated with screwing.

There aren't that many writers who can write a sex scene and make it feel organic to the story, as it's too easy to fall into one of two categories: a kid who's getting away with something naughty, or a hopelessly cosmopolitan intellectual who's above the rest of the world's need for propriety.

Of course, there's also the FIFTY SHADES OF GRAY types, but, never mind about them.

Tapping into that snapshot of our lives. I was just going to google 'how to write a sex scene' but instead decided to read Do Some Damage.

Great post, Holly. And your story sounds fantastic.
I still want to and WILL read Mistress of Fortune. I'm going to steal my ipad back from my kids specifically to read your book. I know I'll love it!