The President's Club by Nancy Gibbs and Michael Duffy 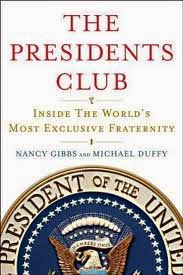 (I’ve had a lot of personal deliberations this week that have taken up a lot--a lot-- of time, so I’ve not been able to produce something writing related. I got a kick out of seeing President George H. W. Bush celebrate his 90th (90th!) birthday by doing what every hale and hearty 90 year olds do...skydiving! That led to my memory of this book. Here's my review from June 2012.)

When summer rolls around, my reading habits, just like the style of movies released in theaters, change. Where the autumn and winter brings dense novels filled with allegory and nuance, the sunny days of summer demand more straight-forward, action-packed stories. For example, my two current fiction reads are Captain Blood and The Chase, the first historical Isaac Bell adventure by Clive Cussler.

The exception to this rule is history. Ever year, as my brain is basically blazing through adventure after adventure, I also look for the Big Book of History. Typically, I crack a thick biography of a president. In past years, I've read two David McCullough tomes (Truman, John Adams) and Robert Caro's Master of the Senate. It's a testament to the writing style of modern historical writers that these biographies, filled with stories I already know the ending to, read like novels. Dusty, dry, boring works these are not. They are engaging, insightful, and, heck, have a little bit of learning thrown in.

Imagine my happiness when my penchant for presidential biographical reading happened upon the new book by Nancy Gibbs and Michael Duffy, The Presidents Club: Inside the World's Most Exclusive Fraternity. Not only do you get one president, you get thirteen! The authors recount how, in the past sixty years, sitting presidents have asked for help from their predecessors. Naturally, and not surprisingly, it started with Harry Truman.

When he inherited the presidency after Franklin Roosevelt died, Truman was woefully under-informed on the demands of the office. His natural instincts and decisiveness enabled the man from Independence to maintain the country through the end of the war, but it was in the post-war world when he needed some help. A hunger crisis threatened Europe and, with it, a growing concern that the influence of Communist Russia would sweep through the battered continent. As partisan as Truman could be, he also knew that there was one man who not only knew what it was like to sit in the president's chair, but also grew to international fame as a humanitarian as he spearheaded the various hunger crises throughout Europe during World War I. It was this expertise Truman needed in 1946 and Hoover obliged.

With this bi-partisan union, the modern Presidents Club was born. Gibbs and Duffy, both of whom work for Time Magazine (she as the Executive Editor, he as the Washington Bureau Chief), bring all their gifts of journalistic writing to the exciting tale of this behind-the-scenes stories of the former presidents and what they've done on the public stage after they turned over the reigns of power. Along the way, they deliver a history of the past sixty  year through a unique prism. I know the general history of this era pretty well, but even I learned some great stuff.

There are so many little stories in this book that it makes for some highly entertaining reading. If anyone saw the congeniality last week when President Obama welcomed back George W. Bush for the unveiling of the former president's official portrait and were curious about all the smiles and laughter between the two men, I urge you to read this book and learn the secrets behind the Presidents Club. You will be surprised and you just might change your impressions on some of the men who have served as our presidents. I know I did.
Posted by Scott D. Parker at 1:00 AM