Staking Out Your Piece of Mental Real Estate

I've talked about my use of the three-act screenwriting structure to plot my novels a few times now. I'm one of those people who need a succinct way to organize the chaos in my mind--without some sort of road map, my thoughts are in free-fall and nothing gets done.


Now, after a brief hiatus from writing, I'm back to plotting my latest WIP and hope to be finished this week. And this brings me to a subject I've been thinking about lately: Mental Real Estate.

Until recently, I'd never heard the term before. But while scouring Alex Sokoloff's handy book, Screenwriting Tricks for Authors, for well, tricks, I came upon a reference to mental real estate (sometimes integrated with "high concept"). Here is a rather wordy run-down of what mental real estate is:

"I name something, and you either recognize it, or you don't. Could be a person, place, or thing, like the classic twenty questions game. If you recognize the thing I tell you, that means it's taking up space in your head--tangling up a few billion neurons--residing on a chunk of mental real estate. That makes it valuable, because if something is taking up space in your head, chance are, it's taking up space in a good percentage of other heads across the country. And Hollywood can use that. It's the main commodity of the town. Hollywood buys, sells, and trades in mental real estate."


Basically, mental real estate is anything that takes up space in our collective and individual consciousness--those elements that the writer can be reasonably assured will be familiar to their potential audience. It can be pop culture references, iconic characters, history, human emotions, universal life themes, shared experiences... the list is infinite. 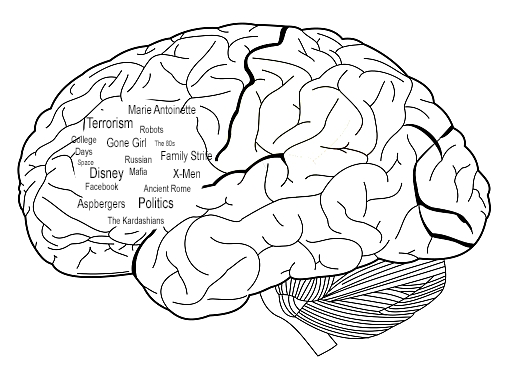 As writers, why are we interested in mental real estate? Because if we can use pre-established elements to help us strike a chord with a potential reader, it makes our job easier. It can make the difference between our books gathering dust on the bookshelf or being carried to the checkout register. It can be the thing that gets an agent to request your manuscript instead of sending out a canned rejection. It can be the spark that persuades an editor to take a chance on your book instead of the countless others being pummeled at them.

I just took a look at the latest NY Times Best Seller list, searching for examples of mental real estate. I realized that without exception, the authors themselves--James Patterson, Gillian Flynn, David Baldacci, Donna Tartt, Dan Brown--are the properties. Most of us don't have that sort of name recognition to trade in, so until we become household names, we've got to come up with some other form of mental real estate.

As the quote above points out, Hollywood shamelessly pedals mental real estate, to the point that cheapens the concept. However, whether we're aware of it or not, we're all trading in mental real estate to some degree or another. By writing about the subjects that are important to you, you're staking out a piece of mental real estate, however big or small. My challenge to you is to become more conscience about how you use it, and how you can use it to your advantage.

Some writers deal in huge mental real estate--think The DaVinci Code (conspiracy in the Catholic Church), Schindler's List (the Holocaust), or Wicked (The Wizard of Oz). Heck, with the publication of The Girl with the Dragon Tattoo, being a Scandinavian writer became big mental real estate. Go on then, I'm sure you can think of many more examples than I can.

But many of us choose smaller properties. Let's take Winter's Bone by Daniel Woodrell, for example. The mental real estate on which it's built--poverty in the Ozarks, meth-labs, a girl's struggle to protect her family--aren't all that big or, with the exception of protecting one's family, aren't all that universal (unless you happen to be a meth cook in the backwoods of Missouri). But Woodrell wanted to explore this world and did it with so deft a hand that he helped to make Rural Noir a piece of mental real estate in and of itself.

It's tempting to equate the concept of "mental real estate" to "chasing trends." In fact, it can be--writers do it all the time. Personally, writing is too hard for me to waste time trying to duplicate what another author has done, no matter how successful they might be. I'd rather carve out my own little piece of land (a topic or theme that I'm interested in) and shape it to the best of my ability. To use Mistress of Fortune as an example, its main piece of mental real estate is Restoration-era London, a period I've been interested in since I was a teenager. Sure, if I wanted to write a historical I could've used a more valuable piece of mental real estate, like Tudor England, but that's not my jam. I'm still hoping that Restoration Noir will become a thing.

When I first started plotting the novel, I'd never heard of mental real estate. I'd come up with a premise, a protagonist, and a setting, all of which I was interested in and really wanted to write about. But with the introduction mental real estate into my bag o' tricks, I looked for ways I could still tell my story while still incorporating those recognizable details that will make the story more saleable. Doing so took the story I was interested in writing and elevated it to the next level (well, hopefully. It's not done yet, so we'll have to see about that).

Really thought-provoking post. And I think you are right, that we all stake out our own. I think it can also be looked at as those themes we keep revisiting in our writing, as well.

Love this piece and this concept. It all fits, when you start to think about the books that live on the NYT bestseller list. Will be incorporating this into my works starting now.

Just over the weekend, at Houston's Comicpalooza, I attended a session with John Scalzi. He commented on how his stories intentionally aim at a general audience. That seems to be a piece of mental real estate, too.