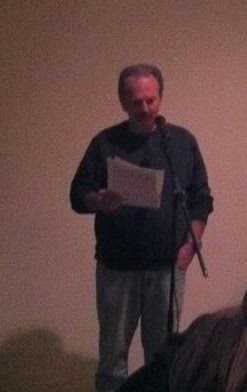 The writing community lost a talented and good friend early Saturday morning when AJ (Bill) Hayes passed away. AJ was a huge presence in the online crime fiction world, contributing stories and poetry, editing, and offering support to other writers. I was fortunate enough to have spent time with him in person on several occasions, most notably at LA’s Noir at the Bar. He and his wife, Thury, drove up from the San Diego area for nearly every one of them, and AJ’s participation in this event, both as a reader and a member of the audience, was always something I looked forward to.
I can see his friendly eyes and big smile as I write this. AJ had a wonderful way about him—he just always seemed so happy to see you.
The first time I heard AJ read his work aloud was at an event in 2011 that Eric Beetner asked us to participate in. AJ (accompanied by Thury, of course), Eric, Josh Stallings, Stephen Blackmoore, and I met up at LA’s Greystone Mansion, to read our stories as part of an art installation.
Greystone Mansion itself has an ominous history; Edward Doheny (a well known name in Los Angeles) gave the parcel of land it sits on to his son, Ned, and his new bride, Lucy, as a wedding gift in 1926. Construction on the palatial home began in February 1927, and the family moved in to the residence in September 1928. Five months later, Ned Doheny was found shot to death inside his bedroom at the age of 36, the victim of an apparent murder-suicide committed by his longtime friend and employee, Hugh Plunket.
That's the "official" story, at least. But no one seems to know what really happened in that room on February 16, 1929.
Various other art installations were presented throughout the house, but the group of us got the best location: the room where the murder took place. It was empty of furniture (except for a toppled over chair strategically placed to mimic the one found at the crime scene) and we all stood around or perched ourselves on the window sills, listening to each other read our stories while a film based on a Raymond Chandler novel that referenced the murder played on a silent loop, projected onto one of the walls. Attendees wandered in and out, some pausing for awhile to listen, while others just poked their heads in. It was the oddest event I’m ever likely to attend, but the location, the circumstances, and most importantly, the company made it one I'll never forget.
When AJ stepped up to the microphone and began to read, I thought, "Wow, this guy can write." The images he provoked were powerful and his words were unflinching. Beyond that happy smile and his unfailing support, that's what I'll remember about AJ Hayes. The guy could write.

RIP, AJ. It was a pleasure knowing you.

Holly, how you rock a tribute. Our beloved Fedora Fella wrote me as whe was getting excited for that very event -- even in true AJ 'thoroughness' made me go through all the history-links he sent on the place.

After the manse event, it filled up a slew of emails - his ongoing enthuse. I'll seek them up and send to you, Eric and the others. He was so jazzed about that event. Done me and my pain good to hear you relate it as it came down.

This line though, in your closing ~ "The images he provoked were powerful and his words were unflinching."

You know he's tippin' the fedora at you mighty fine on that one Lady West.

Thanks for this superb share, wondering if we can include it in a book we're putting together for the family and those AJ loyals they call "you writer-folks".

You said Josh Stallings was there. When I was Albany-bound for my first foray into the Bouchercon crowd, I asked him who he wanted me to say 'Hey' to for him. His response, "You'll already bump into Beetner, I know that. He's given a lot of good writers the right place to let their words and voices out. But find Josh Stallings. Share a hug. I won't tell you why. You'll find out."

I did, said this glad Grasshopper to the Grandfather of where superb words hail.

~ Absolutely*Kate
lovin' my friend, colleague, mentor, jiver in all that jazz

Lovely that, Holly. Thanks for sharing. Bill was a great man and will live forever with us all.