Everything I know about San Francisco politics in the late 70's I learned from Jello Biafra's spoken word piece "Running for Mayor".

Tenderloin takes place in San Francisco in 1978 using key political figures and other folks from that time in a fictional setting. 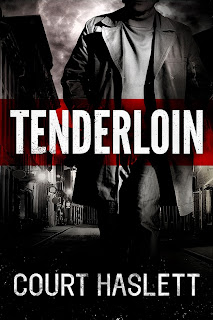 Jim Jones and The Peoples Temple figure prominently throughout the story. This works in some ways and doesn't quite work in others. It works because Jones and the Temple were a bad an omnipresent force in San Francisco at the time. They were feared by some people and some of these people felt directly the hand of Jones' retribution. You can't write a story that takes place in late 70's San Francisco and NOT include Jim Jones. It doesn't click in a couple of ways though. Each chapter features a date and time stamp. It's pretty easy, given the role of the Temple in the plot, what these time stamps are leading to. And since we know how that particular bit of history wraps up we know Jones (or his proxy's) probably isn't going to wind up being the big baddy who killed the hooker with a heart of gold. [There is also the usual problem of a series character being targeted, we know he is going to be injured but not killed. But I've long since learned to ignore this if I like what I'm reading and I did here]. I'm not sure the timestamps were necessary.

The Jim Jones presence is directly felt by the head of The Temples special security force. A scary ass woman that is a strait killer and a True Believer. Information at the end of the book tells us that this person actually existed. I would gather that not much specific information exists about her but Haslett does a great job of making sure she is feared by all, including the reader.

I did have a couple of nits to pick. There were a couple of spots that I would have enjoyed discussing with the author if I had been the editor. I'll give two examples. 1) Sleeper is a guy who doesn't watch a lot of TV, if hardly at all. He spends time at the track, at the boxing gym, at the bar, walking, talking with friends and associates. So it really felt out of place when he and another character were trading pop culture quips based on Three's Company. 2) A running subplot involves Sleeper and a neighbor friend building up a savings of gambling winnings to buy back the neighbors record collection. Sleeper makes a side comment about laying down some small bets here and there that has increased the amount they have saved. Except the reader has spent a lot of that time with Sleeper so when exactly did he get to the bookie. Hasn't he been too busy doing other A-plot related things? Again, like I said, small things but there were a few of them. Your mileage may vary.

Tenderloin doesn't reinvent the wheel, but it is an entertaining look at the time, featuring a who's who of pulp and crime fiction types. If you are looking for a quick and fun read look no farther.

Recommended.
Posted by Brian Lindenmuth at 8:16 AM