Do you ever intentionally slow down your reading pace of a series that is either over (e.g., Ian Fleming's original series of James Bond novels or Conan Doyle's Sherlock Holmes tales) or has relatively few entries? I do that. I read the Bond novels very slowly, maybe one a year, because I want to savor them and, to be honest, I kind of don't want to reach the end. When I get to that last book, I know that there will be no more Fleming/Bond books. And that will be a sad day.

A modern example of that is the Isaac Bell adventures by Clive Cussler and Justin Scott. I was thinking about this series after reading a review of The Thief by Ron Fortier. I am eager to move forward to the fourth book in this series, but I know that there are only seven (to date) so I read them about once a year. But I'm behind. Intentionally. That way, if I really get in an Isaac Bell mood, I can catch up and read two or three in a row instead of waiting a whole year for the next one.

I'm wondering if I'm alone in this weird thought process?

To bring my ideas about this series to this blog, here is a review I wrote back in 2012 on The Wrecker. 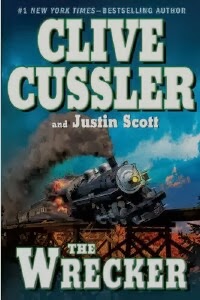 The adventures of Isaac Bell came to me in a rather serendipitous way. On the one hand, I was in a grocery store last year and I saw a book on the shelf and admired the cover. The cover of The Race showed two planes, clearly early 20th Century vintage, engaged in a dogfight over a city. The image got me for numerous reasons, but, since the To Be Read pile is so large, I basically forgot about it. Cut to New Year’s Day 2012 when my cousin, an avid railroad enthusiast, told me about "this series about a detective who operates on railroads." Cool, I said, seeing as how I had created my own railroad detective and didn’t want to copy anyone else, what’s the title? The Chase by Clive Cussler. Well, image my wonder when, upon looking up The Chase, I discovered That Cover I had forgotten about. And, thus, I found my way not only to Clive Cussler (and Justin Scott, his co-author) but also to Detective Isaac Bell.

I read The Chase earlier this year and was completely entertained. The Wrecker maintains the excitement, the intrigue, and the chess-like machinations of the hero and the villain. The hero is Isaac Bell, a detective of the Van Dorn Detective agency. A tall man with blond hair and mustache, he is the imperturbable, stoic hero of many a story you've read before. What sets him apart isn't his good looks, skill with a gun, nor his hand-to-hand ability. It's that Bell actually gets beat up, dirty, and flummoxed throughout both books I've read so far. He's a bit like John McClain from Die Hard. He may win, but it'll exact a price.

The title character of The Wrecker is the villain. That nickname is the moniker given to the man blowing up various railroads of the Southern Pacific railway in the Cascade Mountains, Oregon, all in an attempt to bankrupt the company. The president of the railway hires the Van Dorn Detective Agency to stop it. Set in 1907, what follows is a wonderful cat-and-mouse game between Bell and the Wrecker.

By giving his villain a nickname, Cussler is able to hide the true identity of the Wrecker for more than half the book. Interestingly, once the identity is revealed, Cussler actually fluctuates between the actual name and the nickname. I found that a little odd. What really sets this book apart from your general thriller is the timeframe. The year 1907 is just modern and technological enough where you have the beginnings of automobiles, phones, and planes. At the same time, it's old enough to where railroads and telegraph are the primary means of transportation and communication. What this mix does for a reader in 2012 is build in some interesting tension. If a hero in 2012 needs to travel across the country from Oregon to New York, it's a plane ride of a few hours. Need to contact some allies across the country? Use the cell phone. Detective Bell can't do that. A trip across the continent takes days. At one point, he needs to contact associates in Oregon while he's in Los Angeles. With the telegraph lines cut, there is only one way to communicate information: in person. That means, take the train. All of this builds tension and the excitement increases.

I've only read three Cussler books, two in the last few months. They are so well choreographed that they just sweep you along. The history is always fascinating and the detail is accurate. If you are tired of the modern techno-thriller, try a historical thriller featuring Isaac Bell. Very good read.
Posted by Scott D. Parker at 1:00 AM

I do this all the time. I revere James Lee Burke but haven't read his last four. I am thrilled they're on the shelf, but I won't read them yet. There are others, too, and that's the paradox: the best writers are the ones whose books I don't read.

Boy, does that sound wrong.

I don't slow down reading a writer's output, though I don't binge read like I used to. (Too many good writers demanding an audience.) I have noticed for years how I will slow down reading a book I'm digging, so it doesn't end too soon. I catch one I'm love with and I drag that baby out.