City Noir - The Soundtrack to an Invisible Movie 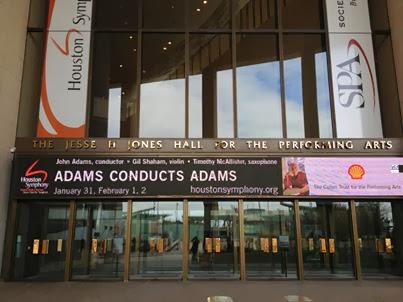 A little over three years ago, I happened upon an episode of PBS's "Great Performances" when they showed the debut concert of the LA Philharmonic conducted by the exciting Gustavo Dudamel. The piece that grabbed my attention was the work Dudamel commissioned from John Adams. “City Noir” is that wonderful type of modern classical music: melodic, with rhythms that were born in the 20th Century, and yet different enough that you know you’re not listening to Mozart. I recorded that rebroadcast watched it more than a few times. When the piece was made available on iTunes, I eagerly downloaded it. When the DVD of that concert was released, I snapped it up forthwith.

Needless to say, I fell in love with this piece of music. To hear Adams describe it (his blog; a local radio interview), City Noir is a soundtrack to a movie that doesn't exist. Taking his inspiration from the music from the noir films of the 1940s and 1950s, Adams wove a smorgasbord of sounds and textures the evoke dozens of images. One particular section of the work brings to mind the hero and the girl being chased through the hills and valleys outside of Los Angles. The movie is, of course, black and white in the theater of my mind. I have listened to this piece constantly for years. It was my gateway to modern classical music, a journal that I am very much enjoying.

To borrow a quote from Star Wars, as of last night, the circle is now complete. This weekend, John Adams himself is conducting the Houston Symphony. And the main piece is City Noir. As soon as this event landed on the calendar, I was there. I expected the LA Philharmonic to tour with this music, but hearing our own local symphony play it was even better. Seeing Adams conduct his own work was wonderful. It's not an easy piece to play and our symphony did a great job. I was so used to the one recording that I actually hear nuances I had never heard before. It's one of the reasons why listening to live music is so cool.

Lastly, hearing City Noir in 2009 led me to seek out more modern classical music. The performance last night included Korngold's Violin Concerto in D Major. The soloist was Gil Shaham. Thanks to Adams's piece, I now have a new composer and concerto to add to my growing list. A note about Shaham: I see few live symphony concerts so I can't truly compare, but the sheer bliss Shaham exuded while on stage was palpable. He was all but grinning ear to ear. To see him enjoy the concerto made an already great performance that much better. I will definitely be seeking out his recording of the Korngold concerto.

If you like old film noir movies, seek out and find a recording of City Noir. You will see a movie in your mind.
Posted by Scott D. Parker at 1:00 AM