In case you missed it – for the last few weeks, I’ve been on the road promoting book two of The Testing Trilogy, INDEPENDENT STUDY.  And what a crazy couple of weeks it was.

Did I have fun?

Would I do it again?

Give me a couple of weeks to catch up on sleep, get my house organized and write – then sign me up!

Tour was filled with all sorts of experiences – from the interesting to the wonderful to the totally bizarre.  I won’t be able to capture all of those experiences, but I’m happy to give you some of the highlights. 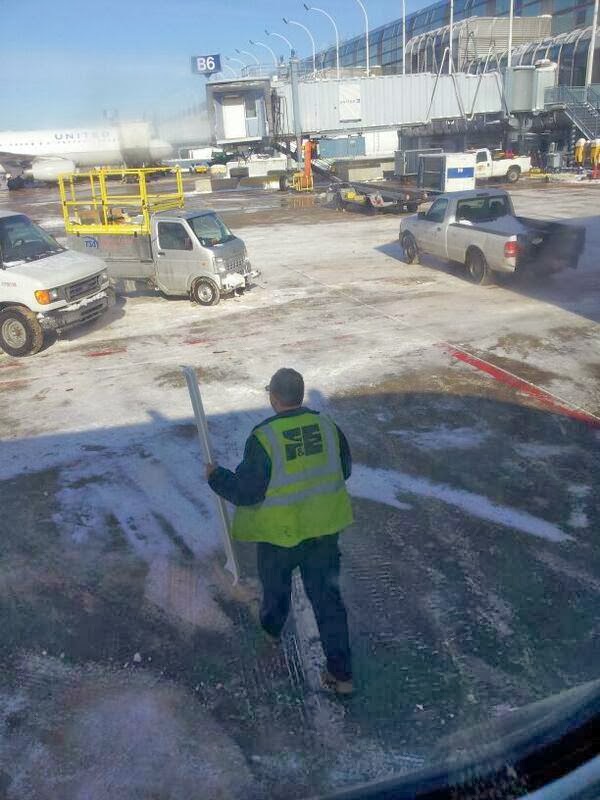 First off – no one should ever travel on a plane with me.  Until this past Friday, I managed to avoid any weather delays, which is a miracle.  However, I did have other strange airplane adventures.  My first two flights were delayed due to unusual mechanical issues.  The first was as broken overhead bin compartment – see photo.  A passenger must have been eating her Wheaties, because when she opened the bin to shove her jacket inside, she took the whole door off.  Oops.  And I’m not sure if super human strength or a very large nail caused the flat tire on my second flight but I was impressed at how quickly the mechanics can change an airplane tire.  Go mechanics!   I was also impressed at how fast paramedics can get a patient off of a plane, which was something I witnessed upon landing in Austin. 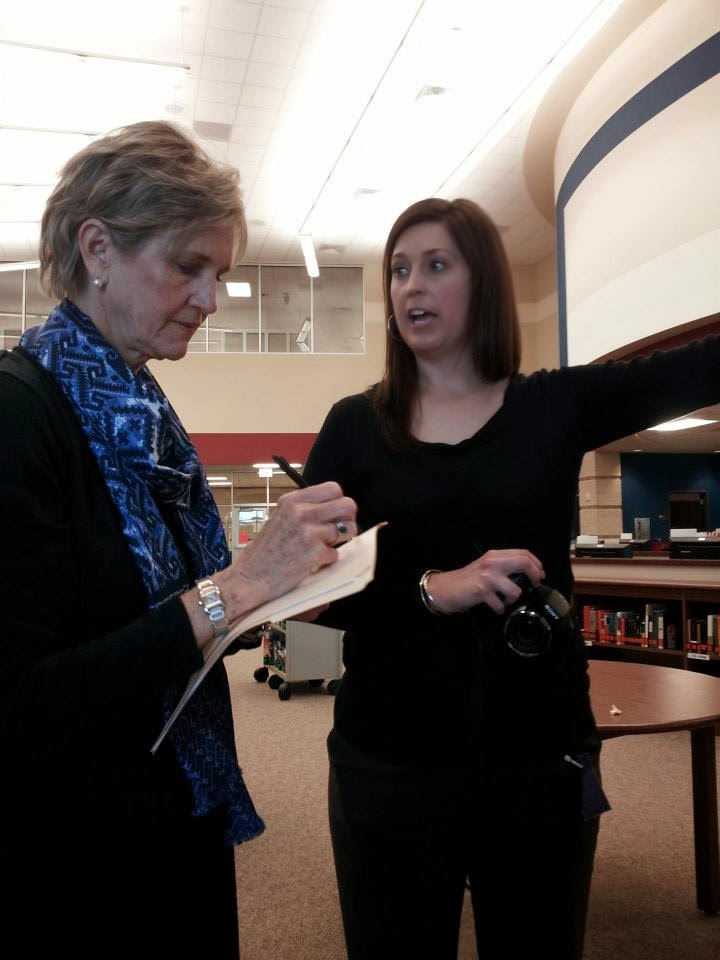 One thing I did learn during tour was there are amazing people out there called media escorts.  They meet you at the airport, make sure you get to the schools and the bookstore events and your hotel and do it all with a friendly smile and an attitude that makes you feel as if you’ve been friends forever.  Annette, Kristen, Dolores, Gail, Mary Ann and Paul – thanks for making sure I never got lost!  And Kristen – if you’re reading this – I totally need the recipe for those cookies you made.  They were amazing.

The 21C Museum Hotel was by far the most unusual and fun hotel I’ve ever stayed at.  From the penguins and prairie dogs that greeted me at the door…. 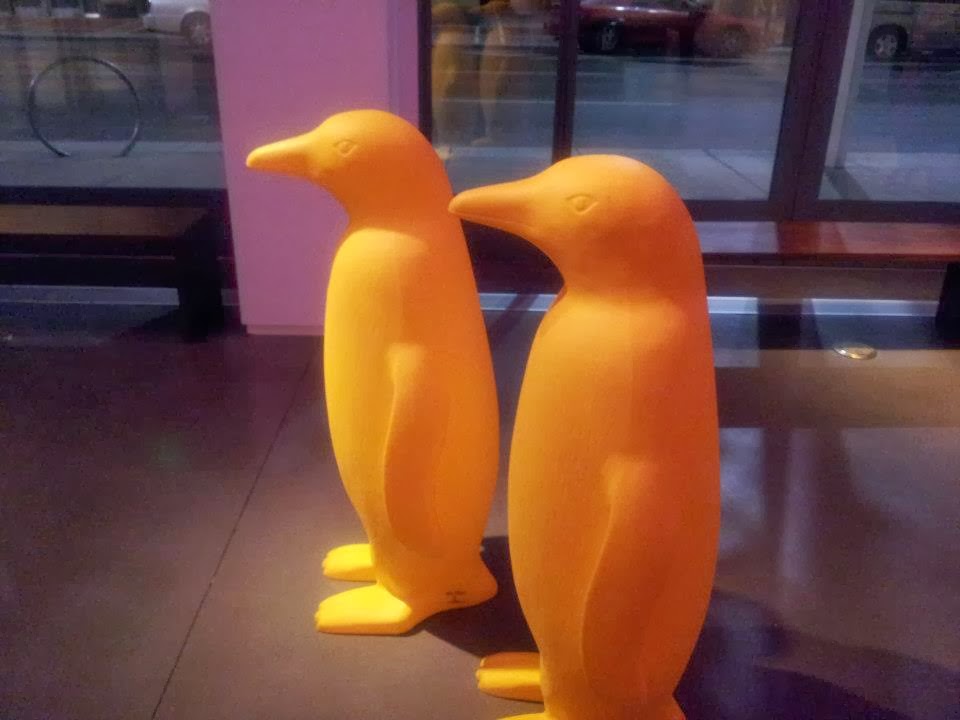 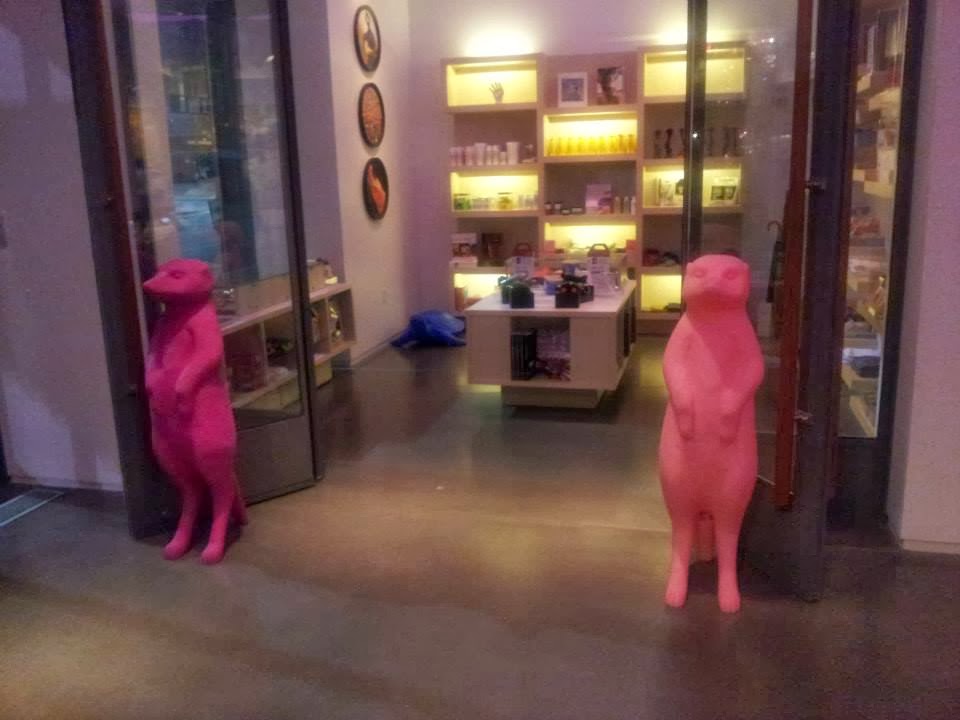 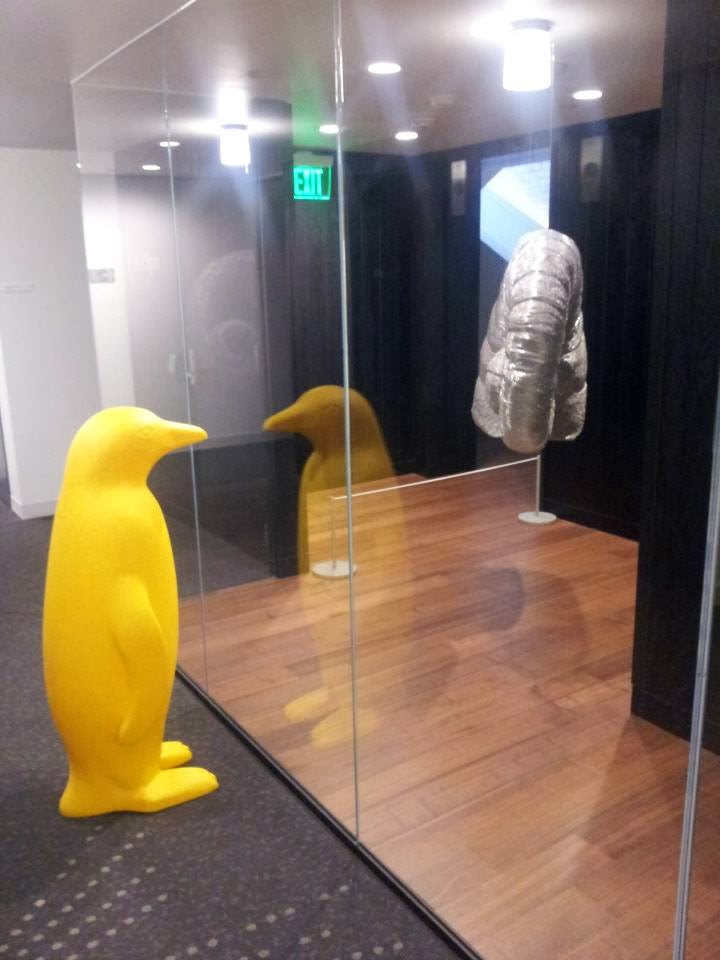 To the artwork hanging around the hotel…

To the strange body parts in the tile of my hotel room bathroom…. 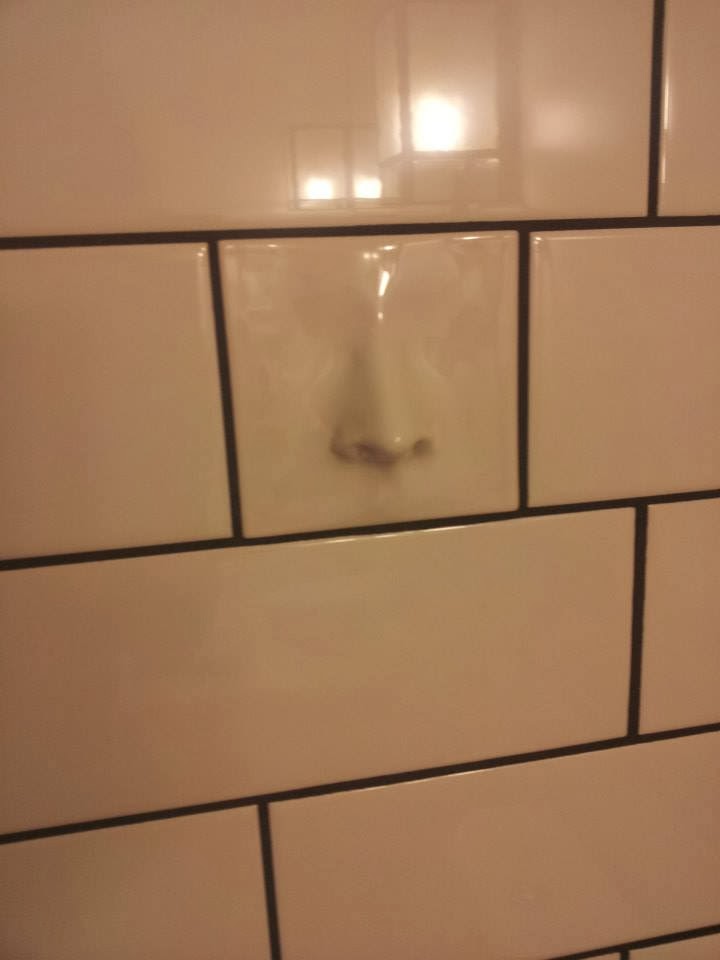 The whole experience was memorable.  And it was even more memorable when I realized that I wasn’t hallucinating when I thought penguins were popping up in places I could swear they hadn’t been before.  Kudos to a hotel staff for a sense of humor which inspired them to move the penguins around….at least I’m assuming it was due to their sense of humor.  It could be their 2014 exercise plan.  I guess I’ll have to go back in 2015 to see if they are still picking up and relocating penguins.

And in between the flights, the hotels and the driving from place to place there were readers.  Sometimes there were 10 people at an event.  Other times there were hundreds.  No matter the number, the enthusiasm for reading touched me deeply and made me so grateful to be a part of this strange and wonderful world of publishing.  I had the opportunity to talk to honors students getting ready to set the world on fire in various math and science related fields.  I chatted with middle school students who thought meeting an author was the coolest experience ever.  And perhaps most memorable was the day I got to discuss my writing journey (from actor and singer to writer and all the rejection in between) with students who would be the first in their family to ever go to college.  The discussion we had about rejection and how important it is to get up after you’ve been pushed down is something that will last with me for the rest of my life. 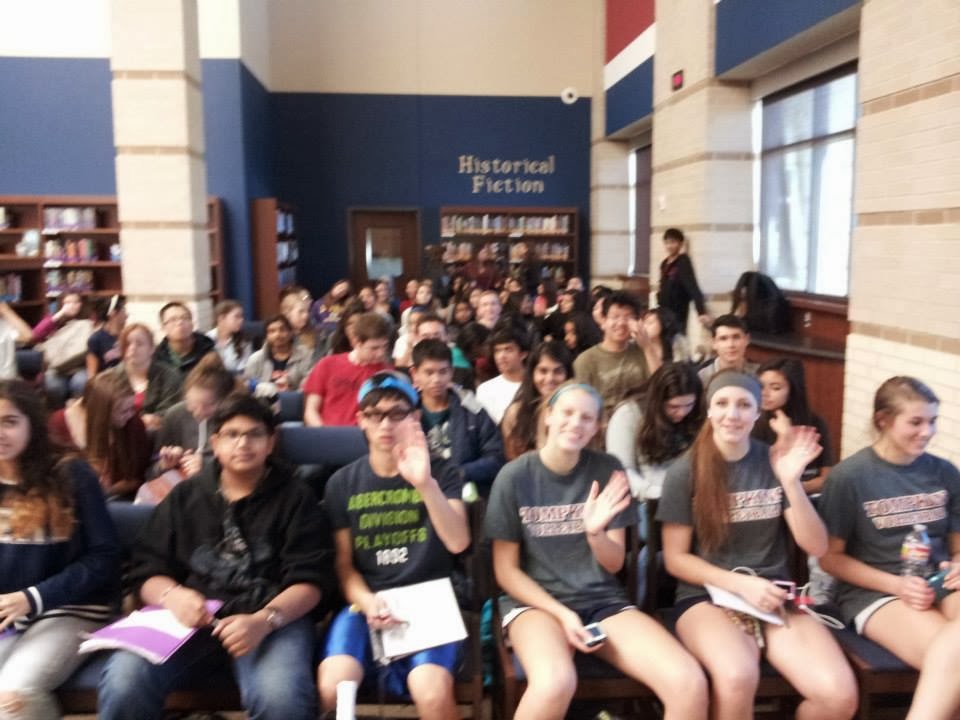 So will the moment sitting in a Mexican restaurant next to my hotel in Albuquerque with two gentlemen (Robert and Eric) who invited me to sit with them and were surprised when I almost burst into tears when I got the news that INDEPENDENT STUDY hit #8 on The New York Times Best Seller List. 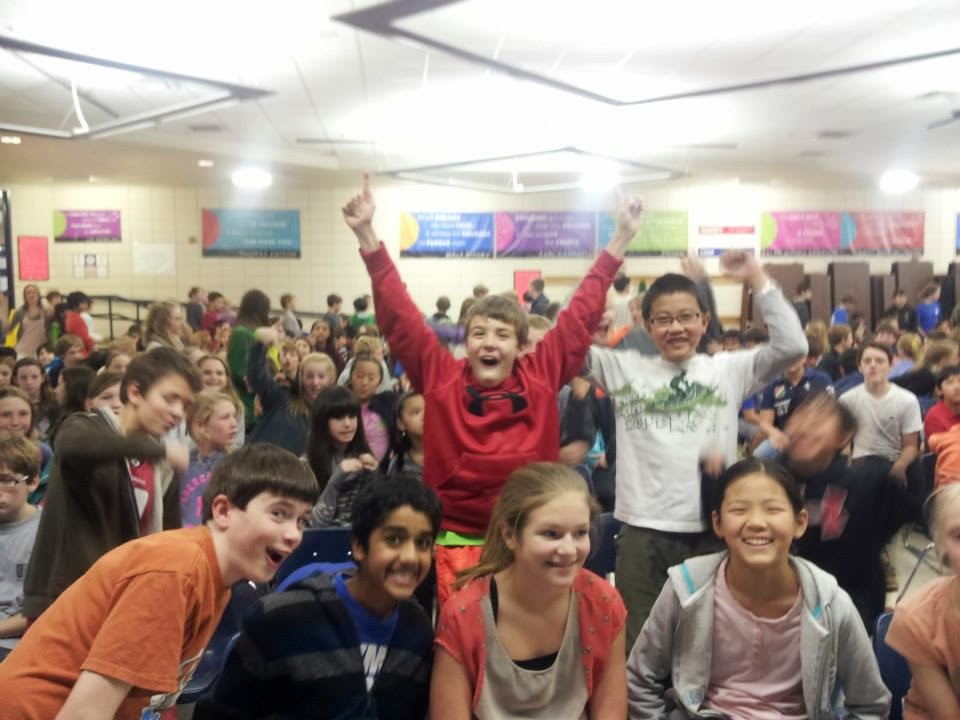 Yes.  If my publisher asks me to tour again, I will say yes.  Gladly.  Because having the chance to make a career out of writing has giving me so many amazing memories and experiences.  Touring gives me a chance to give something back, to say thank you to the booksellers and readers who have embraced my stories and to create new memories that will stay with me forever.

But since I plan on being home for at least the next few weeks – I want to say thank you to all of you for being here through this journey.  When I started blogging on Do Some Damage, I had no idea where this writing thing would take me.  I had no idea the excitement, the terror, the joy and all the emotions in between I’d feel.  You have all been such an important companion in this adventure.  I can’t wait to see where it will take all of us next!

Thanks for letting us enjoy the glamorous life vicariously!

Great post and I'm glad you had a good tour.

What a fun look at your trip. Thanks for taking us along for some of it, Joelle!! Loved reading about the rejection/get back up session with the students. Fantastic!