Lessons from the Batcave

I learned something this week from the Batcave. Well, it's not really the Batcave. It's actually the Fatcave, but you can't have a Fatcave without the Batcave.

Speak sense, man! Hark! I shall.

Most of y'all know that Batman is my favorite superhero. One of the absolute best Batman-related thing currently being produced is Kevin Smith's Fatman on Batman podcast. He refers to his house/recording studio as the "Fatcave," so there's the reason for that reference. If you are remotely interested in Batman, I can't recommend this podcast highly enough. But if you are also interested in how creative people come to do the things they do, this podcast is a must.

This year is the year in which I learned that I could write and write consistently. I now know that I can sit anywhere and bang out words and string along paragraphs to makes stories or novels. I'd like to think that the more I'm writing, the better my writing is. That's the nature of practice, right? But what about the other side of the equation? What about the imagination part?

On my own, I've been studying some of my favorite novels to break them down into their component parts to learn how a book is constructed. But what about the germ of an idea? Sometimes, I'll admit, that my imagination is the thing that needs work. Sometimes, I'd almost like a prompt. On the things I do imagine, I'm always curious how others use their imagination and create ideas.

That's where Kevin Smith comes in. On his 51st episode, his guest was Paul Dini, the same man who inaugurated this podcast in episode one. As Smith is wont to do, there is some meandering talk, but something magical happens about a half hour into the 90-minute podcast. The two of them discuss the TV spot of the new Batman: Origins video game. Here it is. The commercial is fantastic. What it shows is a series of images, all close up on Bruce Wayne, from the moment the man kills his parts, to the funeral, to prep school, to high school, to him training to be Batman, and finally as the Dark Knight himself. As steeped as I am in Bat-lore, the prep school and high school scenes were new to me.

And they were new to Smith and Dini. They both zero in on the prep school shot and talk about that part of Wayne's life is underwritten. Then, the magic starts. The two Bat-fans start brainstorming a potential TV show centering on Bruce Wayne in prep school. Their enthusiasm for the project is palpable, and it's a show I'd, frankly, pay money to watch. They spin the show's mythology in wonderful little twists and do for Batman what the TV show Smallville did for Superman. And the fan community went wild. Just check out the comments.

It was the brainstorming that really got me. Right there, in my ears, was a creative team imagining something, putting beats into the overall story arc, talking about where you'd end season one or season two, and just painting this tantalizing vision in broad strokes. Then, they went back and filled in some details before moving on to the next topic.

Man! That was exactly what I needed to hear. Shoot, I've listened to it twice, not only to absorb the how-to session of spitballing an idea, but to revel in the Bat-nerdism of these two men. Someone should seriously make this show. It's awesome.

So, in an unlikely source, I got a little taste of a creative team in a brainstorming session. It was exactly what I needed to hear and I've already started applying it's tenants to the series of novellas I'm writing. I'll be a better writer for it.

Now, if someone would only make that show….

What kind of out-of-left-field things help you along your writer way?
Posted by Scott D. Parker at 7:13 AM 1 comment:

Email ThisBlogThis!Share to TwitterShare to FacebookShare to Pinterest
Labels: the writing life, Writing

OK. Let's get this out of the way first.

The first story in the new Best American Mystery Stories first appeared in Needle, a magazine I edit. They also picked two other Needle stories -- one from Jen Conley and another from Timothy Friend -- as notables. And DSD-alum Dave White had one of his stories picked as an honorable, too.

So, if you wanted the full disclosure, there you go.

I've been reading BAMS collections for years. Just off the downtown mall in Charlottlesville, there's a used bookstore called Daedelus with stacks and stacks of books, piled along walls and stairs. At one time they had collections from the HMH Best American series, but then I bought them all.

When I'm reading a group of stories, whether an author's collection or a themed anthology, I don't want or expect the stories to be even. In an anthology, which is what we're looking at here, you have a couple dozen or so authors at various stages in their writing careers, crafting different types of stories, for hugely different markets. I can tell you without hesitation that Ellery Queen Mystery Magazine is highly unlikely to ever publish a story that runs in Needle: A Magazine of Noir. I mean, can you see a story from Thuglit on the cover of Mr. Hitchcock's? It would be like the time we took my drunk Aunt Ida (God rest her soul and that of her beloved iguana) to early dinner at the Sizzler and she punched the manager (clip-on bow tie, sweaty pits) in the throat because the rolls were cold.

I don't expect all the stories to mix. That's part of the fun.

One of the authors has a great deal of experience writing traditional mysteries. Nancy Pickard has won the Agatha, Anthony, Macavity, Shamus, and Barry awards. She knows mystery stories. Of course, so do the other authors. But not all of the stories are a Miss Marple mystery, which is something else I dig about this series.

Reviewers, while praising the collection, sometimes lament that the stories are more crime fiction than mystery. Now, this can vary with each year's editor, of course. Lisa Scottoline put together this year's great list, and you can read her thoughts in the essay in the front of the book. I usually skip over these intros, but in the BAMS books, they're on par with the stories themselves.

I don't expect the stories to have Hercule Poirot sitting in a cottage garden while he explains why the colonel's illegitimate nephew (who knew?!?) was the killer.

Of course I'm fond of Tom Barlow's "Smothered and Covered," as we chose it to run originally in Needle.

O'Neil De Noux's story, which ends up being about a thing the story wasn't about but was about all along, is a standout.

Stories by Nick Mamatatas, Joyce Carol Oates, and Michael Conley were also favorites, though every damn story in here was a pleasure to read.

Jen Conley's story, "Finn's Missing Sister," was named a notable for the collection, and it would have been cool if that had been included. When I first read it for Needle, it surprised me in many ways -- and I appreciate being surprised in fiction.

I should also mention Dave White's story, which appeared in Thomas Pluck's recent Lost Children anthology. Another good one you should track down. 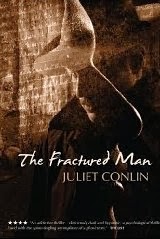 Posted by Brian Lindenmuth at 6:49 AM No comments:

I plan on getting lots of rest this week, because next week I will be at an incredible event that I have been lucky to attend in the past: Murder and Mayhem in Muskego.  And I won’t be alone.  There are more than 25 authors who will be speaking with readers, chatting on panels and holding workshops throughout the day.  They will also be ready, willing and able to sign books (which are available for purchase at the Muskego Library courtesy of Mystery One Bookstore) and basically answer any questions you might have.

Coffee will flow.  Lunch is served and a celebration of books will be had.

Yeah…it’s pretty awesome.  If you live anywhere in the area of Muskego, WI (which is not too far outside Milwaukee and a pretty quick ride from the Chicagoland area), this might be the event for you!  It is fun, friendly and a wonderful way to meet authors you love and authors that you haven’t heard of.

Oh – and this year the fabulous Marcia Clark (yep…you know that name from the OJ Simpson trial and will want to check out her books) will be attending.  I had the pleasure of meeting her about 2 months ago and she is well and truly fabulous.

If you are interested in attending – check out the website.  The registration form is there along with the list of authors, panels and other fun facts.  Honestly, it is a great event and I am incredibly honored to once again attend.

And in case you are wondering where else I’ll be in the upcoming months – here is a list of my shenanigans that I promise will be updated to my website soon!