Why I Wrote Pale Horses by Nate Southard


Pale Horses (paperback|kindle) is out today. This is one hell of a book folks. I invited Nate to tell us a bit about it. But first, here's the synopsis:


Most days, Sheriff Hal Kendrick can remember his wife’s name, but what frightens him are the days he can’t. When a local woman is found dead, naked and dumped on the banks of the Ohio River, Sheriff Kendrick is determined to solve the crime before Alzheimer’s disease destroys his ability to reason. No matter the cost, he will leave his county better than he found it, but murder is only the beginning, a spark that ignites a firestorm of violence, betrayal, and deceit.

Most mornings, former marine Korey Hunt can remember the previous night. Other times, he only remembers darkness. When a body is found on his family’s property, Korey wants to believe he’s incapable of murder. Deep down, however, killing is all he knows.

Death rides a Pale Horse, and no one in its path escapes unscathed.

My grandmother couldn’t find her purse.

I realize this isn’t the way you normally start explaining why you wrote a crime novel, but I do think it’s important.  See, the thing that made my grandmother’s inability to find her purse so distressing was that it was right beside her.  She’d placed it there a few moments before.  When she started freaking out about not knowing where it was, we thought maybe she was just strung out on anxiety.  My grandfather was in the hospital after a major heart attack, after all.

The next day, however, my grandmother couldn’t find her dentures.  Eventually, my brother found them in the refrigerator.  That afternoon, my grandmother went in to visit her husband and didn’t recognize him.  That was the wakeup call the family needed.  Doctors visits followed, and soon it was all but certain…my grandmother had Alzheimer’s. 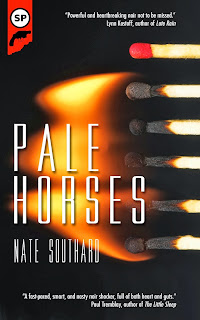 If you’ve never experienced a loved one’s battle with Alzheimer’s disease, it’s hard to understand.  I really don’t know how to describe the complete awfulness of it.  My grandmother, who had long been the kindest person I’ve ever known, changed quickly.  She went from forgetting things to thinking we were part of a terrible organization out to get her.  I remember her telling my grandfather, “You’re one of them, and I don’t trust you.”  Then she closed her eyes, and she never opened them again.  She lived for a few more years, first by being fed at the kitchen table and later by being fed through a tube.  She could still speak for at least the first year.  She never opened her eyes, though.  Not once that I recall.

All of this is a roundabout way of saying I wrote Pale Horses, a novel I consider not only my first crime story but also the best thing I’ve ever written, because I wanted to write about Alzheimer’s disease.  Normally, I focus on the horror genre.  It’s what I know, and it’s what I’m comfortable writing.  With Pale Horses, I thought I could confront this disease in a different way.  Because Alzheimer’s and what it does to a person is horrifying enough.  The idea that you want to continue living your life but that something is destroying you a moment at a time is the worst thing I can think of, and I wanted to create a story that reflected that.

There are other things in Pale Horses, of course.  You’ll see some post-traumatic stress disorder.  You’ll see meth and dead bodies and a version of southeastern Indiana that’s much worse than anything I ever experienced.  There’s a particularly creepy part of the story involving an old VHS tape full of Christina Ricci footage.

What I’m saying is…Pale Horses is a dark ride.  At times, it’s a fun ride, but it’s really dark.  It lives in the shadows where the crime and horror genres meet.  My hope is that it will crawl under your skin, that you’ll remember it long after you close the book.

So Pales Horses has arrived.  I hope you pick it up, and I hope you enjoy it.  Most of all, I hope it latches onto you and refuses to let go.  Some things should do that.
Posted by Brian Lindenmuth at 6:16 AM