I like action movies. Or I used to. A lot of the newer ones don't have the feel of the "classics," which for me began with First Blood. Based on the novel by David Morrell, it tells the tale of a Vietnam Vet trying to get home when a sheriff inadvertently starts a war with him. It is a character-driven novel, as most action tales are. What defines us better than our actions? It's difficult to be an unreliable narrator when you have little internal monologue. You can mask the motives for your actions, but as Andrew Vachss says, "behavior is the truth."

Look at Parker, the hardboiled favorite. From paragraph one, he's moving, like a shark. Someone offers him a ride, and Parker tells him to go to hell. On the way to a meet, someone blocks his way, Parker chops his throat and kills him. We know him from what he does; his job defines him.

That doesn't mean that without action you don't have character, but there is no reason to eschew action if you enjoy character-driven novels. And that was my mantra when writing BLADE OF DISHONOR, an action thriller hatched from an idea created with David Cranmer of Beat to a Pulp.

An MMA fighter. A treasured sword. And a ninja clan that had to have it. That is what we began with. What I ended up with was a young fighter named Reeves whose temper ended his career and sent him to war. When he comes home, he finds the last of his family, his grandfather, barely hanging on in a town devastated by the recession, and his old enemy in charge of things.

Grandpa Butch is a World War II vet who runs a pawn shop and Army surplus store. Reeves grew up in that iron playground, but there was one toy he couldn't touch: a Japanese sword that Butch brought home from the war, and would never talk about.

I did some research about Japanese swords after World War 2. Everyone knows a vet who has one, usually an officer's sword. But the most treasured Japanese blade of all, the Honjo Masamune, went missing in 1945. It was forged by Japan's most revered swordsmith, Masamune, and was passed down by the Tokugawa clan to the reigning shogun. But after the fires went out in Tokyo, a soldier took it home. And it has never been seen since.

That was a story I couldn't resist. I began the story in Minnesota, because I know the area and the people, and adventures need space to roam around in. A little more reading and I learned that the Devil's Brigade, the 1st Special Service Force, trained not far from there. They are the Nazi hunter commandos that Tarantino based Inglorious Basterds on, and their real stories have never been told. They would sent scouts into camps of SS soldiers on the Vosges line and slit the throats of every tenth man. And leave a sticker on his helmet that read "Das Dicke Ende Kommt Noch!" … the worst is yet to come.

If I'd made that up, it would be dismissed as hyperbole. And you're damn right the Devils are in the book. To me, a good thriller doesn't just make your heart race, you learn something. Hidden parts of history, or disturbing actions by terrorists or governments. Or in this book's case, all three. Did you know about Unit 731? You will.

You need big characters to make through big events. So I wrote big. Butch Sloane, the wheelchair-bound WW2 vet, based on my great-uncles who fought in the war. 'Rage Cage' Reeves, a hot-headed smartmouth based on all the MMA fighters I've sparred and slugged it out with at the gym. Tara, the hot-rodding ambulance driver, based on a number of fiery women in my life. And Miyamoto, the last samurai of a secretive brotherhood, fighting his sworn enemy: the yakuza assassins of the Black Dragon society, which pulp fanatics might recognize from novels set in the '30s, when Japan invaded China.

So when I say this book is about an MMA fighter caught in a battle between ninja and samurai over a stolen Japanese sword… I mean it's a character-driven novel. 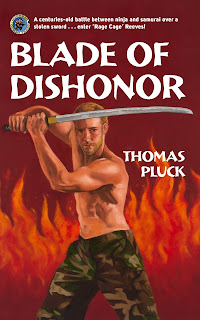