On being an aspiring writer

We've started a giveaway for COUNTRY HARDBALL in which you can get a signed ARC two months before the book is published. People have been awfully nice about getting the word out, and I appreciate that. I'd hug you if I could and/or if I didn't totally skeeve about touching you disgusting people. 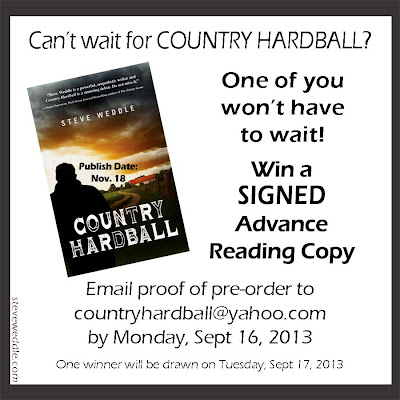 Pre-order as many copies as you like. Makes the perfect holiday/birthday/graduation/retirement present.

Also, I'm scheduled to chat with Alec Cizak for the KMSU Weekly Reader program. Cizak is the guy behind the wonderful Pulp Modern, by the way. Find out about his Manifesto Destination here.

We've seen the term, up there in Twitter IDs and Facebook Abouts. Some of us have laughed, "Ha. Don't aspire. Just write, silly."

Most writers are aspiring. Inspiring. Perspiring. Tiring. Etc. Some of that. All of that?

Some authors aspire to certain things.

For example, I've seen writers tweet about how they aspire to a better stage position at a conference. Better signing tables at conventions. A panel with JK Rowling instead of @author_dan261. I suppose that's a certain type of aspiration. Aspiring to the best table, signing booth, parking spot at BookFabCon2013. Those authors want to be seen as more important, I guess. It makes a great deal of difference to them what other folks think, how they're seen. Respect. They have a thing they wrote and they want it to sell. They aspire to be a Staff Pick at Warehouse Books Inc and so forth. Great. That's one kind of aspiring writer. You aspire to get an agent. Then a deal. Then good reviews. Then on all the lists. Then on the best panels. Movie deals. Cocaine with that guy who made those 1980s movies. Awards.

If you're a writer who is aspiring, I figure that's a good thing, right? You want more? You want to push yourself?

Have you ever noticed that the New York Times Book Review Podcast refers to authors in a couple of different ways? If you listen to them talk about a Big Six (or five) best-selling author, then they'll say -- "Coming in at the third spot is Marc Mahonor." If the author is second on the list and happens to be self-published (GASP!), then they will say, "a writer named Marc Mahonor." It's weird. Maybe some authors aspire to be referred to as just their names, as opposed to "a writer named" something or other.

Other authors aspire to do something with their notoriety. Anton Strout, for example, has this promotion to, sure, help sell books, but also to help the Worldbuilders charity. He and his publisher are donating a dollar (each) for every pre-order. (Up to $1,500.)

We can aspire to be better at our craft, but also at all the other stuff we do. The not-being a dick, the supporting the good causes, the promoting of the good books and authors.

The more I think about it, the more "aspiring" sounds good. Aspiring writer. Aspiring baseball fan. Aspiring parent and spouse. Steve Weddle, aspiring human.
Posted by Steve Weddle at 3:00 AM

Well put. When I considered not writing anymore, then re-considered and kept at it, I re-evaluated my entire concept of what it meant to be "successful." So, basically, I'm now aspiring to write as well as i can, while remaining as happy as I can, and, hopefully, making the people around me a little happier than they would be otherwise.

I know what you mean. If you're focused on obtaining external stuff, you're always going to be looking for that next level.

You get a signing table at a con, but it's not In The Front or you're on a panel at 9 and the best panels are at 11. Or your book got a great review in the Washington Post but you wanted the LA Times.