Moving Mountains in a Shared World

Many say they’d sacrifice themselves for the ultimate truth, but who is prepared to die for a great lie to save the lives of others?

That's the hook for my newest work, and greatest departure from all my works to date... And I can finally share some of the details about this journey.

A few months ago, I received an invitation to participate in the launch of Kindle Worlds. While it's billed (by some) as a fan fiction system that allows writers to earn money for their efforts, it's really more of a shared worlds system. The rights holders (original creators) earn profits from every work published, along with the new writers, and it's publication with permission, so you're not imposing on someone's baby without their consent.

As an author, those things were important to me. When I received the invitation, I really had to debate whether or not this was the right thing for me. Since consents were in place, I felt comfortable considering the option, but what I wasn't sure about was whether or not I had the time and information needed to step into another world. The Foreworld Saga is immensely popular, and the prospect of stepping into that series was daunting.

However, Foreworld covers a large span of time periods, multiple characters, and story arcs. This gave me the opportunity to take the core elements of Foreworld and bring new characters into the mix. The result is described as follows: 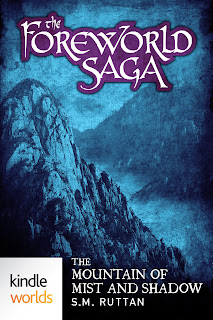 A historical drama of the highest order, S.M. Ruttan’s The Mountain of Mist and Shadow is set in ancient times. The world has not yet turned to Christianity, and the mighty Caesar is still fighting the rising tide of martyrs that have converted to the growing religion. Two allied groups, the Shield-Brethren and Shield-Maidens in the south have unexpectedly reconnected to similar orders in the north. A seer from the north arrives in the south, with artifacts stolen from the Romans -- precious items that may or may not disprove some claims of the Christian martyrs. The Council of Seers has already been shown the bloody future of the peoples they live amongst, and knows that if they do not arm and defend their order, they will soon succumb to the imperial Empire. They split their congregation into two groups and set out on the deadliest of journeys, determined to rebuild their order in hiding, far from the reaches of Caesar, while harbouring the invaluable secret articles the Romans desire. Can they make it to safety before the greatest army in the history of mankind hunts their people down?

I can't even begin to express how nervous I was about stepping outside my genre, outside my contemporary settings, and immersing myself into a popular series. I was concerned that people might not realize at first that this doesn't connect to my prior works, which is why I've used S.M. Ruttan as the author name, but I think the description probably eliminates any confusion.

The result has been a major accomplishment for me - a first: my first #1 ranking on Amazon.

And the very best thing of all? My stepson's had a long-standing interest in The Foreworld Saga, and being connected to it has really upped my cool factor. No ranking in the world can beat impressing him.

This is just great, Sandra. Congrats!

Thanks Scott and Patty - yes, it's gratifying. It was especially hard to keep quiet when the news about Kindle Worlds went public, but we were still bound by confidentiality. Lots of questions that had to be kept on the shelf for people wondering how this would all work...