‘When I thought about it, my most vivid and powerful memories of childhood were in black and white. The monochrome serials that were shown at the Saturday morning Kidz-Klub at the local Odeon Cinema, and the Hollywood films on afternoon television when I was throwing a sickie from school, all seemed so much more vibrant than anything that real life could come up with. And, as you would expect of someone who grew up living more fully in his imagination than in the day-to-day, adulthood proved to be a series of disappointments and non-events.
Nightclubs, for example, were, in my mind, bustling with tough guys in pinstriped suits, wise-cracking cigarettes girls and sultry Femme Fatales belting out torch songs on a Chiaroscuro lit stage. So, when I eventually stumbled into the grim reality – claggy carpets, overflowing toilets, beer-bellied men staggering around a dance floor with leathery, bottle blondes, well, my heart sank like the Titanic.’

From Gumshoe by Paul D. Brazill. 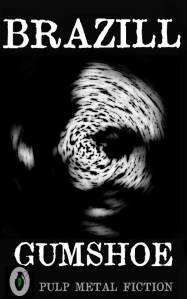 When the late great Quentin Crisp first arrived in New York – a city he eventually made his home- he immediately fell in love with the place and enthused that it was  ‘just like the movies’- something that could he could never say about Blighty, it seems.

But life rarely is ‘like the movies’ – and so much the worse for life. And also for Albert Finny in Stephen Frears’ smashing film Gumshoe - based on the book by Nevil Shute. Gumshoe is a the story of a slightly cracked bingo caller in the north of England who is in love with Philip Marlowe and Sam Spade and in particular their cinematic incarnations embodied by Humphrey Bogart.

Or there’s the eczema riddled pulp fiction writer in Dennis Potter’s brilliant and nasty The Singing Detective – escaping from painful reality into a delirium where he is the protagonist of his novels. Or Keith Waterhouse’s Billy Liar and his recurring fantasies of  a land known as Ambrosia, which is far and away from him hum-drum life.

And there’s Peter Ord, protagonist of my own Gumshoe. Darren Sant put it best:

‘Following the breakdown of his marriage, in a booze addled flash of inspiration, Peter Ord decides to become a private investigator. However, is Seatown ready for him? More to the point is he ready for the Seatown’s cast of ne’er do wells, gangsters and lunatics? Peter must tackle many challenging cases, including one involving a legless crooner, and when he comes under the radar of local crime lord Jack Martin, has he bitten off more than he can chew? With sidekicks like hack Bryn Laden failure is not an option it’s compulsory.’

If that tickles your fancy, Gumshoe is published by Pulp Metal Fiction and available from Amazon, Amazon UK & Smashwords.

What you say really comes across Paul (I must get that review up soon!!). Billy Liar came in there as a flavour, but the strongest fell I had was Albert Finney as on screen. I thoroughly enjoyed the wordplay and the plot twists and would like to recommend it to anyone who has read this and is wavering - press the buy now buttone! You won't regret it.

Cheers Nigel. Glad you enjoyed it.

Thanks to Jay and the DSDers for letting me crash on your sofa.

Gumshoe is a great book full of Paul's trademark delivery.