or Jack Vance was an Edgar winner too!

A giant of American genre fiction, Jack Vance, has died.

Vance is well known for his science fiction and fantasy works. He arguably invented the dying earth sub-genre and influenced generations of science fantasy writers, without Vance you don't have Gene Wolfe for example. The style of magic he developed in his fiction would be one of the prime influences on Advanced Dungeons & Dragons (pdf) (gamers began to refer to it as Vancian Magic).

He was an accomplished musician, a merchant marine, a traveler. You name it and he did it. And did it damn well too.

So Vance's SF/F bonafides are solid. But the man won an Edgar for Best First Novel in 1962 dammit and deserves to be recognized by this community too. That's what I want to briefly focus on today, Jack Vance's contributions to the mystery genre. 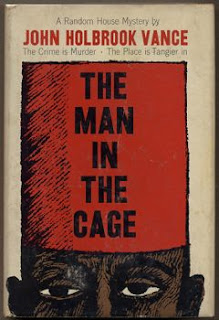 Here's a synopsis for The Man in the Cage:

Junketing around the Mediterranean in petty smuggling operations, Noel Hutson liked to think of himself as a gallant adventurer. But in the middle of a North African desert kasbah, with a truckload of contraband, the American feels less and less like a swashbuckling hero. Forced to reload his truck with a very suspicious cargo, he writes to his family asking for help. Noel disappears, and his brother Darrell comes to find him. Darrell's search takes him to the ancient city of Fez, and into the desert- along the way meeting fanatics, beautiful women, and villains. An exciting suspense novel about an American making his way through a restless society of smuggling, murder, and North African politics.


The Man in the Cage is available on the Kindle for $5.99

Thriller was an anthology series of thriller and suspense stories that ran from 1960-1962.  The Man in the Cage was adapted for a season 1 episode of the show. The full episode is embedded below.

The four of them had only two things in common - their name and a love for the ladies. John Boce was a no-account accountant who lusted after food, drink cars, and women. John Thompson was a secretive librarian who liked his books and his women well-stacked. John Viviano was a fashion photographer with a great feel for a body - any body! And John Pilgrim was a poetic bum who had the girls hanging on his every stanza. All of them wanted the same woman, but which one wanted her enough to kill...? 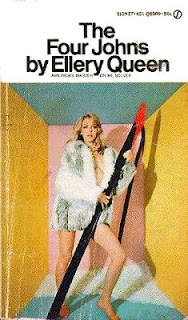 How could a man have been murdered when he was found alone in his study, a gun in his hand, and the door locked from the inside? It had to be suicide, the police figured, for although there was no suicide note there was a letter proving conclusively that Roland Nelson, over the last several months, was being blackmailed. But to his daughter, Ann, whom he had seen only spasmodically since he had left her mother when Ann was a baby, there were unanswered questions. She was convinced that her father could never have killed himself. Before she found the answers, two people were brutally garroted with a wire, one of them in her own apartment. Could she fins all the answers before the killer silenced her, too? 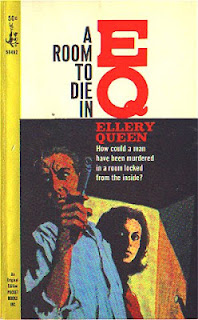 Madman or murderer? That was the question and it was Police Inspector Omar Collins who had come up with the answer. All he had to go on was: the victim - Earl Genneman, wealthy president of Genneman Labs; the scene- right in the middle of a busy state park; the murder weapon - a shotgun that was still missing; the witnesses - Myron Retwig, Red Kershaw, Bob Vega, and Buck James, all friends or employees of the deceased; the motive - unknown; the suspects - everyone!  Then he got a lukewarm tip from a real cool corpse, and a few clues started to click into place. But it wasn't till the third party turned up that the inspector was sure he was hot on the killer's trail. And by then, Collins knew he had very little time left to stop his madman from murdering again...!

At first it seemed as though only the Madman Theory could explain the brutal shotgun slaying which lay in wait for the friendly group of back-packing hikers. But Inspector Omar Collins, lean, gloomy-eyed, black-haired, was a painstaking man.The more he pursued it, the less he believed in the Madman Theory. 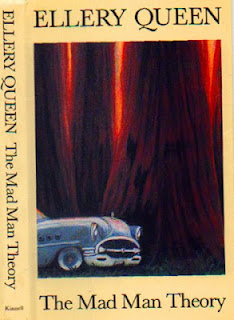 Of his EQ novels Vance said "...Ellery Queen gave me a flat fee of 3000 dollars for each book. Which was then a lot of money! I did have to sign a contract never to reveal I actually wrote the books. Theoretically I never took his name. In a way he took my good proze and did everything to let it pass as his own.". Vance refered to his EQ novels as being "tarted up".

There was at least one other EQ novel that remained unpublished until the manuscripts inclusion in the Vance Integral Edition.  You can read about it here (pdf). 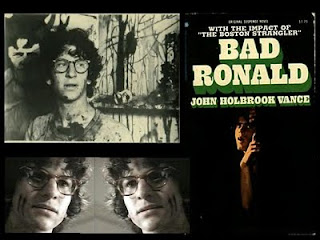 Vance wrote two novels with recurring character Sheriff Joe Bain, The Fox Valley Murders (1966) and The Pleasant Grove Murders (1967), that are set in a fictitious county in rural northern California. 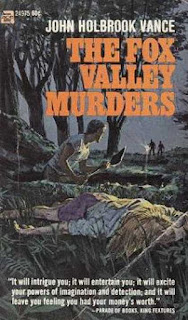 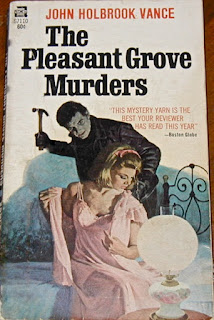 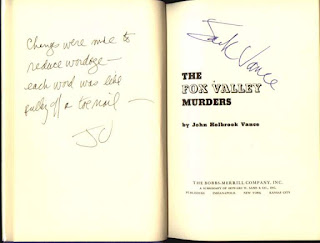 “I like regionalism in American detective stories, and I really enjoy reading about the problems of a rural country sheriff…and I bless John Holbrook Vance for the best job of satisfying these tastes with his wonderful tales of Sheriff Joe Bain…All very sound, real and enjoyable.”


Subterranean Press recently reissued some of Vance's mystery novels. Dangerous Ways collects The Man in the Cage, Bad Ronald, and The Deadly Isles.  The second collection, Desperate Days, collects The Fox Valley Murders, The Pleasant Grove Murders, and The Dark Ocean. Both collections were limited editions but are worth the time to seek out.

Other links of interest:

Critical look at Vance and his writing style

Here's a brief overview of Jack Vance's SF/F work from 2000 and a more in depth one
Posted by Brian Lindenmuth at 3:00 AM

Loved all the book covers here--a treasure-trove of vintage artwork. Thanks Brian.
Anonymous-9