Most PI characters have a code, whether it’s stated outright or implied by the character’s actions.

There are lines Spenser would never cross. Marlowe gets damned preachy about it. Hammer’s even more physical, using his fists to emphasize his point. The PI story is often about what the protagonist believes. 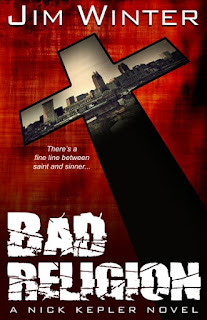 Bad Religion is more about the protag questioning what he believes. For starters, if you read Second Hand Goods (and if you haven’t, it’s $2.99 on most ereaders. Go. Now. I’ll wait.), you know that Nick and his married secretary Elaine had a fear-driven one-night stand. As Bad Religion begins, Nick is already pondering if that was the mistake they told each other it was or something more. What prompts Elaine to start dangling the forbidden fruit once more, aside from her crumbling marriage, is an opportunity for them to leave their patrons at TTG Insurance for an office of their own.

Nick says no when he realizes a Russian mobster with delusions of legitimacy is the money man behind the potential new client. Nick refuses to “sell his soul to the devil,” only to learn that a criminal with his own set of rules is not the worst person to do business with.

And then there’s the case itself, an associate pastor of a popular suburban church accused of skimming the collection plate. As Nick and Elaine dig into church politics and shady real estate deal, Nick is forced to face that pesky God issue he’s ignored since he was a teenager. Nick was never the most devout Catholic and never embraced atheism, but he is forced to define himself as he watches two reverends – one genuine and humble, the other a preening huckster – struggle with their own beliefs. True to his ambiguous nature, Nick doesn’t really resolve the issue.

In the end, Nick is left wondering what the hell happened. He knows even less about what he believes and has crossed lines he would never have dreamed of even days before the story begins.

About the only thing he believes in at the end is guilt.

He doesn’t need God for that. He’s racked up enough of it on his own.

Kindle | Nook | Smashwords
Posted by Steve Weddle at 3:00 AM

I'm looking forward to this. I enjoyed the ambiguities Kepler faced in THE COMPLEAT KEPLER. I'll be sure to check out both BAD RELIGION and SECOND HAND GOODS.