Writing With a Template 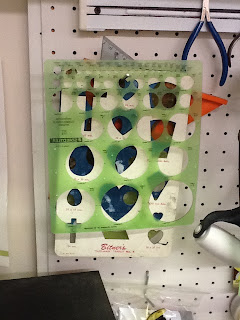 My wife is a jewelry artist who markets herself under the name Betoj Designs. Her studio is filled with all the tools of her trade: saws, torches, kilns, and many, many sharp pointed things. On her wall are dozens of templates, those plastic and/or metal things with shapes cut out so she can always make sure her circle or star or whatever is exactly correct. It helps her create the beautiful things she does, but it doesn’t actually do the  work for her.

If you are like me, you might occasionally find yourself in a writing slump. It happens, or, at least it does for me, a person who writes technically by day and doesn’t always write as much as fictionally as he should at night. While there are no good reasons why not to write, being an avid reader is the one thing I’ll lay at the throne of King Why I Don’t Write. I’ve been on a reading tear in recent weeks, plowing though old Alan Dean Foster books, new space opera books by James S. A. Corey, and even re-reading Erle Stanley Gardner’s Top of the Heap this past week.

Another book I’m reading is the new Doc Savage book, Skull Island. In case you don’t recognize that name, it’s where King Kong lives. Seriously, the book had me at “Doc Savage meets King Kong.” How could I not read that. And, so far, it’s pretty darn fun.

When you start talking about Lester Dent, the prolific author who created Savage, you invariably get to his Master Fiction Plot, his formula for writing a 6,000-word pulp story. It’s all over the internet, but here’s where I first found it. In many ways, Dent’s formula is an earlier version of Larry’s Brooks’s Story Engineering. Like a blueprint, Dent’s little essay is a way to build a foundation of a story, but it does not tell you how to construct one. That’s up to the writer.

Now, I know what you are saying: Scott, all you’re really talking about is an outline. Yes, I am, but one with a slightly different angle. You see, when I’ve tried to outline a story, I do it from the traditional outline look at feel, complete with Roman numerals and capital letters. That didn’t always work for me.

So, last weekend, I tried something. I combined the two things together. I took an 11 x 14-in. piece of paper and folded it, leaving me with essentially two 8 ½ x 11-in. side by side. Eyeballing it, I then created four columns of roughly equal size. Then, I printed and cut out Dent’s formula. He does the standard 4-part story structure, each section containing 1500 words, where the midpoint comes at the end of Act II and the huge cliffhanger comes at the end of Act III. I took those pieces of paper and taped them on the sheet, one in each section.


That’s all well and good, but the “outline” part was still the big white areas at the foot of each little mini column. How to create the outline? Well, I took a page from Michael Moorcock, who himself used the Dent model. Moorcock scaled up Dent’s formula to a 60,000-word novel. Here, Moorcock divided each 15,000-word section down into six chapters.

Bingo! I decided that each of my main four sections would have six sub-sections. Thus, I penciled in the letters “A” through “F” in the white spaces below the taped Dent words. And, viola! I had a template on which I could structure a story. 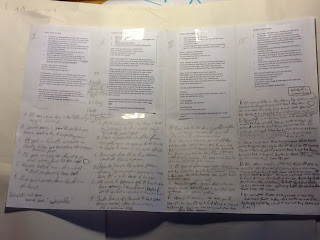 Truth be told, it worked pretty easily. I wrote in pencil and started in section I-A with the image I have had in my head for a time: a Houston PI, circa 1941, knocking on a door of a house in a neighborhood...and bullets erupting from inside. I was able to craft the entire story in a sitting or two. With the larger piece of paper, I was really like having a blueprint in front of me.

Will this work for every, single story? Of course not. But if you need to get off the snide and start working on story that you actually create yourself, this is a nice boost to get you started. More importantly, it felt good to be creative again, no matter how I got there.

Are there any tips and tricks you know to prompt your story ideas?

P.S., Today is Free Comic Book Day. Head on over to your favorite comic store and find some titles you might like. I'm hoping they'll have a Grimm comic available.

I have doing something similar. I combine Dent's outline and Brook's structure with Blake Snyder's Beat Sheet breakdown (from Save the Cat).

I have found Snyder's Five Step Finale for the final Act a good template for short stories (after hitting the hero with the problem). I have wondered if I couldn't use it four time for a complete novel.

Mr. Jenkins, I am not familiar with Blake Snyder, but I have done a bit of searching and found the beat sheet. Thank you for the additional help. I am going to study Snyder's formula as well.

BTW, have you found success with writing stories with your formula?

Some success, although my problems don't stem from the structure or outline. In fact, the Five Step Finale is helping me finish the short story I am writing now. It gives me that general direction to go without making it a detailed map.

BTW, call me Loyd. Mr. Jenkins makes me feel older than I am. /grin/

I use a writing template for all of my freelance work. I finally decided to use it on the novella I'm working on and I'm amazed at how efficiently I'm working. I outlined the story when I first started and then I decide on the details the day before I start writing. That way, everything materializes in my head and I'm just bursting to write it all down. I agree, templates are not for every story, but it's a good idea for many!