Learn How To Fail

Wow, Thursday creeps up quick. Here I was, watching the finale of VERONICA MARS season two, when I realised I was halfway through my DSD day. So here's another from the vault, and let's pretend I didn't forget, okay?

Not for the first time, my day has been changed by reading something that the mighty Chuck Wendig has written. His words will tip your head over onto your ass.  He posted on the subject of a meme that's doing the rounds on the facebook, and (whilst I'm in full agreement with him on the issue) It was inspiring a long reply from me. But hey, why post a reply on Terrible Minds when I had a post to write? Cheers, Chuck!
And sure, some of my thoughts will overlap with things he's already said. But when he says them he has a beard, and when I say them I have an English accent, I speak with the full authority of William Shakespeare and Alan Rickman. To be or not to be thrown off the Nakatomi building. I might be rambling, have you noticed? Anyway. Here's the meme that Chuck points to- 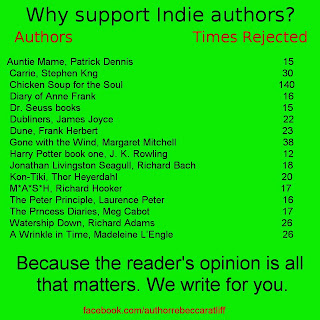 I'm not here to weigh in on the whole "indie author" thing -nor to try and grapple with what that phrase actually means- because I think it's a silly conversation. And that's not a dig at Wendig, he agrees on that too, I believe. And I'm not here to point out that the meme disproves it's own position. No, I'm here to weigh in on rejection. Did I miss a memo? When did this become a bad thing?
One of my worries with the ease of publication in the modern age is that we're beginning to think that rejection is a step to be avoided. An inconvenience that we can all sidestep at the touch of a button. On this very subject Paul Cornell once wrote; "a boxer doesn't learn to fight by avoiding getting punched in the face." Show me a comedian who has never faced rejection and I'll show you one who has never told a joke. We learn to succeed by failing. We learn to walk by falling over often enough that we learn to miss the ground. Looking at that list, the easiest thing in the world is to say, "pfffft, 22 people didn't know what the hell they were talking about when James Joyce showed them his work." But the honest professional writer looks at that list and thinks, "I wonder what state Dubliners was in for those first 22 submissions."
Here's the (open) dirty secret in writing; You don't sit down and write a good book. You sit down and fail at writing a good book. You show your work to people, you take criticism, and then you fail better. The first person to whom I showed a completed first draft of Old Gold told me exactly what was wrong with it. (I won't name names, but he was an agent and novelist, and has recently added publisher to that list, and also is Scottish. And may or may not be named Allan.) After seeing a sample of the book he lead off with a compliment, "the writing is, on the whole, excellent." That got my ego up and told me what I already knew- I had written the best book of all time. But after luring me in with the praise he gave me a list of all the ways the book failed. (The word "failed," wasn't used, but only because he was being polite.) After another edit, and after many of those problems were fixed, he gave me another list. This one contained one of the most important pieces of criticism I've ever received, "if you want people to read it, you need to learn formatting." He had to explain to me some very basic conventions of formatting a book. Until that moment I hadn't realised I was using my learning difficulty as an excuse- my brain doesn't do certain things and therefore I had decided I should get a free pass on them.

Nuh uh.
The first short story I placed online at a crime fiction webzine was one that had already been rejected twice. Not because the first two people were idiots, but because the story wasn't ready. On the third attempt, and with some additional editing input from Elaine Ash, the story got an award nomination and saw me wind up in a print anthology beside Rankin, Guthrie and Banks. Professor Weddle rejected a story of mine for Needle, and he was right- it wasn't a very good short story. It's now the first few chapters of my third Eoin Miller novel.
Hearing, "no," in any of it's forms is not pleasant. It's not a happy experience. But it's also vital. The meme above seeks to rob us all of this. It states that, "the readers opinion is all that matters," and suggests that each of the numbers in the list represents a failure of taste or decency. I look at each of those numbers in the list and see opinions that may well have helped the author, or strengthened to book. Even if it was an opinion that wasn't taken on board (because we each develop a sense of when to listen and when to hold firm) it's still a test, a moment that has helped the story stand on it's own to feet either through change or resilience*.
It would be lovely to sidestep all of this. It would be nice to sit and write thousands of words then simply walk away from them and call it finished. It would be lovely, but it wouldn't be writing. The above meme is really advocating not trying. I give out writing advice as rarely as I can get away with, but here's one that I think needs to be said; If you want to be a writer, you need rejection. You need to fail. Only then can you fail better.
*I'm pretty sure the list is wrong. As far as I know it's a total misrepresentation of the publication of The Diary Of Anne Frank. Though it would be odd to think -even after everything I've just said- of 16 editors saying that the book lacked drama and tension.

Jay, that's really kind of you to mention my small direction for your story. Wish you had mentioned the title so I could pull it from my memory bank and add to the narrative here. You're so right about failing. In fact, I'd go so far as to say, "If you're not failing, you're not trying."
Best regards,
Elaine Ash

Hi Elaine. The story was THE HARD SELL, which you prodded around a bit but massively improved.