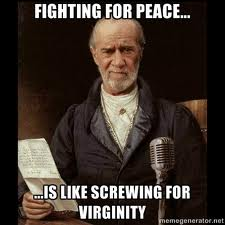 Yeah, what George said. Though I have a feeling he used a different word sometimes...

Maybe something’s in the zeitgeist because as I was writing this post on the weekend my friend, Adrian McKinty, posted about the same things I was going to say and said it a lot better than I can in a post titled, 15Things I’d Like to Ban from Contemporary Crime Fiction.
One of the biggest problems, as Adrian says, is, “The violence. Especially violence towards women and children...It's almost impossible to read some of this stuff and it makes me wonder how and why these authors ended up writing it.”
Oh right, of course, we’re all trying to show how awful it is. As if there’s someone reading the books who isn’t sure and needs to be convinced that horrific violence against women and children (and men, there’s plenty of violence against men, too) is terrible. Convinced in great, gory detail. Again and again.
Are we fighting for peace here by fucking for virginity?
Another point Adrian brings up is that, “There's an entirely fallacious belief out there that gets repeated all the time (I heard JJ Abrams repeating it on TV not ten minutes ago) that a hero is only as good as the villain is bad. The hero is supposedly 'defined by the villain.' This is utter nonsense.”
Yes, it’s nonsense. The greatest lesson from the 20th century, I think, and the one we insist on ignoring no matter how many times we see it repeated, is Hannah Arendt’s brilliant insight on, “The Banality of Evil.”
We see it again and again in the cruelty of real-life serial killers. We saw it again last week in Cleveland. Nothing brilliant, just banal. And evil.
Adrian proposed the 15 things he’d like to ban, a kind of Dogme 95 for crime writers and it’s certainly worth thinking about.
I will only add one thing, not something I’d like to ban but something I’d like to see more of, something that gets repeated so often it has become a trite cliche but the older I get the more important it seems.
Don’t pander. Don’t be afraid to offend. Don’t go for the widest possible audience. Write what’s meaningful to you. Treat it as your only chance to say something you think is really important and needs to be said.
Last week I had the chance to read the pilot script for a TV show commissioned by a Canadian network about a cop-turned-professor who specializes in serial killers (loosely based on a true story, in fact). Of course, the script had a scene in which a beautiful young woman’s dead body is found in a dumpster and I stopped reading at that point and wondered how many beautiful young women on TV, in the movies and in books have been thrown out like the trash.
Hell, I’ve written that scene myself.
And who knows, I may write it again someday and I’ll convince myself – yet again – that it needs to be in the story, that it’s important, that... that I’m not just fucking for virginity. 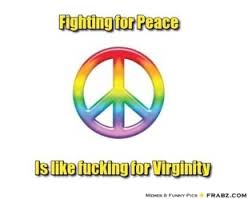 Thanks for posting this. I was away for the weekend and didn't see Adrian's pots until last night, by which time the comments had pretty much run their course.

I agree with both of you completely. I wrote one "serial killer who preys on women" novel, did my best to make it not really be about that, and it's still my least favorite finished work. (Doesn't mean I won't bring it out for Kindle some day. What do know about what makes a good book?)

To me, the banality of evil is far scarier than the diabolical villain, The hero not only has less to go on, but is always subject to being accused of overreacting. ("Aren't you making too much of this, Edgar? It's just a dead cat.")

What I'd place a moratorium on are stories where the hero is battling personal demons, especially alcohol. These too often devolve into a series of "will he drink?" episodes. I'd much rather read, and write, stories about how crime wears down good, conscientious people, and what may become of them because of it.

As much as I'm in agreement with most of the list (not all,) and wrote on here recently about how much i hate the way victims are treated in crime fiction, we also need to remember that DOGME 95 became about finding ways to break those rules almost as soon as the rules were laid down. Then as with all film movements it became just an empty title to throw around at things that looked KINDA right.

So I propose just two rules.

I think as long as we stick to those, we can't go wrong. And when we deviate from them -such as the many serial killer or murder mystery novels that may as well be fantasy novels- we've run out of truth to tell.

I'll admit, Jay, I'm less interested in violence and death as entertainment then I once was. Maybe it's part of getting old.

But I remember sitting in a movie theatre watching DEATH WISH and wondering, did the camera need to linger quite so much on that rape scene? Was the filmmaker worried I wouldn't find it horrific enough?

And then years later I sat through PULP FICTION with an audience full of giggling teenage boys and I thought, this movie is giving matches to kids to play with.

Oh, I don't think movies or video games make young men violent, I think young men are plenty prone to violence on their own and there are huge industries that profit off that.

I just think when choose to try and entertain someone by telling them a story full of violence and vengeance - instead of a story full of anything else - we have to make an effort to understand the emotions we're playing on.

There's a famous George Lucas quote that goes something like, "It's easy to make an audience cry - show them a puppy and then kill the puppy."

Sure, it works, and I guess if it ain't broke, don't fix it. But I guess I'm also starting to understand why publishers say that men over fifty don't read novels. Since I turned fifty... ;).

I'm on board with Jay's and John's comments alike. I like Charles Bronson, but the DEATH WISH movies are, to me, the weakest segment of his career. As for PULP FICTION, I've been all over the map on how I feel about it, though one thing remains the same: the scene where Vincent Vega accidentally kills the guy in the car is not funny; it always made my skin crawl to see it played that way. This leads me to another personal conundrum: the scene with Harvey Keitel as Winston Wolf may be my favorite in the movie. (Well, maybe second, after Christopher Walken and the watch.)

As for men over fifty not reading novels, given what we're talking about here, part of the reason may be it gets harder to find novels men of a certain age and discernment care to read.