Viva Riva!, How to Steal 2 Million, and African crime films

Over at Spinetingler (and Twiter and Crime Factory) the Nerd of Noir is the resident crime movie god. He's usually on the bleeding edge of what's out there, particularly when it comes to crime films from other countries (Jed Ayres is great with this too). I think I may have him beat on this one (but probably not). 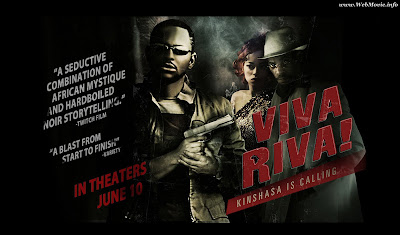 Riva is a young criminal who has stolen a large shipment of gasoline from the wrong people. This simple thing is one of the many things that appeal about Viva Riva! We see many crime stories with guns, drugs, and money. But the commodity that is most needed here is gas. Riva has it and everyone wants it. But really that want is need. They want it and they need it.

As the story progresses it widens greatly in scope with folks from different strata wanting in. The military, organized crime, even the church will all be involved in some capacity by the end. Is the entire world of Viva Riva! corrupt? I don't think this is entirely true, but they are so in need that desperation does permeate many of the decisions that these characters make. So in that respect Viva Riva! does follow in the footsteps of some of the great crime fiction stories where location is central to the story.

Just a quick side not that with Nora we have a great modern addition to the femme fatale hall of fame.

I've got to be honest. I haven't been this excited about a foreign crime flick since that run of late 80's to early 90's John Woo movies.

Viva Riva! is streaming now on Netflix and I urge everyone to give it a try.

Written African crime fiction has been on the rise for the last couple of years. I can only hope that with Viva Riva! and the South African crime movie How to Steal 2 Million (synopsis and trailer below) we are at the start of a new wave of African crime films.

Five long years...that's how long Jack (Menzi Ngubane) spent in prison after getting pinched for robbery. His partner in crime and best friend, Twala, never got caught and Jack never talked. But Twala proved as treacherous as Jack is honourable by marrying Jack's former fiancée Kim during his prison term.


Upon being released Jack decides to go straight. He wants to start a construction business, but after being rejected for a loan he must find a new source of capital. An opportunity presents itself when Twala suggests they do a home invasion with a take worth R2 million. The complication is that the mark is Twala's father, Julius. In his search for a third partner Jack comes across the tough, but sexy Olive.


When the robbery goes wrong secret double crosses are revealed. Twala never intended to split the money with Jack and has planned to kill him all along. As Julius edges closer to finding out who ripped him off and the pressure mounts on the three accomplices the tension builds towards an explosive and surprising finale.


So how about it, you ready for some African crime films? Are there any others I should be aware of?
Posted by Brian Lindenmuth at 4:00 AM

I recommend Gangster's Paradise: Jerusalema. It might be listed as just Jerusalema. It is set in Johannesurg, South Africa and follows Lucky Kunene from childhood as a car jacker through his rise and fall as a crime lord. Very good.

Ahhh, ya got me. I will check this out. Jerusalema seconded - based on a real gangster who died before the film was released. The scenes of them taking over abandoned buildings are supposed to be staged exactly the way it really went down - pretty fascinating.

Brian, thanks for your positive comments about Viva Riva! I work for the US distributor of the film. We actually distribute many excellent international crime films. Would Do Some Damage be interested in some free digital downloads of this film to offer your readers? If so, please contact me. Best, Brian (bandreotti@musicboxfilms.com)