I've been on a run of deep, moody or depressing posts lately. Also I've been hustling to sell my book. Something a bit lighter and easier to digest  this week.

I've been told many times to watch Veronica Mars. It's one of those shows that's been talked about around me so often that sometimes I've even begun to think I had watched it, and had opinions on it. A few people have assumed that one of the characters in my books is named after her. After all the hoohah about the kickstarter campaign, I decided it was time to finally sit and watch some of it. I bought the first season through itunes, and a few days later I'd watched the whole thing. 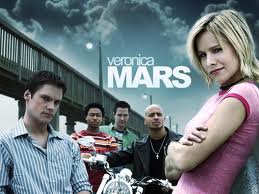 Man, what a fun show. It's clever and witty and it does one of the most important things in mystery fiction -it makes you give a shit. It strikes me that the difference between good mystery fiction and bad mystery fiction isn't how clever or simple the central mystery is, nor how sharp the writer seems to be. It all rests in whether or not you care about the characters.

I guess at the time it came out I was done with school drama. I finished High School in the 90's, and then I'd had fun watching the early seasons of Buffy to remember the hell I'd just escaped from. But my tastes in fiction and music were gravitating older, and I wanted to read about adult lives. When Brick came out I tried to like it -and I can certainly admire a lot of the craft that went into it- but I wasn't engaged by the concept and the attempt to force a 1940's film paradigm into a modern high school. It worked for many people, but not for me.

But it seems that 32 is the right age to have tried this, because I've grown past most of my baggage and tend not to pre-judge as much as would have done in the past.

Veronica Mars herself was a great character. Fresh and "sassy," (as I think you have to refer to young female characters who are allowed to have a mouth) and managing to be an interesting and well-rounded teenage character without having to be "kick ass." Her supporting cast each had more than one degree to them -if some were allowed to be deeper than others- and I was sold on the reality of the show. Not that the show was real, but that the reality of the show worked.

And I loved her relationship with her father. I loved that she was allowed to have a relationship with a father. It was great to see a drama show -a crime drama show- that was willing to let a dad just be a dad, and to clearly have fun being a dad, and be simple and loyal and very good at his job. Maybe so much of our fiction is driven by parental issues that we sometimes forget to step back and tell the other story. And especially fathers. Sure, there are a million and one shitty dads in the world, but there are far more who are great parents.

The plotting was also very impressive and assured. It touched on some very interesting modern social issues with a well-judged grace -I'm thinking the episode Meet John Smith- and it managed to spread out a mystery over 22 episodes. Even the 'filler' episodes were not really filler, as pieces of information were constantly being revealed in both subtle and obvious ways to make the final episode all make sense. Nothing felt like it was thrown in at the last minute. I liked the way we would learn something about a characters violent or emotional state that would then pay of several episodes later, that clues could be hidden in plain sight, and that all of the reveals felt obvious after the fact.

I liked that Veronica and Wallace were allowed to be teenagers who simply had an easy going friendship, with no need to throw any extra angst in there simply because they're male and female. I liked that it never tried to treat the viewer like a fool, even when trying to fool us.

I think I kinda fell in love with this show, maybe just a little.
Now I need to wait until payday before I can download season 2.

I've never seen VERONICA MARS, but I feel much the same way about CASTLE. The beloved Spouse and I "discovered" it a few months ago on NetFlix and it has become a guilty pleasure for me. The stories weren't as good in Season 2 as in Season 1, but we watch because we like Castle and his family, Beckett, Esposito, and Ryan. The interplay between them is good, and they seem like real people who care about themselves without any artificial melodrama.

There are also some cute inside jokes thrown in. On a Halloween episode, Nathan Fillian was dressed as a "space pirate," in the identical costume he'd worn in FIREFLY. Jon Huertas, whom we'd both said looked familiar but we couldn't place, was dressed as a grunt, causing us both to sit up simultaneously an yell, "GENERATION KILL!" These were Easter eggs we got because we were fans of the other shows, but those not on the inside did not have their enjoyment or understanding of the story hurt. The show is full of little things like that.