It's that time again. My second novel is out now.

After narrowly surviving a vicious knife attack, gangland detective Eoin Miller thinks he’s earned a break from hunting down thieves, runaways, and stolen drug money. But when crime boss Veronica Gaines tips him off to a particularly sensitive new case, his Romani blood won’t let him say no. A rapist is targeting immigrant girls, and the half-gypsy Eoin knows all too well just how little help an outsider can expect from the local police. Besides, his client isn’t looking for someone to arrest the bastard. He’s looking for someone to stop him—for good.

But the deeper Eoin digs, the more tangled he becomes in a web of corruption, racism, and revenge…especially once his troubled past threatens to derail the investigation by raising questions about his own loyalty and family ties. With his life teetering on the brink of disaster, Eoin realizes there is a fine line between justice and punishment. Now it’s up to him to decide just which side he’s on.

It's book two of a trilogy. Does that mean you have to have read the first one? No. Each story stands on it's own two feet in addition to serving the overall story arc. The first Matt Scudder book I read was the fifth one in the series. But be warned that Runaway Town pays no respect at all to the concept of spoilers, and a few things revealed in book one are taken for granted here. 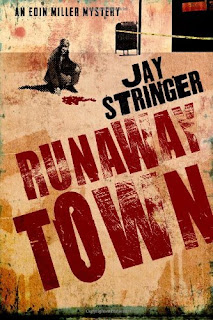 And here's the links to buy the hot sexy little thing for both the US and the UK.

Here's a link to the (unofficial) soundtrack album on Spotify.

And here's the much more official single to coincide with the release of the book. It's by 8-Bit Ninjas, and it's less than a quid in UK money. In fact, right now you can buy the kindle version of the book AND this song and still come out cheaper than a cup of high-street coffee. Spotify  Itunes Bandcamp.

Thank You.
Posted by Jay Stringer at 3:00 AM

i've heard good things about this one