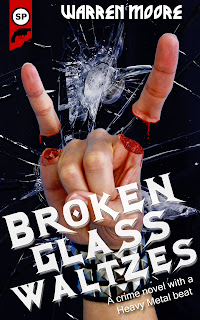 Broken Glass Waltzes is the latest release from Snubnose Press. Here's a quick Q&A with the author, Warren Moore.

1) Give us the background for BGW. It's been floating around for awhile now hasn't it?

It’s your basic twenty-year overnight success story. I wrote it just as the hard rock world was shifting from spandex to flannel, from glam to grunge. I shopped it around with agents for a few years, and had a couple of close calls (including with at least one pretty well known genre press, despite the lack of an agent), but it never quite connected. Meanwhile, I was working as a journalist, then as a dad, and then through the Ph.D. program and the tenure track, so I more or less put it in a drawer, showing it to friends and the occasional student from time to time. But I always thought it deserved better, and when I discovered Snubnose, I figured it was worth a shot. Fortunately, they agreed. One of the things I’ve learned over the years is that sometimes grim determination can beat talent, and while I’d like to think I have some of both, there’s a lot to be said for the first.

2) Tell us a little about the book?

I think it’s in the classic noir tradition, with a protagonist on the fringe of polite society (Kenny) who meets the Wrong Girl (Jean). But instead of the diners and dive bars of James M. Cain and Jim Thompson, I dropped it into the world I knew, from playing clubs of various sizes in original and cover bands, and from watching more successful bands on the same stages. Thompson himself said in Savage Night that there are only so many stories, and I think he’s right – because people are who people have been, and they do what people have always done. The settings change; the trappings change, the fashions and music change. But people remain people.

3) Are you a musician? Play(ed) in bands? Some of the scenes are written with what seems like a lot of been there done that experience.

Yeah, I’ve played drums from the time I borrowed other people’s gear when I was in elementary school (and have the hearing loss to prove it.) I’ve been in a variety of bands over the years, some that did covers, but more that did original stuff from metal to alt rock, which meant (as Kenny notes), that it was much harder to find gigs. Basically, I’ve always been in the “low minors”/weekend warrior category, in part from a lack of interest in whatever was popular, in part from a lack of capital (recording is expensive) and in part because there were things I could do better, like school and writing.

The funny thing is that I’m still doing music – I’m in an original 60s-garage-style group called The Berries, and after thirty-odd years of doing this stuff off and on, my first album will be coming out in the next few months! Again, persistence.

4) Who is the ideal reader for BGW?

Someone who likes their music -- and their stories – loud, fast, raw, and powerful.

I think a lot of them are, particularly in the mainstream/literary worlds. The stuff I grew up reading – genre fiction, typically from the 50s and 60s (my dad was a huge sf fan, but he also read a fair amount of hard-boiled stuff) – had an almost punk rock/garage ethos (That’s right, I think in rock and roll terms as well). “Hey don’t bore us, get to the chorus.” Too many writers these days are like bad bands, showing off chops and technique at the expense of the song. Robert Johnson – frequently seen as the father of the blues – never cut a song longer than 3:01. Do you really think you’re bringing so much to the party that you need six or twelve minutes to do your version of “Sweet Home Chicago”? Likewise, Postman Always Rings Twice is less than a hundred pages, and Killer Inside Me isn’t too much longer. Do you really need 100,000 words, or are you just noodling? I think that once you get past 60-70,000 words, you need to be very careful. That’s not an iron law, but it’s a good way of avoiding the literary equivalent of a twenty-minute drum solo (especially for those of us who aren’t Ginger Baker or Neil Peart.)

6) What's next for you? Any more noir novels?

I’ve got one going right now about a guy who hears from an old girlfriend years after their lives have gone in very different directions. I suspect it won’t end well.

New stuff: American Death Songs by Jordan Harper. Hit Me by Lawrence Block (He’s a huge influence on me, and a super-nice guy who’s still doing really good work). The Cocktail Waitress by James M. Cain – it turns out the old man had one more good book left in him, but it took Charles Ardai to reconstruct it. Signs of Struggle by my colleague John Carenen.  “Peaches” by Todd Robinson. Old School by Dan O’Shea. Everything I’ve read from Eric Beetner – it just isn’t fair that he should have that many talents. And I know there are folks I’m leaving out – honestly, I think we’re in a really strong period for crime fiction. Older stuff: Savage Night by Thompson. Peter S. Beagle’s collection of shorts, Sleight of Hand. Chaucer’s “Pardoner’s Prologue and Tale” (Come on, I’m a medievalist – gotta plug my man GC, father of 14th-Century Noir.)

8) What will your students make of BGW?

Well, I’m already something of the campus eccentric – the English prof who plays in rock bands and used to do stand-up. And the kids who have heard me at campus readings know that I write some pretty dark stuff. Whether BGW moves me from “cool-but-flaky uncle” to “creepy old perv” remains to be seen, I guess, but on the other hand I’m tenured and just made full professor, so I guess I can let my freak flag fly now. (He said, chortling.)

Noir is the heroic romance seen through a prism of cynicism and the recognition that we live in a postlapsarian world. It’s Shane after the frontier is paved over. It’s where even the best people will make wrong decisions that will ultimately leave them doomed – and most people are far from the best. And it’s simultaneously knowing all this, knowing there’s nothing you can do about it, and doing the best you can even though – and maybe because – it’s doomed to failure. Frantic, spiraling doom.

Because Dee Snider of Twisted Sister told me it gives an accurate look at life on the bar-band circuit. Because it has good sex scenes. Because one of my best friends told me he wouldn’t let his wife read it. Because my jaded 15-year-old was too shocked to get past page nine. Because it doesn’t ease up. Because I have a desperate need for external validation. Because it’s fast, loud, and dangerous, like rock and roll is supposed to be. Because it will entertain them.

Posted by Brian Lindenmuth at 3:00 AM

That final answer should draw a sale or two. Cool interview.