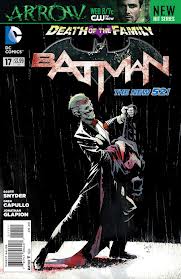 by
Scott D. Parker
Comics don’t often surprise, but Scott Snyder’s Batman has done it. Twice.
I love comics. They are one of the ways I learned how to read. I learned about good guys and bad guys, how functional certain costumes can be, and what kinds of fun quips heroes can utter while battling their villains. Over years, the writers of these tales have gone big (Crisis on Infinite Earth, Marvel Super-Hero Secret Wars), gone small (Gotham Central), and everywhere in between. I’ve enjoyed quite a lot of it, but there’s always a sameness to these stories. Hey, I’m not complaining: I like this stuff and I dig just about every version of certain characters out there, but you pretty much know that, at the end of any given story arc, the heroes will be ready to do battle again.
So it was with a certain amount of joy that I can report that Scott Snyder, the writer for the newly revamped “Batman” title, has delivered two very strong and surprising stories. In case y’all didn’t know, in late 2011, DC Comics zeroed out all their titles and restarted the DC Universe (except for Batman, Green Lantern, and a few others; don’t get started there, okay?). Taking on the flagship Batman title, Snyder, with artist Greg Capullo, have done something breathtaking: they have introduced something completely new to a 70-year-old franchise. When you think about all the writers and artists who have had a hand in crafting the Dark Knight’s adventures, that’s a tall order.
The first arc, Court of Owls, introduces a heretofore unknown secret society that operates in Gotham City. What’s great about this concept is it enables Snyder to bring in various other characters (Penguin, AKA Oswald Cobblepot) and establish their lineage in this city. As Snyder writes him, Batman prides himself on knowing Gotham City. By extension, we readers think we know Gotham City, too. Sure, it’s gone through as many changes as Batman himself, but we pretty much know what to expect. It is with these dual expectations that Snyder plays so effectively, surprising us as well as the great detective. And, in a great bit of planned serendipity, another new title, All-Star Western, is set in Gotham City of the 1880s, giving background to some of the concepts Batman is wrangling with in the 21st Century. Fantastic story, easily one of my favorite Bat titles I’ve ever read.
The second story arc is good, too, but quite a bit more disturbing. Paying homage to the late 1980s run where the second Robin was killed (“A Death in the Family), the new “Death of the Family” exposes the reader and Batman to the new Joker. The Clown Prince of Crime has had a colorful history in his 70+ years, but, ever since the 1970s—and especially since 1988—he’s gone darker and darker, becoming much more scary and terrifying than just the clown you might know from the 1940s comics or the 1960s TV show or the 1989 movie. To be honest, his modern comic incarnation is scarier than Heath Ledger’s version. To showcase just how wacked Joker is in this new version of the DC Universe, his initial appearance in 2011 has him voluntarily submitting to having his face cut off. Yes, you read that correctly: the Joker had his face cut off.
And then he disappeared for a year (real time as well as comic time). He returns in Snyder’s Death of the Family and he proceeds to wreck havoc across the entire line of Bat titles: Nightwing, Red Robin, Batgirl, etc. And it’s bad. It’s shockingly bad, but gripping reading. This past week, the culmination of this story was published and, I’ll admit, there were a few frames in this issue that had my pulse racing fearful of turning the page because I didn’t want to see what I expected to see.
The beauty of the words and art in Death of the Family is how Snyder and Capullo’s depiction of Batman and the characters that surround him. I really like Capullo’s art, easily my favorite since Jim Lee did Hush a decade ago. Snyder digs deeper and unveils more layers to Bruce Wayne than many others before him. And to say that the implications of the ending of Death of the Famlily are profound is an understatement.
If you have a mind, find these issues (Batman 1-7 for Court; 13-17 for Death). There are many more side-titles you can read to fill in the gaps, but I haven’t read them all so cannot comment on them. Heck, just get all of the Batman issues and read them. You won’t be disappointed. With Snyder being a new name for me and liking what he was doing with Batman, I also picked up the new Swamp Thing, also written by Snyder. I was never a huge fan of that character, but very much am now. Great stuff.
Who out there still reads comics? What are your favorite titles? I’m mainly a DC guy, but I am reading some Marvel Now stuff. Any recommendations there, or beyond the Big Two?
Posted by Scott D. Parker at 1:00 AM

I hear very good things about Snyder's run. I think he uses his horror background to write from the inside out; he figures out what would be the biggest emotional fears for Bruce Wayne and then writes outwards from there.

He would have been very interesting on HELLBLAZER, if they hadn't just killed that book.